I've been trying to get an HC05 going with ArduDroid.
They Pair, but I see no way, no means, to Connect.
I power it up, it's blinking at a fast rate ("2pps").
I Pair and it's blinking at a slower rate (1p every other sec). [Not as long, different from the AT?Command mode blink.]
I don't get/find any option to 'Connect'. TechBitar uses the 'action button', but all I get is a list of open "apps".

I found a bluetooth serial monitor for the PC. It has a 'Connect' button to click, and doing so makes the HC05 LED go into that double-blink state (indicating a Connection).

I'm savvy with the wires, it's not that. For that matter, the Pair and Connect action have no Arduino interaction; all that's really required there is power.

Any Masters of ArduDroid-Android-BT out there? 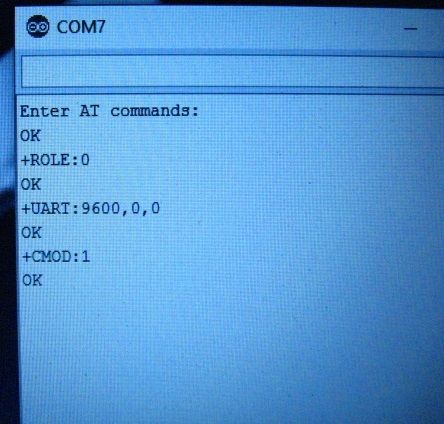 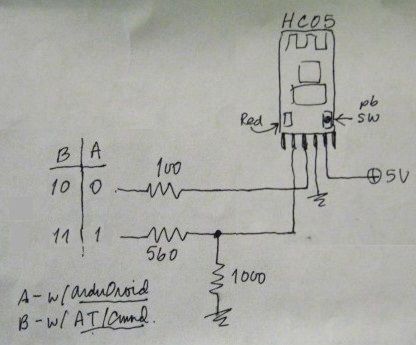 (Wow. Nobody can nail this?)

I found the HC-06 that I was looking for ("linvor").
No difference with it. According to the Android, it Pairs, but that's it.
Its STATE LED stays in fast blink.
Nothing results a "Connect with?" option.
Must be some setting in the Android (??), but I cannot find it.

I'm reading that Les Androids have a problem with these HC devices.
Need to change/modify the CLASS parameter
AT+CLASS=1
Dying to try this out.

No joy there.
Got no reply to an enquiry: AT+CLASS? results a nothing, which is better than an 'ERROR', but not by much.
AT+CLASS=1 results an OK, but to no good end.
Sucks.

Had to give up on "ArduDroid".
I found another app, though - Bluetooth Terminal HC-05 by mightyIT - $1.49 to turn off the ads.
It only has 5 buttons, but you can store whatever text you want sent with each or just go on-the-fly.
Eureka - something that works!