is there any way to actually get power from arduino uno usb connector?

I have my arduino uno running on 12v dc , and I would like that the device connected to its usb would receive power from it.

Is there any way to accomplish this? Maybe rewiring or re programming something FTDI related?

Thank you very much indeed

I don’t think so without rewiring.
On an Uno for example, T1 prevents 5V from backflowing into the USB port.
So you need to short out T1, and also F1 if you want more than 500mA. 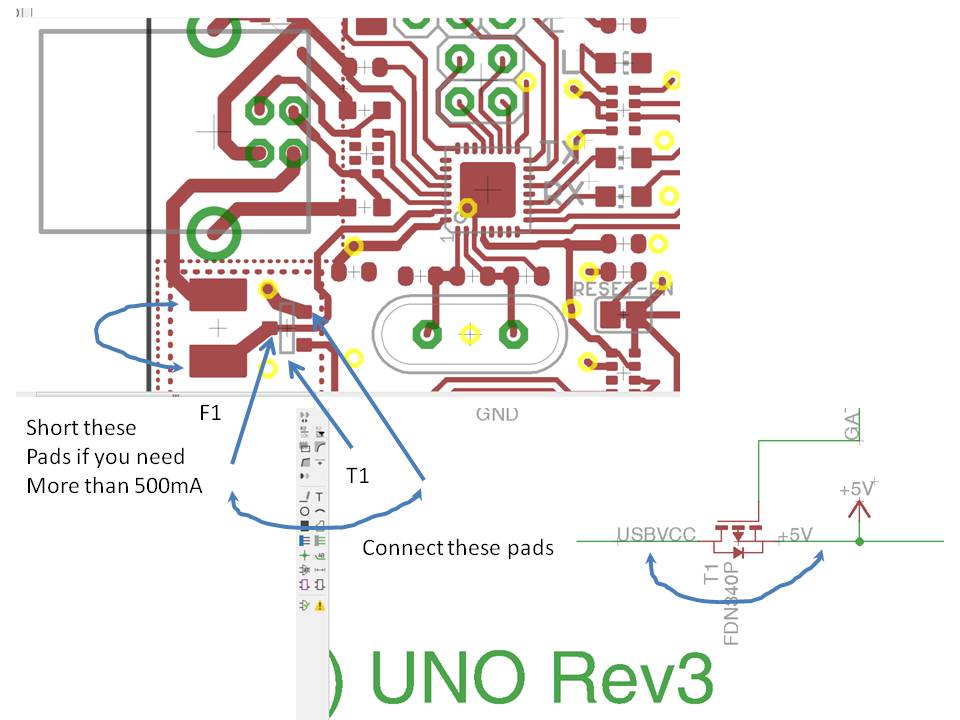 T1 is already conducting if you supply less than 6.6volt on Vin, or less than 7.3volt on the DC jack, or 5volt on the 5volt pin.
Leo..

So in this case P-channel FET T1 is Not conducting, but gnappoman wants 5V available as USBVCC.

Hence the need to rewire it.

Yes, got that.
I think it's easier to change the supply than to hack the mosfet circuit, so I threw in the options.
Leo..

hello!
thanks for your replies!

So It would be enough to, say, feed it with 7v from the dc jack to be actually be able to draw current from usb port?

Would this be regardless of the device connected to it (for ex a tablet in host mode)?

I mean, shouldn't I follow a tutorial like the following one and reprogram ATMega16U2 in some way?
http://www.kevindemarco.com/2014/01/02/arduino-uno-as-a-usb-hid-interface/

I explain my full situation:

I would like to control arduino via an andorid tablet (via droidscript) while charging it.
So that finally I would have just a single power source (arduino DC jack).