I found a couple threads that started discussing this, but they all seemed to be dead ends with no concrete answers.

Does anyone have advice on exactly what needs to be changed or modified in the library/pins/whatever files to make the 100-pin SAM3X8C work as a Due?

My project requires two CAN buses, but does not need many other I/O's. I already have my code working perfectly on the standard 144-pin SAM3X8E Due. What is required to "port" my code over to a 100-pin SAM3X8C?

The reason I need to use the 100-pin version is because I have limited space on my PCB, and have no need for the 144-pin Due's extra I/O's.

If anyone has any pointers, that would be a huge help, Im happy to compensate anyone for their time...im just spinning my wheels here trying to figure it out myself.

Do you have enough space to mount a Teensy 3.6 as a sub-board?

MorganS:
Do you have enough space to mount a Teensy 3.6 as a sub-board?

If the Teensy 3.6 didnt have the SD Card reader on there, it would probably fit.

Its going into an automotive OBD port enclosure. About 1.8" x 1.5" PCB size, but I can have two PCB's stacked on one another via a header.

Originally I was going to use a smaller ATMega32u4 (leonardo) and then interface to CAN with two MCP2515's but there isnt much info out there regarding handling two MCP2515's at once on the same SPI bus.

Using CAN on the Due is sooo easy (plus its got two CAN controllers built in) and much faster compared to the MCP2515 and 8-bit ATMega.

My code already works on the Due...just need to get it working on the 100-pin version. 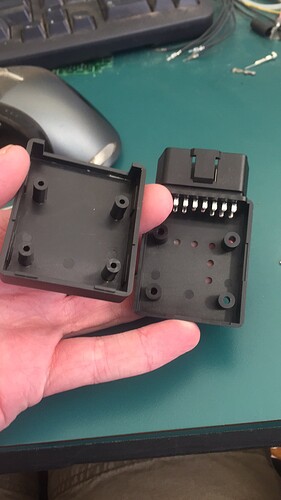 @duramaxhd. Did you get your problem solved (Does anyone have advice on exactly what needs to be changed or modified in the library/pins/whatever files to make the 100-pin SAM3X8C work as a Due?). We are also looking at using the 100 pin SAM3x8C and interested in finding out Arduino IDE support for the same. Thanks

Have a look at DUE Core, a 100% arduino DUE compatible board with a much smaller foot print.