Eclipse support for Due

I've been using Eclipse with the AVR plug-in and Jantje's Arduino Eclipse Plug-in to successfully develop for the Uno and Mega. However the Due is giving me grief. Would greatly appreciate anyone's suggestions about what I'm doing wrong.

I get the error below which is pretty self explanatory but I can't figure out what to do from here.

Can anyone point out what I'm doing wrong?

Thanks for reading this far.
-Devon

I'm confident that I didn't play around with those files so not sure how MAKE went on walkabout. Maybe it's not just me.

I just paypaled you a token of my appreciation.

I checked the installation file of arduino for mac.
My conclusion is that It is not related to you. It is a bug in the plugin which seems to only manifests on mac.
Linux seems to have make anyway and I just tested on windows. It works there as well.
So it is something overlooked on the mac in the plugin during testing.
Thanks for the token of appreciation
The problem is logged here: due compilation does not find make file on mac · Issue #68 · Sloeber/arduino-eclipse-plugin · GitHub
Note stick to 1.5.2 for now. 1.5.3 and 1.5.4 will never be supported by the plugin and discussions for 1.5.5 and later are still ongoing with the arduino core team.

On your webpage (http://eclipse.baeyens.it/) it still says:

Maybe you should change that.

Currently i am working on linking of Arduino 1.5.2 and Eclipse Juno with Eclipse plugin for Arduino.
Install New Software is successful.
But when i try Windows -> preference and try to give path of Arduino installation OK button is not activating. 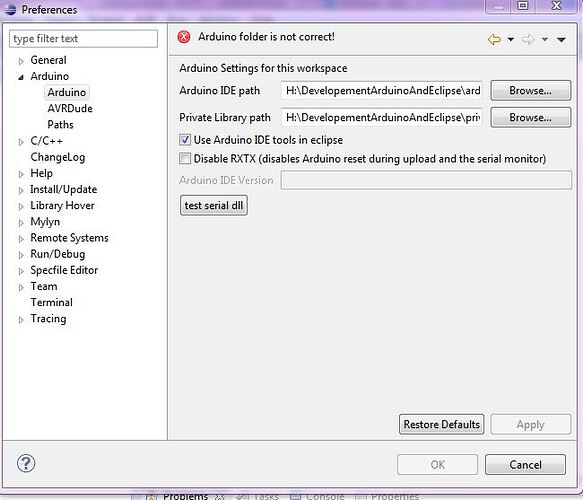 on top it states "Arduino folder is not correct"
That is why you do not get OK enabled.
Jantje

I have given the correct path. One question we need install the Arduino ide or unzipped folder is ok?
When i try to give path of 1.0 version OK button is enabled.