I am trying to make a "laser gun range" like the ones you see at carnivals for my embedded systems class at school. However, I am having trouble because I do not know how to construct the "target". I want to be able to point a "gun" at a target ranging from 4cm to 0.5cm in radius, and I do not know how to detect a laser pointer over that range. CdS photoresistors are very small. I have also looked at IR but as far as I know you cannot focus it. I need help in coming up with a detection method. Bonus points if I can detect whether someone hits the center or edge. If necessary, I can also switch to mechanical Nerf gun range, but then I have to come up with a target with moving parts and have to detect how many bullets were shot and if the target is down somehow.

Background: The focus of the course is "the correct way" to write programs that run on small microcontrollers using state machines. For the end project we have to create a game that uses an 2x20 character LCD, a 16-button keypad, an LED, a button, a speaker, and a seven-segment display all on an ATmega32, which shares a similar peripheral set with the Arduino. I can even use an Arduino Mega with the condition that I write all code myself. (no Arduino.h) I know how to use all these devices and shift registers to give me more I/O. I just need an idea to implement.

I have also looked at IR but as far as I know you cannot focus it.

It will have a different focal point to visible light for a given lens, and some lenses may not transmit IR as well as visible, but to say you cannot focus it is incorrect.

Alright IR can be focused, but I do not know which lens to buy or how to make the mount or even the IR source (laser?)

I did find the exact product I wanted though. It is called the Laserlyte and when you point a laser at it, it records the spot you hit with about half centimeter accuracy and the displays them to you. I currently have no idea how it works and am speculating that it uses a matrix of LEDs and a matrix of...something else to detect light. I was thinking maybe he used a bunch of really small SMD LEDs and detectors, but then how does the detecting work?

Most of the affordable IR sources both lasers and LEDs are in the near infrared and regular glass/plastic works fine as a lens. I guess the targte could be made up of an array of photodiode or phototransitor of the size you want and make sure the spot size of the laser is large enough to bridge the gaps in the target array.

Alternatively, defocus the laser until you get a spot size equal to one-half the target size and use one photo-diode or -transistor. I like this method better.

Be careful on the power of the laser as IR can easily cause permanent eye damage. Saftey is another reason the second method may be better because a large spot size will have a lower power density than the same laser focused tightly and thus less apt to cause eye damage.

I agree with wwbrown and suggest you defocus the laser. You can then arrange 4 photoresistors or phototransistors into quadrants. To figure out where the beam is you would measure the top - bottom signal and the left - right signal. This is how most atomic force microscopes work. 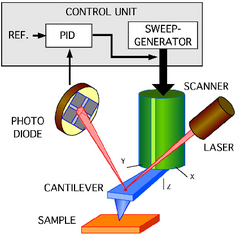