I'm working on a parachute ejection system, something like this here: 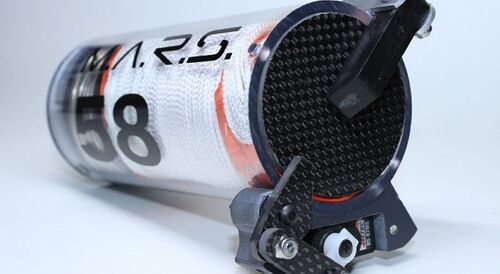 My device is controlled by an Arduino Nano.

Now I'm looking for something to release the hatch. I don't want to use a servo, because, from what I know, servos always draw power. So I'm looking for an alternative mechanical part.

In everyday language I'd say: An electronically controllable deadbolt

Something like this here with an electromagnet or an electromotor or ...

But I have no idea how such a thing would be called - so I can not even google for it.

If you use servo.detach() then the Arduino stops sending it a regular pulse to hold it in position, at which time I'm pretty sure the motor itself will draw negligible if any current since it's not trying to keep position.

If the servo is not being loaded, ie there's no force trying to move it, then even with the servo attached there's probably very little if any current.

Searching for "solenoid" might help, or "solenoid deadbolt" or similar?

You are allowed to switch the power into a servo if you want - just be sure to use
a big enough PNP or logic-level p-channel MOSFET to do high-side switching
and take the current peaks.