Nothing special, but potentially a life saver

and fun to hack. 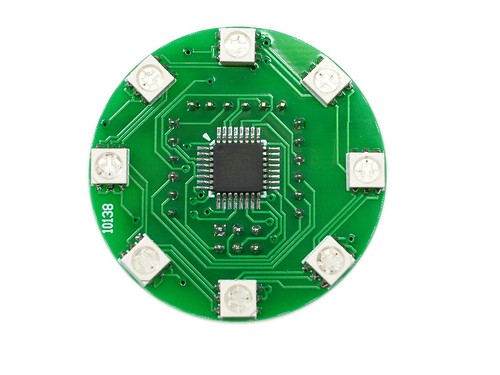 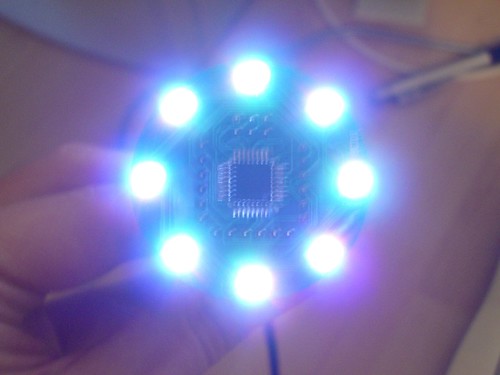 In high brightness mode it just turns the LEDs on/off as programmed by the user. As color is set for the whole circle, some restrictions apply. In PWM mode each LED can be freely controlled with respect to brightness/color, but due to multiplexing the overall output is lower. During night time this shouldn't matter too much.

Once I get a set of spare LEDs and have my second board up and running again I will test it on my bike using a perfboard adapter for batteries + boost converter.

Is anyone else thinking what Im thinking they could be used for?
BIG ROBOT EYES!!!!!!!!!! There perfect for bicycles and robot eyes!

Be sure to check legal restrictions where you live: in the US, some states get very nasty with people who put lights on their vehicles that even an unreasonable person who's been drinking heavily might momentarily mistake for those of a cop car or fire truck.

Whats the board and where do I get it thanks . Can I see the code?

awesome i could do with one of them

I know. Strictly speaking my LED head light is illegal as well, as it runs on battery, which is only permitted for racing bikes below 11kg in this over regulated country.

But I'd really like to see the one who mistakes me riding my bike with a police car, let alone a big fire fighter truck.

You can have a look at the code here. It is pretty straight forward and easy to modify. I rigged it up with KiCAD and ordered 2 at BatchPCB and got 4, 2 left over.

It runs with an ATmega168 @ 8MHz with the Lilypad bootloader. To program it, connect it to an USB/TTL adapter and press upload in the IDE. To program it again, disconnect and reconnect. The bootloader waits long enough, so the timing is not terribly critical. It works pretty well without auto reset.

If you need more you could get them at batchpcb, if you tolerate their handling fee. They have the design files. Maybe you'll be lucky and get more boards too. Say the word and I'll send you the link via PM.

Not bad either. A lot brighter, bigger, cheaper and seems to use a PIC. This would fit a truck as back light.