Fade in and out interruptor without delay

Hey guys. I made a project to fade in and fade out for wall interrutors. The idea is when you flip the switch to turn on the kitchen light, for example, it will fade in light slowly instead of turning it on immediatlly as usual. And when you turn the switch off, the arduino fades out.

The code is working perfectly for two switches, including no delay, that is, the switches work simultaneously. However, as you can see the variables and functions are repeated for each switch that is added to the code. I would like to rewrite the code, creating a variable to tell how many switches will be used and using arrays (or otherwise) to write the fadeIn and fadeOut functions just once. So, every time you call the fadeIn function it will be the same function, but it would take into account which switch was pressed and then the fadeIn function would be executed to fade only this switch.

I tried using arrays but no sucess. Any suggestion? Thank you in advance

You might consider using a structure or class to represent each "fader" object -- which consists of a PWM output pin and a button/switch input. Declare all the Fader objects you need and then form an array of pointers to these objects. You can then leverage the array and update one object each pass of loop. For example:

This compiles but isn't tested. I'm not really good at class stuff and probably screwed this up but I think this conveys the idea I'm trying to get across.

Well I think a timer including the dim function as methode and a structured array containing all relevant data should help to design a smart solution.

@Blackfin and @paulpaulson
I estimate that the suggestions you made were way above the head of daniel.

In this shortage as you have described it I estimate it is not understandable for daniel.

sure it can be done with classes, structures and a lot more variants. But as long as you don't provide a very well tested and documented library with examples on how to use your library it would be additional work without orientation.

OK back to daniel:
Your basic idea of having a single function for fade-in / fade-out is good.
Also having variables (eventually as array ) for each light is a good idea.

You have to clarify what belongs to a "general pattern" and what has to be individual.

With general pattern I mean what are things that are the same for each button / and the light that is controlled by this button.
reading in the button's state
and if button is pressed start fade-in / fade-out

This has to be done for each button-light-pair

quite a lot of variables

arrays can be used.

and as you want to minimise writing code you don't write

you write a loop

and this principle is applied to each variable.

you can pack together multiple variables into one struct
and then create an array of this struct.

for your second button

What I have written so far gives you a rough picture of the principles
andI'm pretty sure that it will take some time to think about it, to re-read it
doing some prelimary tests

NOT with your full code !

sure it can be done with classes, structures and a lot more variants. But as long as you don't provide a very well tested and documented library with examples on how to use your library it would be additional work without orientation.

For the basic coding in C++ no libaries are needed. Only the unterstanding of the brilliant instruction set to code smart sketches. That´s all you need.
Have a nice day and enjoy coding in C++.

Guys you are amazing. This is my first forum post and I didn't expect a help so quickly.
I'm really new in this area. I'm studying computer science in my third semester. Still very early on, but yes I've heard about object-oriented programming, but I still don't understand it very well.
I really appreciate your help. As mentioned, I will take some time to digest the information and test it until I get it. As soon as I get it I'll be back to let them know the progress.

I estimate that the suggestions you made were way above the head of daniel.

This is possible but if so then it's likely this is too:

I did end up testing my code on my 2650 using the built-in LED and it worked.

Perhaps the class approach just looks complicated because it includes some fluff like class member functions setFadeInterval, setFadeIncrement and setFadeMaxMinPWM instead of just using constants.

If the OP is unsure of classes he could always reference the Arduino tutorial on the subject.

This is possible but if so then it's likely this is too:

a little less difficult to understand because it takes the variable-names of the TO's code and has quite a lot of text around it that tries to explain it.

It doesn't require a class but a class is one way to do it, which is why I wrote "...structure or class to represent each "fader" object..."

Hello
Here comes my class-less but OOP oriented proposal sketch for your fader project and OPP studies.
It has been successfully tested for one block of switches and LEDs. You can extend the sketch to more I/O´s by changing the declarations of I/O pins and adding the related entries to the array. Thats all and very easy to use. Therefore no changes inside the coding are needed.

Have a nice day and enjoy coding in C++.

Nice. But "oH gOd Its ToO CoMplIcAtEd fOr tHe Op" - someone here, inevitably.

Guys, thanks to your help I managed to advance the code. It's not ideal yet because I haven't used structs, but at least I was able to use the arrays and thus a single function for all the leds reusing a lot of code. I will keep studying to understand structs and try to use it. 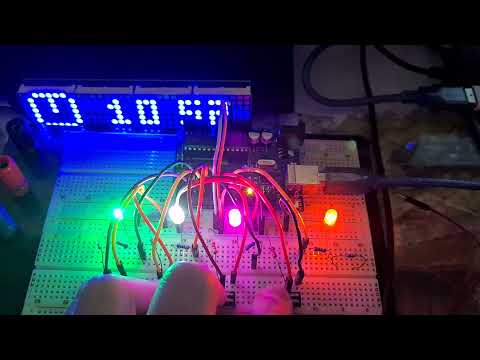