Im building a mini automobile computer for my 89 Toyota. It will display air temperature from 3 locations, voltage at 2-3 locations, and fluid temperatures at 3-4 different components.
My question is about finalizing a project. Ive seen that many say you should not use an Arduino board, like an UNO, to build the final product.
That you should use a "stand alone board."
Is the Nano considered a standalone board? Or is it something else?
Given that my project will be reading so many sensors/voltages, I will need about 10 analog inputs. The nano only has 7?

What are the pro's and cons of using the Analog Mega or Due as final project boards?
Are there "standalone" boards that have over 10 analog inputs?

What are the pro's and cons of using the Analog Mega or Due as final project boards?

Pros: They do what you need. They work.
Cons: Once used in the project, they are not available for use in other projects. They contain things that, in the final project, never get used, like the Serial to USB converter (which means that they cost more than a chip that doesn't have unused components).

The arduino line of products (Mega, due, Uno, Nano) are development boards the come with other support components like a voltage regulator, polarity and over current protection, as well as a usb chip on board among many other extras. "Standalone" usually means just that and not much more or precisely only whatever your specific application calls for. People usually switch a completed project over to a standalone processor because its cheaper than the development board ($4 versus $10-$50) and the development board is more suited to prototyping anyway. you might consider a digital thermometer like the ds18b20 because multiple sensors share the same data line (onewire device).

Here is an example of a standalone board. 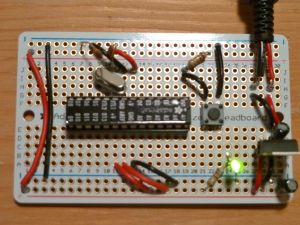 Recently I purchased enough parts to make 10 Arduinos, following this tutorial. The reason for this is that you get a price break on most parts when buying 10 or more. Because of this, I was able t…

Personally, I will always use my development board for the final project, because it's still pretty reasonable in price, and as someone pointed out, it works. You have to be aware of a few things, though. Plastic breadboards are not really suitable for a final project. Their pins are a bit dodgy, and are susceptible to vibration and temperature changes. The pins on a "shield" are much better. I will use solderable prototyping boards for the final project, though.

That being said, if I develop a project on an Uno, and can see that a Nano or Pro Micro can easily handle the task, I'll switch the project over and use that. Lower cost and smaller size wins in that case.