This is a Breakout board for the Lepton Thermal Camera Module. This board provides the socket, power supply's, 25Mhz Crystal Oscillator, 100 mill header for use in a breadboard or wiring to any host system such as an ARM based Arduino or a Raspberry Pi.

The FLIR Lepton™ is the most compact longwave infrared (LWIR) sensor available as an OEM product. It packs a resolution of 80 × 60 pixels into a camera body that is smaller than a dime. This revolutionary camera core is poised to equip a new generation of mobile and handheld devices, as well as small fixed-mount camera systems, with thermal imaging capabilities never seen before.Lepton contains a breakthrough lens fabricated in wafer form, along with a microbolometer focal plane array (FPA) and advanced thermal image processing.

This board will accept from 3-5V input and regulate it to what the Lepton Module wants.
To read an image from the lepton module all you need is an SPI port.
To configure the camera settings you also need an i2c port, although this is not required.
The PCB has the same size and mount holes as the standard raspberry camera

Why did you make it?

There Currently are no other breakout boards for the Lepton Module. In addition the Lepton module requires a special socket to be used that is difficult to solder down (and hard to buy). This board make connecting the Lepton Module to something like the Raspberry Pi much simpler.

Where do I get a Lepton Module?

You can preorder a breakout board from tindie.com
Shuttered Flir Lepton Thermal Camera and Breakout from Pure Engineering LLC on Tindie

The minimum order for the modules from FLIR are 1000 modules. We are working with GroupGets.com, A crowd-funding site for buying stuff. This will allow you to buy just a single module (or more). Please go to this site to buy a module, We already talked to FLIR, unless you want to buy 1000, this will be your cheapest and best option. You will be getting the same pricing per module as if you bought 1000! The alternative option is to buy a Flir One, tear it apart and pull out the module.
Lepton® 2.0 by TELEDYNE FLIR | GroupGets

I want more Info!
A Google groups page has been created here: https://groups.google.com/d/forum/flir-lepton Questions can be asked here.

Here is a video taken with the module how to connect to Arduino? 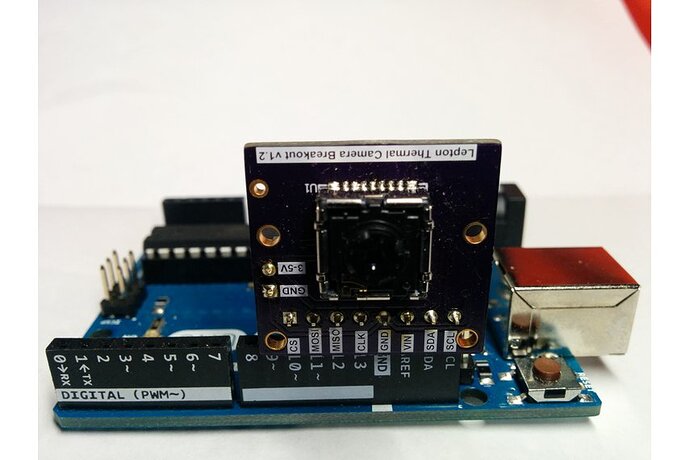 On the video, I have the colors inverted

I have a Question. Does the FLIR Lepton breakout board function with the Arduino Galileo borad?

I have a serious question about this. The breakout board is made to fit onto arduino boards, but as I understand it only the Due, with a different pinout, has enough memory to actually capture an image off the board. What is the benefit of lining the pins up in that fashion?
I'd like to know if anyone actually has got this board to function on an Arduino of any flavor beyond just sending it commands, as in can I communicate with the camera while obtaining images?
donfelipe

which arduino have you taken in the posted picture?

pureengineering:
for power you can reroute the 3-5V to the VREF pin, then you have a nice clean solution.
You have to use a Ardunio with at least 16k or ram so you can buffer the image.

Does this re-routing also apply to arduino Due?