Hi there, I have another question for you.
I'm currently working on a project, where I control two motors with two switches. Here is a schematic of the project: 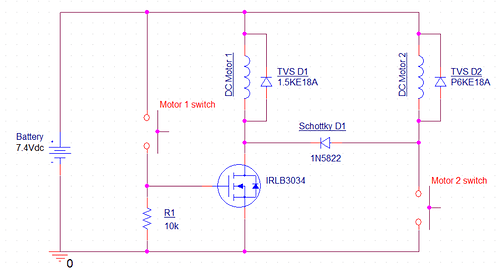 1127×617 51.6 KB
First motor is stronger than second one, it needs to be switched via mosfet. Second motor does not need one. When I press first switch, it opens the mosfet and turns on both motors. But if I press second switch, it should turn on the second motor only, because the first one is in series with reverse-biased schottky diode. I want to use schottky diode for this to minimalize forward voltage drop when running both motors via mosfet.
The design also contains two TVS diodes as flyback diodes, protecting the mosfet, one for each of the motors. Beefier one rated for 1.5kW is next to bigger motor and it should work just fine. The problem - and the reason why I'm here asking you for your help - is with the second, smaller TVS diode.
First off, the second motor should consume around 1-2A at maximum, its likely its even less than that. Schottky diode is forward-biased towards it and is rated for 3A. TVS diode in parallel is rated for 600W, which is probably way too much, but it shouldn't matter that much.
The problem arises when I think about what happens when the second motor is turned off. Magnetic field of that motor collapses, has nowhere to go, so it results in increased voltage. That is the reason why there is a TVS diode after all. But there is also forward-biased schottky with very low forward voltage drop. I'm afraid that when the second motor is turned off, the voltage goes up and flows through the schottky rather than TVS, rendering it useless. In that case, I really have no idea how big that voltage/current spike of the second motor is and if it can fry the schottky diode or even the mosfet itself.
So my question is - is the second TVS diode useless? If so, what can I do to tackle the problem? Or maybe because the magnetic field will always collapse only if the mosfet and switches are turned off, the energy has nowhere to go except for the TVS diode, so it will work just fine?
Thanks in advance for your opinion

You don't need a TVS diode across the motor terminals and it doesn't add any protection, either. Any diode (1N400x is fine) that can conduct the maximum expected motor current will work.

Your analysis suggests that you don't fully understand how "flyback" diodes work. This is not correct:

when the second motor is turned off. Magnetic field of that motor collapses, has nowhere to go so it results in increased voltage

The collapsing magnetic field causes the current to continue flowing through the motor, but circulating through the flyback diode in the forward direction until dissipated by resistive losses.

And in fact, that effect is quite minimal for motors, so you generally do not require a particularly heavily rated diode.

The exception is series-wound motors, but you are relatively unlikely to be using these in a DC situation; they are nowadays used almost exclusively for AC mains appliances. Permanent magnet or shunt-wound motors have "kick-back" only due to leakage inductances.

rigel:
Thanks in advance for your opinion

Maybe you can try a power diode instead of the shottky.

The diode is a "free-wheel" diode here, as it allows the current to continue (freewheel) as the magnetic field subsides. A freewheel diode just dissipates power in itself and the winding and only sees low voltage (the DC supply). Pretty much any old diode will do, efficiency is of no concern.

A "fly-back" diode is part of a fly-back transformer high-voltage power supply circuit in an old TV or other fly-back converter. A fly-back diode carries useful power from a transformer undergoing field-collapse to a filter capacitor at high voltage - the diode has to be low capacitance, high speed and high voltageas
efficiency is important. Fly-back converters are used for very large voltage step-ups as the combination of
the transformer ratio and inductive kick can easily generate kilovolt levels from a low-voltage DC powered
circuit. The commonest example is the camera flash circuit used to generate 300V or so from a 3V powered
digital camera.

The name fly-back comes from the combined circuit in old TVs which generated the sawtooth horizontal
beam-scanning waveform and the EHT supply using a single circuit of this type. The electron beam scans
left to right then flies back to the LHS as the diode conducts.