I found this little FM-Tranmitter module on ebay for very cheap and wonder how I can use it, where to find an example for this module.

There is no description with it, just that 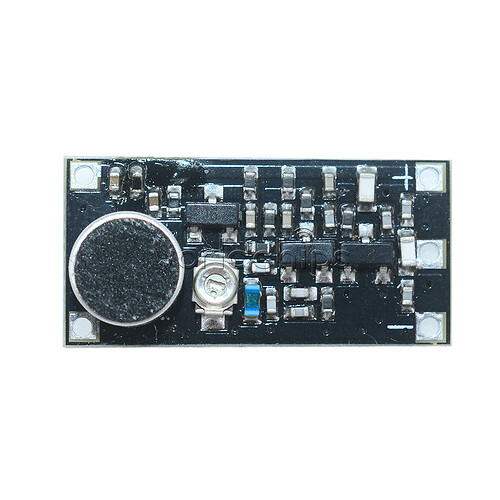 The module is designed to transmit voice signals picked up by the on board microphone to a nearby FM radio, and that is how you would use it.

Do you have any example code for it? Or a exact module name so I could find some in the net?

It is not for an Arduino. It has not a fixed steady frequency. It is not legal.

If I remember it correctly, then in Europe is a FM transmitter allowed, when the output power is maximum 50 nW. That is 50 nanoWatt. For a distance of 1 or 2 meters.

There are FM transmitters that can be controlled with an Arduino. For example the Adafruit Si4713 module. I don't know if it can be set to 50 nW.

OH! It is illegal.

But anyway, is there anybody who knows this little module? Knows any data of it and connection pins?

franc:
Knows any data of it and connection pins?

From what the others have already said, it doesn't have any: you tune a radio to its frrequency, talk into its little mic, and listen on the radio. It's probably meant for use in a baby monitor or something, although 1-2m is a bit short for that.

So that in the article desription it says "...Module For arduino" this is just a advertising trick, I guess?

They wrote "module for arduino" probably because that is used a lot. It could be an advertising trick.

Go here: http://www.drexprojects.com/modules.html
Scroll down to halfway in that page until you see your FM transmitter. There is a picture that shows which pins are + and - and a pin for the antenna. On some modules the pins on the right are labeled + and -.

It does not have a name, therefor I can't search for a schematic.

Actually it differs by region. See:

The FM broadcast band is a range of radio frequencies used for FM broadcasting by radio stations. The range of frequencies used differs between different parts of the world. In Europe and Africa (defined as International Telecommunication Union (ITU) region 1) and in Australia and New Zealand, it spans from 87.5 to 108 megahertz (MHz) - also known as VHF Band II - while in the Americas (ITU region 2) it ranges from 88 to 108 MHz. The FM broadcast band in Japan uses 76 to 95 MHz, and in Brazil, Fr...

They wrote "module for arduino" probably because that is used a lot. It could be an advertising trick.

Absolutely, and it worked!

The OP bought one, thinking it could somehow be used with Arduino.

No great loss, as the cost is quite a bit less than a good cup of cappuccino.

Koepel:
They wrote "module for arduino" probably because that is used a lot. It could be an advertising trick.

Great! Thank a lot! That is the info I looked

Yes, indeed now I am secure, that this "module for Arduino" is a pure selling trick

Yes as well, the cost ist very low, but not as high as a good Cappuccino Cup, at least not in DE

These selling tricks from China I know more and more. Not only with "For Arduino", many other tricks as well.

Just had the time to test it, it indeed works!
Very difficult to set a frequency and nearly impossible to set exact a frequency but it works and with 9 volt it sucks 30 mA around. Send power enough to transfer some rooms in our flat.
Nice toy and very tiny

Again: nothing to do with Arduino, so now this seems the wrong forum