From bread board to real life?

I made a circuit of 5 sets of two LEDs in series with a 1K resistor that are activated by a PIR motion sensor on different time settings. It's working fine on a bread board (though the LEDs flicker a little and I couldn't decide if that was bad or not.)

The intention is to put the sets of LEDs into the bushes out front - so that when someone walks by 5 sets of "eyes" light up.

My question is - how do I take this from breadboard to real life? I have a container that I was going to put the breadboard and Arduino and power source into - probably the PIR and light sensor too. I know that basically I need to connect (solder?) the LEDs to longer wires but do I also need to solder them to the breadboard? no right? cause that would ruin it for later - so what else should I use? And is there any special wire I should use?

Obviously, I don't know a whole lot about electric work. I wouldn't have come to the forums with such a simple question but I was having a hard time googling it and just want the best and straightforward advice.

You can get an Arduino Pro Mini, mount it on a proto PCB then hand wiring external components on the PCB with solder point to point wire wrap wire.

Example of point to point wiring: 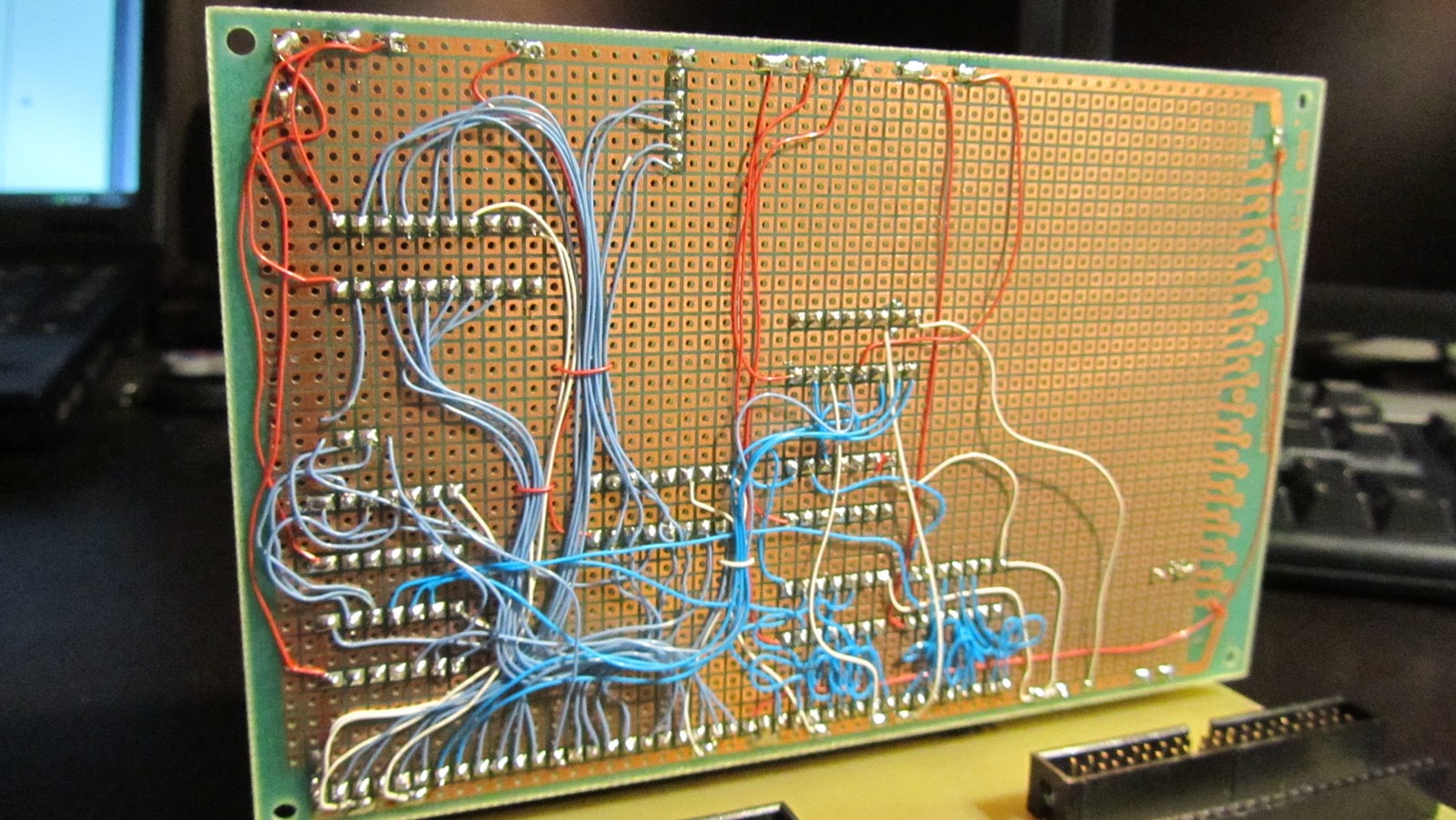 With a protoboard you can place your led and resistors in the holes and solder them permanently in place. You can make connections by adding in wire and tacking it to the pads as you go.

Do not solder to a breadboard. (I am not even sure if that is possible)

Hope this helps a bit.

You can buy protoboards with the same pattern as the breadboards, to aid in connecting things up correctly. For that application, I guess jacob84401’s answer is best. Those boards are really good to work with.

For other, more sophisticated projects, consider that nowadays you get custom-made 5x5cm^2 PCBs for < 15$. It will take it’s 4 weeks shipping, but depending on the project, it might be well worth it to learn a little KiCAD and wait, instead of hand soldering a complicated circuit.

ElCaron:
For other, more sophisticated projects, consider that nowadays you get custom-made 5x5cm^2 PCBs for < 15$.

Any additional info on where this cheap price comes from? I only know of places that have quite large minimum board are or Fritzing Fab which is considerably more expensive than that.

http://www.pcbway.com/member/login.aspx?returnurl=http%3a%2f%2fwww.pcbway.com%2fmember%2forder%2forderprogress.aspx However you have to pay for shipping.

You really don't "have" to get perfboard or circuit boards made for your simple circuit. You could just solder the leds to wire and even your resistor in series with the wire. You can then have the flexibility to move them around as you please. The thing to do is get some heatshrink tubing to insulate the bare wires and leads of the components. Use the wires to bend it around and not the leads of the components. The leads will break if you keep going pretzel on them

As for the size wire, you are not pulling any serious current, so 28ga should work just fine. Just get 2 different colors so you can keep track of positive and ground.

polymorph: You can buy protoboards with the same pattern as the breadboards, to aid in connecting things up correctly.

Those are great if you've put a lot of work into optimizing the layout and connections using a solderless breadboard. The fact that they fit almost perfectly in an Altoids tin is a bonus! If the board has the connections on one side only, you can easily split columns with an Xacto knife for even more versatility than the solderless original.

saximus:
Any additional info on where this cheap price comes from? I only know of places that have quite large minimum board are or Fritzing Fab which is considerably more expensive than that.

Seedstudio, iTead, Elecrow, …
. All have pretty similar prices for 5x5 double-sided boards. ~10$ + <5$ shipping fee.
Added cost for larger boards, colors etc. varies. They all have online calculators to give you the price.
In my experience (with seed), they have excellent quality for hobbyists. Next time, I will try elecrow, though, since they offer other board colors without surcharge.
Again, note that it will take 3-4 weeks to arrive. So be sure that you plan well ahead. About 20% of my orders I eventually didn’t use because I came up with a new revision or put it on a perfboard since I didn’t want to wait eventually.

Wow oh wow! This is great, thank you very much. I'll let you know if it works!