Although I have used the forum to great advantage on some Arduino projects in the past, I am really looking for a forum where I can ask some question about troubleshooting an issue I am having with a very simple circuit board. I would love to ask for some advise here but wanted to ask if the forum would be receptive so such a thread before posting. A replacement circuit board for this application is not available and a new replacement is $1000. I can't believe I wouldn't be able to fix this with a little guidance. With a couple of appropriate 120V relays, I am sure i could replace with an Arduino based design.
Please let me know if this would be appropriate type of discussion for this forum. If not would you have a recommendation for where I could go?
Thank you!

This is probably as good a place as any.

Just make sure you give as much detail as you can.

Thanks for the invite. Here is all of the detail.

This is the controller board for a Wilshire Chandelier lift. It has worked well since we moved into out home 3 years ago although we don't use it alot. The unit was originally installed in 2002. I have been working on replacing the chandelier and yesterday, when I wasn't working on the system, the motor (120V, reversible AC motor) fired up all by itself and gave off a loud humming sound. Removed power from the system and tested the limit switches and switch the raises or lowers the chandelier and they all tested fine. The motor spins freely.

The chandelier controller is quite simple. There are 2 limit switches that control the high position and low position of the chandelier. There is a toggle switch with a home position with the chandelier is stationary and momentary contact UP and DOWN positions.

The motor is a small reversible 1/4Hp motor with a large starting capacitor.

Right now when I plug the lift into a 120V plug, the motor start turning in the down direction even with the toggle switch in the home position where the chandelier shouldn't be moving. The motor also generates a much louder than normal humming sound. Also the motor ignores the limit switch instead of stopping when the limit is reached.

The circuit board has up and down test buttons. Pressing the down button doesn't change the behavior of the motor. Pressing the up button reverses the direction of the rotation but it immediately reverses direction when you let go of the button. I didn't have a volt meter with me when I was up in the attic so I couldn't test any of the outputs. I may pull the controller board out so I can troubleshoot on my bench but any guidance would be appreciated.

It seems like even when there should be no power getting to the motor, the down direction is always getting power. I Was working on the chandelier in the hour before this problem appeared so I would be foolish to not assume it was something I did but for the life of me not sure what it could have been. I just lowered the chandelier and let it stop with the limit switch. About 20 min later, It started to hum and I unplugged it.

I have attached images of the controller board and the in and out wiring. This seems to be very straight forward. Like I said, if I can't get the board to work, I should be able to replicate the behavior with an arduino.

As I indicated the controller board is not available as the company went out of business and a new replacement list is $600-1000
Appreciate any comments and or guidance. 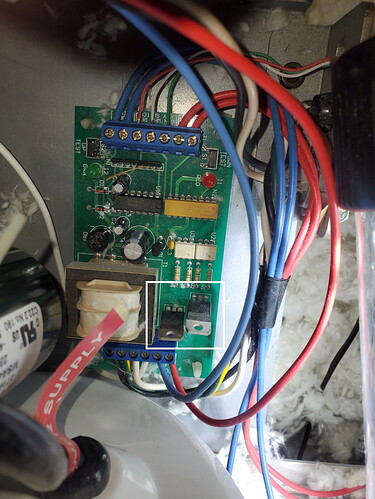 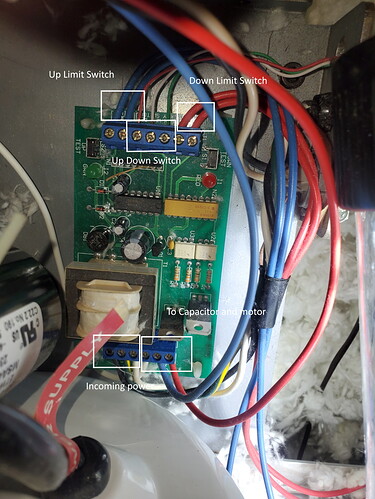 First off I know zero about those things.
That said it does look like somethings an Arduino could probably manage quite well.

Thinking out loud (dangerous) but a couple of opto isolated relays to handle the high voltage side for up/down
and the limit switches wired to a couple of I/O pins.

Then there is the external triggering which I assume is currently 110V.
That would be the only real point I would be a little inexperienced at and would probably just add W-Fi to the Arduino LOL.

Somebody with a little more experience than me would probably throw it on a bench and trace out why it does not behave.
Does not look like the pcb is worth $1000 thats for sure.

Another bling guess: there are triacs driving the motor. One of them is shorted. Find it and replace it.

Thanks. I wasn't expecting anyone to have specific knowlege about this board specifically. I am just looking for people to discuss the issue with and figure out how to get this going before my wife kills me . It seems like I have found that here and very much appreciate it.

The triacs were my guess as well. This is where I am bumping up against the limits of my knowledge. How do I test the triacs to determine if there is a short.

I guess one way or the other , I am going to have to take the board out to make the repair so might as well take it out now. It will be easier to go through the diagnostic tests on my work bench.

This is kind of fun so I appreciate the discussion.

I repaired a device by replacing a shorted triac some time ago. I don't remember how I decided the triac was faulty. IIRC it was simple DMM continuity measuring of the triac inside unpowered circuit - there was continuity between the two main terminals.

If you want to repair the board, check every component with a DMM to see that it exhibits the characteristics you'd expect:

Any PN junction (diode, bipolar transistor) should give about 0V6 when forward biased (most DMMs have a diode check function). It should show open circuit if reverse biased but be aware of the components around it as they will mean some parallel resistance will show up. Any PN junction that shows short or near short should be removed to test further and establish if it is short or if it is connected to something with low resistance, such as a transformer.

Any electrolytic capacitor just replace whether you think it's good or not.

Low value capacitors should test open circuit. Depending on their value you might see them charge and discharge as you swap the meter probes around.

Resistors that test higher than their stated value are suspect.

As for triacs, also test for short circuit and replace if they are.

Any component you have a doubt about consider changing.

As for the transformer, is that just for power? Power the board and check the supply voltage is correct.

Are you sure the limit switches are working and connected securely?

I will try to remove the board tonight so I can work with it easily.
I believe the small transformer is just to create a 24V signal for the switches but need to check the voltages.

Silly question what does 0V6 mean?

With power to the board disconnected, is there any conclusive testing I can do on the Triacs without unsoldering them?

There is a convention in electronics of putting the multiplier / symbol where the decimal point would normally go, so 0V6 for 0.6 volts, 8k2 for an 8.2 kilo Ohm resistor. The reason is to make it much harder to misread, especially in print. A decimal point is easy to miss, a V or a k or a μ in the middle of a number is much more obvious.

I got the board out last night. One of the triacs is discolored. the one triac that was not discolored has a resistance of about 12MOhm. the other one has 1Mohm.
It seems like this device has issues with the triac as it is a common failure point. I picked up a couple of TO220 style heatsinks but not sure if that will help. given where this is located would like to fix so I dont have to do it againn

ijourneaux:
I picked up a couple of TO220 style heatsinks but not sure if that will help. given where this is located would like to fix so I don't have to do it again

Check that the tabs on the triacs are isolated and not connected to MT2. If they are not isolated you will need heatsink mounting kits.

The motor is a small reversible 1/4Hp motor with a large starting capacitor.

It might a run capacitor, not a starting capacitor. By switching which winding is connected through
the capacitor the phasing and thus direction of the motor can be controlled, with full torque from startup.

This would make it a 2-phase capacitor-run permanent magnet synchronous motor. Probably. There are so
many types of AC motor...

Its worth checking the capacitor. You should ensure its safely discharged first. It shouldn't be shorted or be open at AC, but show the right capacitance value and no leakage current.

If the triac's are the failure point and you suggested this is a known issue, I would purchase a more capable triac. Can you read the part number of the Triac and of the opto isolator (the white IC's)?

I doubt a heatsink will be of much benefit. For such a small motor with intermittent operation the triac's would have to be less than marginal.

If I had to guess I would suspect a voltage spike, especially if its a 300V device. You should replace both with a 600V device of suitable current. Personally I would not use NTE devices as a replacement but find a major mfg or triacs.

Here is a link to Digikey's triac page 600V TO220 Triacs you may find it helpful.

The triacs are BTA12 600B. The opto isolators are MOC 3063 203Q. The motor is an AOSmith 42B93B72.
When lowering the chandelier, the motor runs for what feels like 60sec from ceilng to floor

Okay... What you have there isn't too challanging..... If only the local TV repair shop wasn't a thing of the past They would fix that for probably not much more than a box of beers.

The only real unknown here is the motor. Can I get a good closeup of the data label on it?
Motors and motor control electronics are the bread and butter of my day job.
There are quite a few different types of reversing a single phase AC motor all of them different
(guide - Reversing single phase induction motors )
With some more data on the motor I should be able to give you a concrete solution

Here is a picture of the ID plate on the motor. I really appreciate the help on this project of mine. Until I get this to work, the chandelier is chest high in the entry way.

With this failure, the controller ignored the limit switch. If the belt hadn't slipped, it would have really damaged the housing. As it was, it bent the steel plate that holds the screw drive about an inch, I will have to figure out how to staighten it before I put it back in service. IF I hadn't been at home when it happened, it could have been a mess.

So it says it is - as we would expect - capacitor run. It will not be a permanent magnet synchronous motor, they have poor starting torque and there is no need for synchronicity; it will be a "squirrel cage".

Thanks so much for confirming. I ordered a couple replacement BTA12's but since this seems to be an issue, is there a higher performing triacs I could use? I won't get back to this until Wednesday. in Chicago helping my son move