I'm short an output pin to control an outside circuit and I need a simple way to control two outputs from 1 pin.

The effect is that both A and B track my input but I always get A=high and B=low briefly between transitions. (I'm driving control pins on another processor between two stable states 11 and 00 with a guaranteed 10 in the middle which is a reset).

Have you also used up all the analog input pins, they too can be used as digital output pins? And the solution would be so much easier done in software commands in the sketch rather then having to add external logic components.

Because a 555 isn't really fast enough? Maybe a CMOS 555 is. This sounds like a job for a monostable, there will be one or two in the 74HCxx range I think. Alternatively using an RC delay circuit (RC followed by schmidt-trigger gate to combine with the non-delayed signal.

@lefty, yeah, nothing left, I'm even using the xtal pins. The avr just has a bit part in the circuit but its i/o pins are all spoken for.

@MarkT and tjb: I don't think it's a single 555 or monostable because I need one output to go high first when my input goes high and stay high longer when it goes low.

So far I'm looking at the following when the input on the left goes high, the lower right output (/clear) will be slower to go high because of charging its cap thru the 100k rx. when my input drops, the top output will stay high longer because it has to discharge its cap through a 1M vs the 100k. I think this would work but it's a lot of pieces. 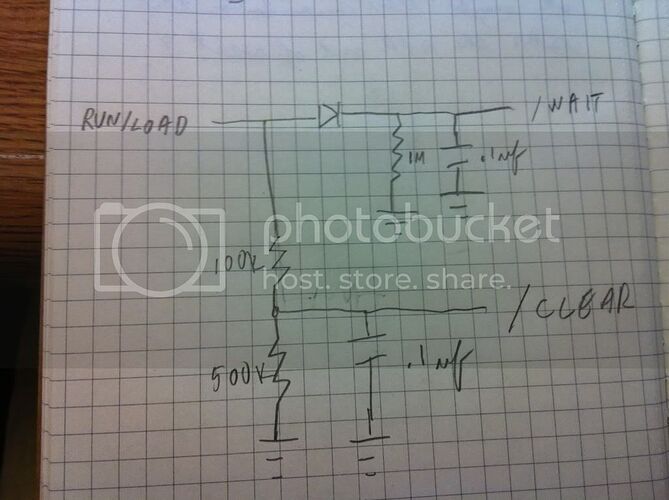 ok, way better idea. The single digital pin will drive both outputs either high or low but, if I tri-state the pin, resistors will pull the outputs to the reset state. much simpler and i can control the sequencing in software.

What are you using all the other pins for? It may be easier to reduce the number you are already using.