Hello,
I am trying to play with the one wire GM can on a 2008 Silverado instrument cluster (just the cluster not the whole truck). When the cluster is powered and nothing connected it sends out some can packets I can see them with my oscilloscope. As soon as I connector the can module it stops sending the packets. It will only do that if the module is powered. I have a cantact but it won't do 33.33kbs so I can't use it on the one wire but the Arduino will receive fine from the cantact at 500kbs I can't get the Arduino to send at either 500kbs to the cantact or at 33.3kbs to the cluster.

To the important stuff. I am using an UNO with a eBay MCP2515 CAN Bus Module Board TJA1050 using this library GitHub - coryjfowler/MCP_CAN_lib: MCP_CAN Library wired like the attached photo. The only thing I've changed in the example from the library is from 16mhz to 8 and to the appropriate can speed depending on what I'm trying to test with(cluster or cantact). The most important to me is why won't it send data I don't really care too much about receiving because I'm not trying to data log I just want send data to cluster to sweep gauges and stuff for testing them. I repair clusters as a hobby. 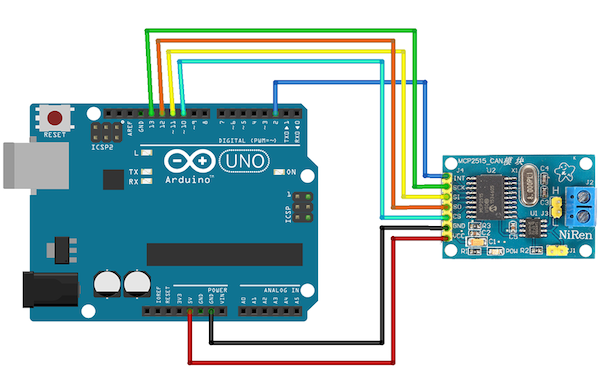 Ok it seems to have been a software issue not a hardware issue. I switched to GitHub - autowp/arduino-mcp2515: Arduino MCP2515 CAN interface library and its no longer killing the Canbus when it starts up. it also seems to be sending can now with the send function. anyone know any GM can and could give me something to send to the cluster to see if it will listen. like engine RPM or something?