Hey I have some DC Motors from two drills that were at the Good-Will. The specs on the drills are *14V DC 11Ah batteries and are geared with really good torque, plus a variable torque selector so you don't damage your motor. They can handle a continuous 12V 10Ah for 1 hour on my power supply, with minimal heat to motor and power supply. So my question is, will the 70L02P N- channel MOSFET work? And if so what type of H-bridge do i build?

I have 8 70L02P N- channel MOSFET's, 4 for each motor.
The labels in the H-bridge picture are wrong the image is just an example. 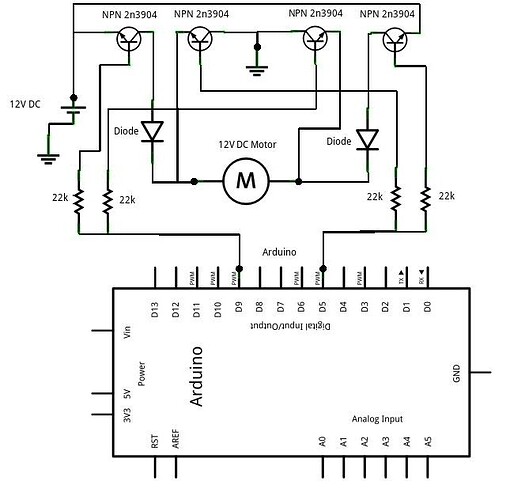 What's the current demand of one of those motors, not just spinning doing nothing, but under load (doing some work)?
I think that you should source an H-Bridge that's all done up.
Working out such a thing on your own, and with all N-channel FETs, is no mean feat.

There's a fundamental problem with your schematic using all N FETs. Standard N FETs need Vcc + 12v to turn on properly, and your Arduino can only supply 5 volts. All the FETs will quickly get hot and burn out, as they aren't fully turned on or off. Your schematic also appears to have no delay in sides of the H bridge turning on or off, so you'd get shoot-through blowing up your FETs in short order. You'd need to add a delay in the FET turn on time, but ensure they turn off as quickly as possible.

I expect the current on those motors is moderately high under load or when stalled, probably in the 10 amp range at least. As runaway_pancake says, you'd probably do better to buy a ready made H bridge, as designing for own is no easy feat, especially if you want to use PWM.

If you are however really sure you want to make your own, I have made several successful H bridges based on the HIP4081a, though the PCB design can be a bit daunting at first. The HIP4081a ensures you can't get shoot through, generates the Vcc + 12v that the FETs need, and provides a logic level interface to the H bridge.

Yes I have my hart set on making an H-Bridge. and I don't think I understand what your trying to say? Elijahg you said "Standard N FETs need Vcc + 12v to turn on properly"..... so to accomplish this I should have an Arduino friendly transistor to do the work of the on off of the fets. Since the picture I added is being used as a reference, you think you could ether edit or show me something to what I'm trying to accomplish with what I have? I have the 8 mosfets and 10 NPN 2N3904 transistors all types of caps and resistors, plus the motors. I mean, I have what I think to be all that Id need to get a cart up and running. yeah I have wheels, sprockets, chain,and wood. I have also built a tester board for the H-Bridge see picture. The power supply has two out puts, one 5V 2A and 12V 16A. 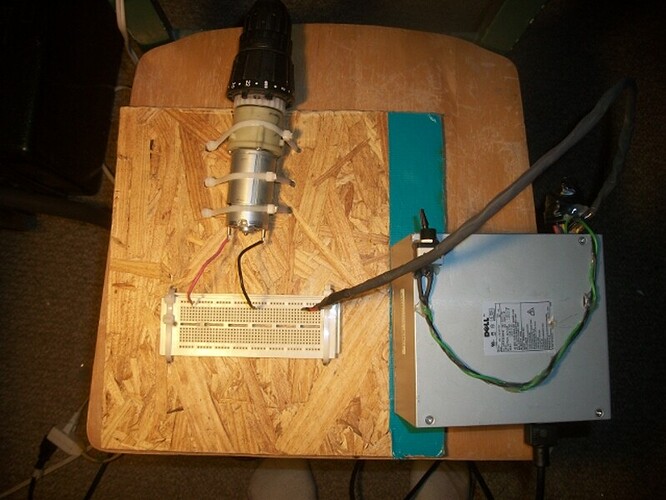 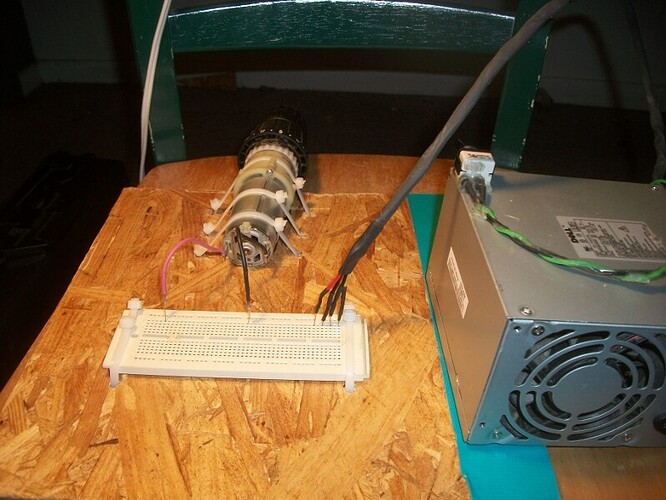 well good news every thing I have so far I have picked up for free the mosfets I got out of power supplies for computers, the wood was free scrap from lowes, the sprockets and chains were from free old bikes on CraigsList, and the only thing paid for was the motors from good-will but they were really cheap like 5 bucks for all four. Instead of discouragement maybe you could help I have built basic H-bridges before with the 2N3904 transistors to make small ESC's for a quad copter that I built from the ground up, with balsa wood and toy helicopter gears and motors. Look I'm going to build this! Its Going to Work!

Is it possible to make this H-Bridge out of the mosfets that I have? (70L02P N- channel MOSFET's)

jonny5:
well good news every thing I have so far I have picked up for free the mosfets I got out of power supplies for computers, the wood was free scrap from lowes, the sprockets and chains were from free old bikes on CraigsList, and the only thing paid for was the motors from good-will but they were really cheap like 5 bucks for all four. Instead of discouragement maybe you could help I have built basic H-bridges before with the 2N3904 transistors to make small ESC's for a quad copter that I built from the ground up, with balsa wood and toy helicopter gears and motors. Look I'm going to build this! Its Going to Work!

Is it possible to make this H-Bridge out of the mosfets that I have? (70L02P N- channel MOSFET's)

I don't know why you aren't paying attention to the advice others are posting...

If you want to make an all N-channel mosfet h-bridge, your high-side needs to switch at a higher voltage than the low side. Look into high-side mosfet gate drivers if you want to be able to do it the "simple" way.

Honestly, if you want to succeed at this project (instead of spending a lot of time and maybe money burning out mosfets), you will do good to purchase an h-bridge controller for the current needs of your motor(s). Homebrewing an h-bridge to control anything more than a few amps is not an easy task; yes, it can be done, but you'll probably end up spending more time and money burning up parts before you get a successful implementation, than if you had just purchased a pre-built h-bridge.

I asked what kind of current those motors draw under load and I didn't get an answer.
I gave you some solid info on gate voltage in an all N-channel h-bridge and got not so much as an ACK.
3V or so for the lowside gate, 14V for the motor, that's 17V or so for the highside gate (and the VGS maximum is 20V). Where will you get that?
How about reworking your schematic so that it shows what you actually propose instead of expecting others to imagine what's on your mind?
Rig up a half-bridge and get that going. What's the worst that could happen?

jonny5:
Is it possible to make this H-Bridge out of the mosfets that I have? (70L02P N- channel MOSFET's)

Not without additional ICs, no. You would at a minimum need P channel MOSFETs in addition to the N channel ones you have. Have a look at H-Bridge design 6.

But really, as others and I have said, it will be expensive and it will take a long time to design and make your own high current H bridge. I've done it, and it took months and many £££ spent on MOSFETs even when using a reference design + scope to see problems.

Thank you for the help I have looked up what all of you had said. With the motors that i have, they can easily be hooked up to the H-bridge thats current picture using FQP50N06 n-channel and FQP47P06 p-channel mosfets. i dont know how to test for current those motors draw under load. and i have no specs besides there brushed, when hooked up to my power supply under 5V 2A there hard to stop by hand and run at a good speed. same result when hooked up to the 12V 16A but at a faster RPM. 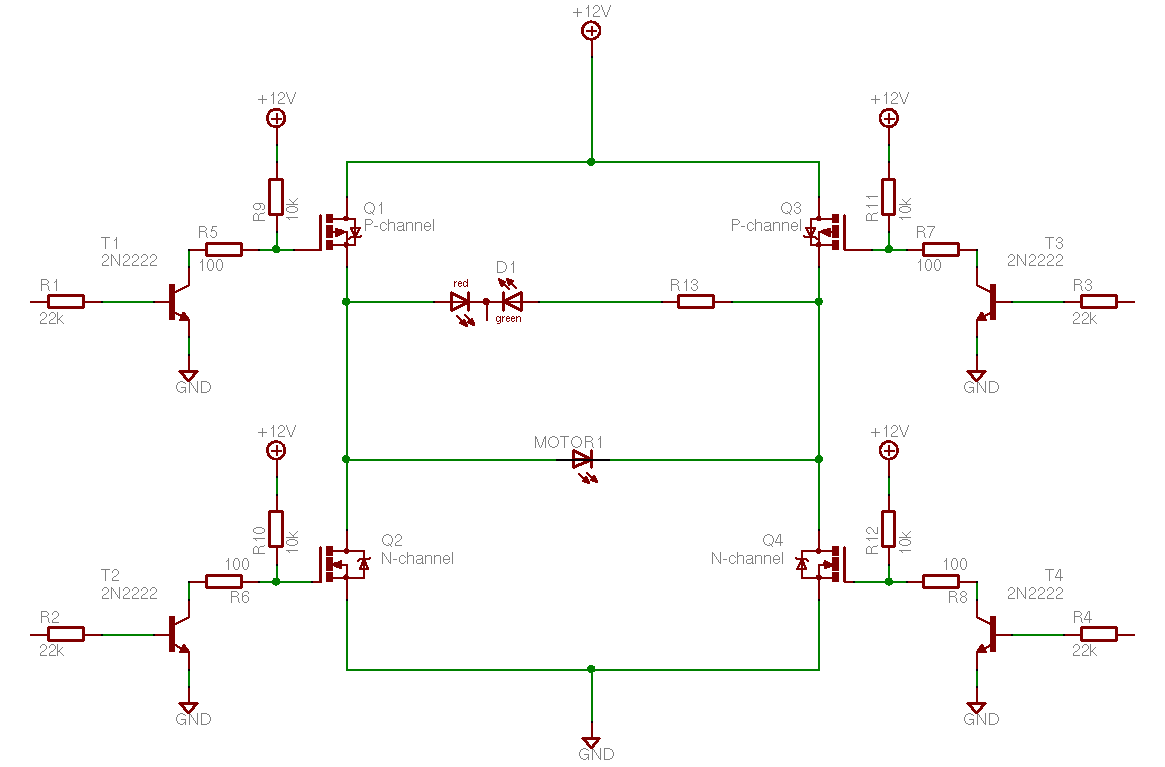 *** When you do your initial testing, you'd better have a fuse on the motor supply till you know you're on the right track. ***

I Have the 10K resistors in place to be a pull up resistors to keep the mosfets off to prevent a "shoot-through". As for default state protection i though that was for the code, and to have delays in code because it takes about 1/4 of a second to turn off and on. i have found after much research that having both NPN and PNP mosfets is the way to go in my H-Bridge.

On the NPN i should have a pull down resistor instead of a pull up?

You can make it work with the N-channels you have. The trick is to find a way to boost voltage of the gate input of the high-side N-channels. This requires either two supply rails (easy, if you are using a multi-voltage bench supply :-), or a voltage booster of some sort. You can build a booster circuit yourself out of a few transistors, two capacitors, and a clock source/timer. Or you can buy one, typically from manufacturers that also make voltage regulators. RECOM has one that goes from 12V to 24V for about 5 dollars from DigiKey. Then you have to figure out how to switch that on/off from an Arduino pin -- using a regular BJT transistor might be one way.

It all depends on what else you have available, and what your cost/time trade-off pain point is

It may be worthwhile to purchase a working h-bridge like below. To use the NPN MOSFETs I think a bootstrap setup like bottom is sometimes used.

To use the NPN MOSFET

Some previous discussions on attempting a DIY h-bridge design that might help you reflect on the issues.

For some reason, search isn't easily finding my previous post on this topic, so I created a new one. Here's my first crack at an H-Bridge schematic, taking inspiration from several locations: I would love to get some feedback and have a few...

MOSFETs, why the price difference?

Hello all, I'm putting together an HBridge to drive some automotive motors (5-10A), and am selecting MOSFETs for the bridge. It seems a classical pick is the IRF540/IRF9540 pairing. These have ~30A current handling and turn fully on in the 10V...

Getting and H Bridge Going...

OK, I'm putting together some thoughts on my first H Bridge. There will ultimately be 4 motors (and bridges), which I think are around 2A - I'm going to finally dig out the better meter and take the car apart tomorrow to verify... I've looked a few...

Hello all, I've seen quite a few references to problems using non-logic level MOSFETs like the IRF510 with the Arduino. I think I get it, but am trying to understand how the specs illustrate that. I think the Vgs (th) is the threshold voltage,... 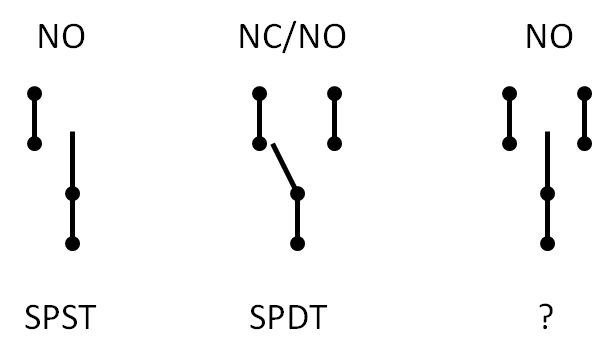 SPDT Relay with disconnected NO state?

Hey all, back with a basic relay question. I can see that an SPDT relay allows the ability to switch between two poles. I guess the assumption is that one of those poles is nominally closed, and the other is nominally open. Fine. However, I was...

Clearly this is a newbie question, but I'm a bit confused if one would need a motor controller or just some relays in an hbridge configuration (see previous post) to turn on and off some DC motors. These particular motors are already controlled by...

Hey folks, I'm working on a project to control some automotive motors with relays, but the one's I've been able to look at do not have markings telling how many amps to expect running through them to drive. I've done a little looking around at auto...