I've been trying to use an HC-SR04 sensor instead of a normal potentiometer to send midi CC but there is a problem that I just cannot figure out.
It is on the right MIDI channel and everything but I'm doing something wrong while mapping the distance, as it sends out the same random CCs. I uploaded a Screenshot from Hairless MIDI and the code I managed to come up with.
Could anyone please help me. I would very much appreciate it. 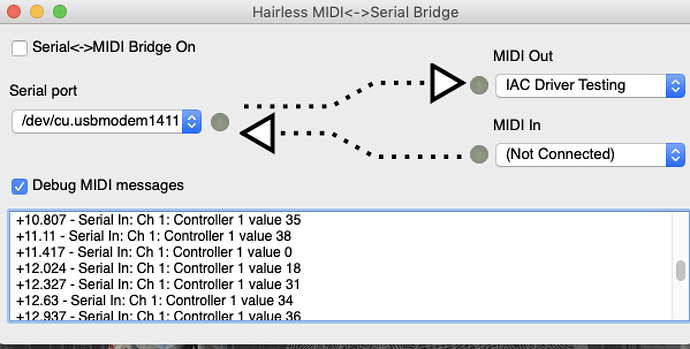 I doubt that distance is now magically an analog pin number...

Thanks for the help. I removed the analogRead function.

I can't figure out how to scale the max distance to the midi cc correctly.
Now it works from 0 to 35 in the HAIRLESS MIDI, but it just doesn't scale like a normal potentiometer would do.

this dated back when your analogRead() was returning a value between 0 and 1023 and you wanted to convert that into a value of 0 to 127.

Now you have a distance, which you checked to be between 2 and 400. So you need to do

Wow! It works now! Thanks a lot! Really appreciate it!
Thank you!

the code you posted is the wrong one

Hi @rgrontheradar
If you solved your difficulty, mark the post you solved with a "solved" tick.