Recently i had ordered a batch of 200 atmega8au tqfp32 from aliexpress.com
there is a strange problem with these chips installed on pcb i am not able to upload sketch.

I had to change the reset pullup resistor from 10k to 1k then i am able to upload the sketch. On my old boards with 10k resistors and different lot atmega8au no such problem exists.

After uploading sketch the board works as it is supposed to work.

In the past one of the lots from aliexpress had fake atmega8au these could not be programmed at all no mater what i did.

Is there any thing/code/utility exists that can help me to check these chips are working fine.
I do not care if they are fake as long as they work

I think you'll have to write something that tests all the functionality and IO of the chip, I don't know of any such test.
I start testing of a new board with installing bootloader, then blink, then expand blink to make sure all IO can drive outputs High & Low. I don't do much past that unless I am using some specific feature, then more hardware is usually needed, such as an I2C device (RTC module) or SPI device (MAX7219 with LEDs).

When I was a cooperative education student (Co-op program), I worked one summer at Teradyne writing test vectors for medium and large scale integrated chips (MSIC & LSIC) doing the same kind of testing. Making sure all internal functions and IO worked and responded per their datasheets. A simple example might making sure a mux chip selected inputs and the outputs showed up where expected, and only where expected, or a memory chip could be written and read to/from every location without messing up other locations. All kinds of parts that one could buy in the early 80's. Companies would buy Teradyne testers and perform incoming inspection and electrical test on all their parts to make sure they worked and were not counterfeit.

thanks for the suggestion.
I am testing all my boards after uploading the code and till now have no problem. Only problem is the resistor value change that took me 2 days to figure out. Is 1k resistor safe or shall i move to higher value like 3.3k or 4.7k
One of my usbasp dongle also died i suspect the low reset resistor. I am using 3.3v on my new usbasp just to be on safe side now

Not sure how well software reset from FTDI Basic/equivalent will work with 1K. The 1K/0.1uF cap creates a low pulse from DTR, 1K may make that too short. Might have to change to a larger cap.

And driving Reset directly with a Programmer to bootload could be an issue as you have seen.

delivery takes long from 30 to 60 days but shipping is free so i order and forget about it i do not have any other option the local suppliers and also all the online store are selling these chips for for 4 to 5 times the price available on aliexpress.
Also the supply/ availability and price fluctuation of atmel mcu is terrible.

I am betting on stm8 now they cost is arund 0.23$ each and pack as much punch as atmega8 only issue is the support community for it.

Do you have a TQFP socket so you can test them before installing on a board? I bought one recently. Haven't wired it up to a test/programming board yet tho.

yes i have that but testing 200 pcs is too much.

I just do random testing of around 20 pcs in a lot to check they are working.

This i have started doing as once i had got around 70 fake chips in a lot of 100 i was able to get refund but it caused lot of sleepless nights for me as i never suspected the chips to be fake so i spent nights debugging my circuit. Also had to do rework on all the boards on which i had already installed these fake chips.

I have made mine. 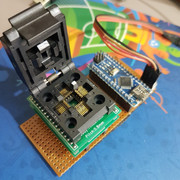