I am working on a project that would like to possibly use an Arduino system for. I am completey starting from scratch with the controller side of things though and would like a recommendation on how best to start. I would like to build a compliancy device for robot tooling that accounts for tool tilt angle, and force feedback. The force controlled with a pnuematic cylinder. I am thinking the force and tilt inputs would feed back to arduino??. Math would be done based on tool inertia and tilt then the controller would send analog out to servo-pneumatic valve to adjust air cyclinder pressure according to the inputs to close the loop and maintain a relatively constant force from the air cylinder. I have been looking at tutorials and seems like an IMU and the arduino with a force feed back sensor to start. How do i start with this?

The easiest board to start with is the Arduino Uno.

The Arduino UNO is the best board to get started with electronics and coding. If this is your first experience tinkering with the platform, the UNO is the most robust board you can start playing with…

A tilt sensor is an accelerometer.
An accelerometer with analog output is easy to use.
But If you know how to write software and know I2C, I would suggest an digital sensor.

If you want to know which sensor go well with the Arduino, check these sites:

SparkFun is an online retail store that sells the bits and pieces to make your electronics projects possible.

To measure the force, perhaps you could use a Load Cell ? 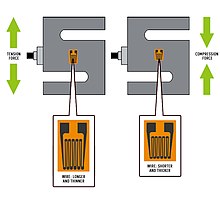 A load cell converts a force such as tension, compression, pressure, or torque into an electrical signal that can be measured and standardized. It is a force transducer. As the force applied to the load cell increases, the electrical signal changes proportionally. The most common types of load cell are pneumatic, hydraulic, and strain gauges. Strain gauge load cells are the kind most often found in industrial settings. It is ideal as it is highly accurate, versatile, and cost-effective. Structur...

I don't know how big the servo-pneumatic valve should be, so I can't tell what is needed for that.

OK thanks. I'll prob just order some of the parts and start playing with it to get familiar. The servo system would require a 0-10vdc (scaled up from the arduino) and probably run on its own 24VDc power supply.