edit::: fundamentally I am trying to build a “Double Buehler drive” , with the rotors arranged like those of a quadcopter.

I am considering a project that is basically a “quadcopter dean drive”. , the dean drive is an “impulse drive” concept that uses basically vibration rotors.

Using two rotors results in a bidirectional vibration machine, if the two rotors are synchronized and rotating opposite. , My suggestion is that using 4 rotors as in a quadcopter, the rotors would spin without any vibration at all. (stable smooth rototation).

For my project, I need to get the rotors spinning (all 4 MUST BE SYNCHRONIZED), then I would accelerate them according to the following pattern, first, I would accelerate one pair, then during the same rotation, but during the other half of it, I would accelerate the second pair, so that by the end of each rotation, they are once again synchronized. I would do this a small number of times, and then simply end the sketch. The point of the rotation that the acceleration occurs is when the weights of the pair are moving in one direction together, since the second pair is rotation opposite, the second half of the same rotation they too would be moving in the same direction and together, so acceleration of the rotors would occur only when all 4 weights are moving in one direction, hopefully resulting in some noticeable acceleration. Of course, the rotors are now stuck at the higher rpm, but I have more thoughts about that.

So, I need stepper motors that work fine at pretty reasonable rpms, with a fairly reasonable weight on them. I am considering those cheap elegoo ones, but if someone knows that I will wish I had good ones for consistency, I would like to ask for some relevant advice.

I made a picture with comments, and a video explaining it, if anyone is interested, in the links. HOwever, please understand I’m not organized or well thought out, and didn’t know what the dean drive was until AFTER I made these little works.

The elegoo stepper motors would give me everything I think I should need for like 20$ or so after shipping, but I don’t think my experiment will be satisfactory unless I can be sure that the rotors can all be synchronized. Also, I need to have a pretty good control over the speed, and to handle a fair bit of speed.

thanks!! any comments are awesome!!

Put some numbers to the speed required and maybe we can help.

Steppers are not made for speed. For higher speeds, higher voltages are needed.

well, not that fast. Not like a propeller. Maybe like an rc car wheel at the very most. Ideally I would be able to have a result that happens a low speeds so that you can see it happen, but realistically it may need to be a bit faster. I think, ideally it would be around 60 rpms at the top speed of the experiment, I suppose, but I don’t know how long the arduino needs to make sure they are all synchronized, and then the maximum speed of the motor is something I might imaginably try to achieve. 30 rpms (I will put a pretty hefty weight on them, I don’t know how heavy but maybe up to a skateboard wheel)

You write a bunch of gobbly goop about synchronize this and synchronize that, but you never ever give any thought to how that will be accomplished or even how you will know if that takes place. The reality is to synchronize any movements, one device must be master and all others must be manipulated to be in time with the master. You need to put effort into how to make that happen.
Paul

I mean that the motors have to spin at the same rates, and the positions have to be in opposites. So, for one pair, the rotors will spin in opposite directions at equal rates, and the weights will need to be inverse, when on is on the right, the other is on the left, but when they are on the top, they are both on top…

The idea is I will use stepper motors , or servos, or whatever it takes so that I can basically make each weight be at a point of rotation at a given time.

Right. I’d suggest to use some (cheap) stepper motors for a first experiment, write the code and find out how fast all that will work. Then apply a load and again find out how much it decreases the speed. This will give an estimate of the finally required motor torque.

BLDC motors are another choice instead of stepper motors.

I feel like those won’t let me maintain synchronized weight positions. (the weights will be like vibration motor weights) The motors can’t just spin at the same speeds, and stabilize like a drone, they need to really specifically be in correlating positions even at whatever rpms. (as though geared together)

you can’t set them at a degrees, the way you can a servo, but I am under the impression a stepper you can???

If in doubt try all types of motors to find out their fitness for your project. It’s your project and only you know about your needs and skills.

I guess I’ll try these. 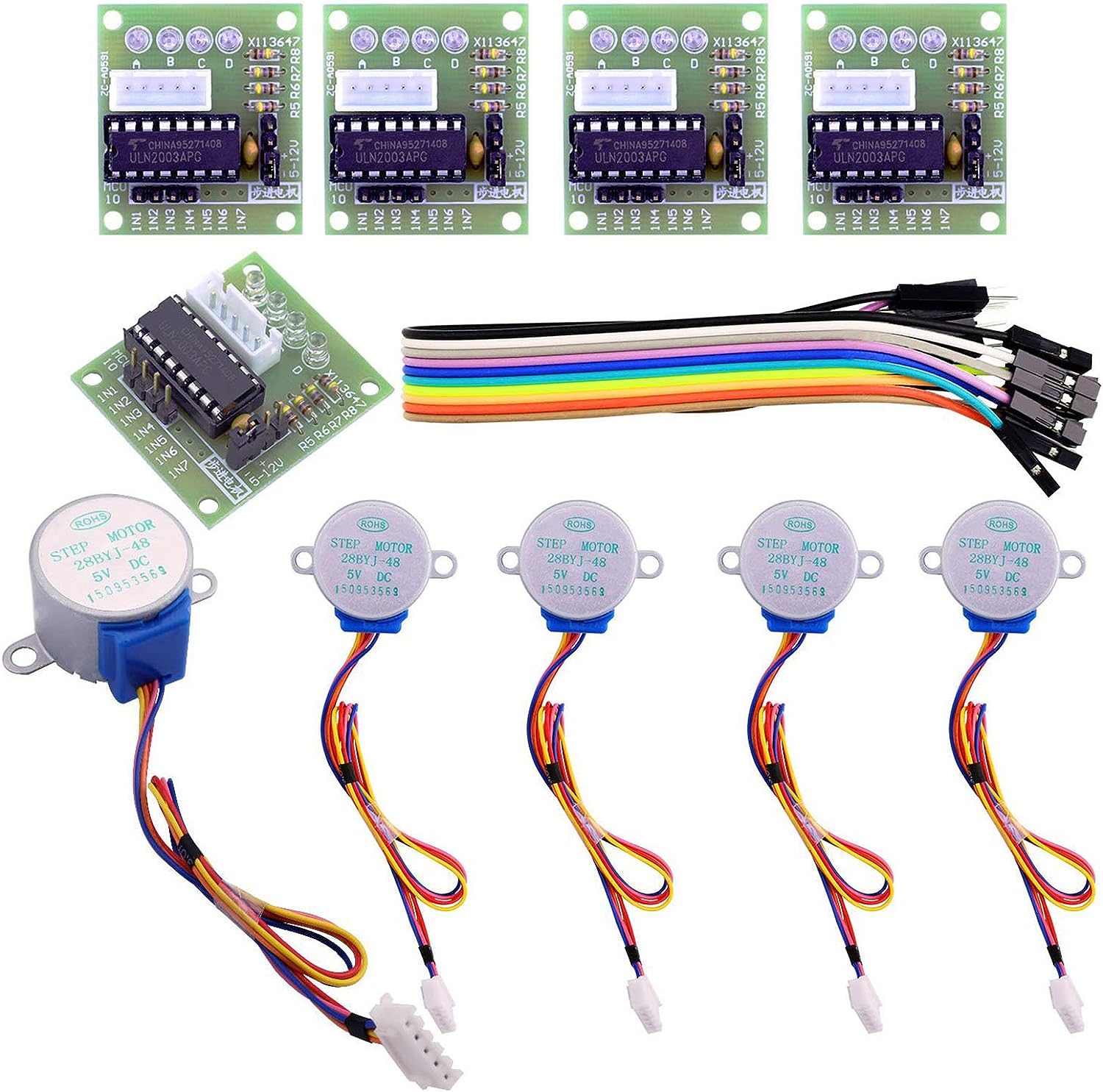 Also choose an Arduino (or more) with enough output pins, 4 for each of such unipolar stepper motors. And add the “home” sensors and pins required for synchronization.

so each motor will need 4 pins? hmm, that might be tough, I have an uno. I have a mix bag of stuff. I will need to investigate. I wasn’t going to buy anything but the steppers, because I should have everything, I have to investigate. thanks

These steppers are gear motors and definitely not usable for high speed projects.

I guess I’ll try these.

Good for testing but you will most certainly not be moving anywhere in a hurry.

Note that for operation at 5 V, you should purchase them without the obsolete ULN2003 driver and use a TPIC6B595 instead - each of these chips will control two steppers at once using only three control pins for many motors.

too late. I will wait until the order I placed arrives before making any more moves. Certainly I will have trouble, I haven’t played with an arduino in a long time, but at least most of this project should be pretty basic.

I don’t actually want them to move that fast. I want the rotation to be visible, so 60 rpm might do it. also, the total order, shipping and all, was like, maybe 25$, so if I can do it there, that would be super nice, and if I can’t , I’m going to try to run some song sketches… I sure like that stepper motor music.

It might be fun, but there’s a problem with the guy in the video’s understanding. He thinks that by having four rotors spinning in the way he describes, there would be no residual vibration (true), but there would still be a gyroscopic effect. False. Put two bicycle wheels on one axis. Spin them both in the same direction. Hold each end of the axle in your hands and try to turn the assembly - you will feel a strong gyroscopic force. Spin the wheels in opposite directions, and the gyroscopic effect disappears completely. It’s weird, subjectively, but it’s real. This is a standard demonstration for first year undergraduates on pretty much every engineering course, which makes me think this guy doesn’t have a mechanics or science background.

Despite talking about gyroscopes, the effect he is hoping will happen doesn’t rely on the gyroscopic effect, but rather on a way of working around Newton’s 3rd law.

Although I don’t believe it’s possible to get around the third law, I think it would be great fun to experiment. It won’t be trivial to get it to work with stepper motors, though. Best to start with everything moving pretty slowly or there’s a risk they’ll mis-step and get out of synch.

fundamentally I am trying to build a “Double Buehler drive”

Sorry, but the term “Double Buehler drive” finds no meaningful results on the search engine.

Can you cite some reference to this apparently unknown concept on the Internet? This would at least allow us to have some idea of what it is you are attempting to do.

For ‘high speed’ stepper control see my example code in my Multi-tasking in Arduino
which gives you to code tools to see just how fast you can make your steppers run and how to get more speed out of them.