I've been having a bit of trouble with a the power supply aspect for a project of mine. It utilizes 16x 3 watt RGB LED's and is currently powered by a 350 watt atx power supply. The unit puts out a reported 25 amps maximum on the 5v rail and each light unit consumes roughly 1.1 amps of power. However, the problem I am having is the unit will auto shutdown if I try to run the lights at the same time (54 watt drain to create white light!). It still does a great job at color mood lighting though.

in brief, I Want:

1) 12 volt sealed lead acid battery, connected to a voltage regulator and trickle charger. Hypothetically charge the battery when the lights are low, and the battery acts as a giant capacitor. Cons- Perhaps the battery tender would be damaged. Using something like http://www.murata-ps.com/data/power/lsn2-t22-d12.pdf

Other than those ideas, I'm pretty stumped. Any advice would be greatly appreciated! And to get you interested, here is a video of my project http://www.youtube.com/watch?v=bSqn1_EDx1c . Note the lack of white light ;D

I think most of my old computer power supplies give out about 35W at 5v so I would say just try a different PC power supply.

Try utilizing the 12V rail of the PSU. Then you don't have all the LEDs trying to pull power form a single rail. Use a 7805 to regulate the voltage down to 5V and you'll be fine. http://www.national.com/mpf/LM/LM78M05.html#Overview

each unit consumes 1.1 amps, so you would need a regulator for each unit and still be overdriving it like crazy

The 12v rail on PC power supplies only normally provide 17.5W max, I have not seen a power supply that provides more than that and as said, the regulators would be crazy.

, the regulators would be crazy.

The original problem had a 350W PSU shutting down when drawing 48W. It is this fact that is odd and needs addressing rather than just a random search for another supply.

Things to try, Load the PSU with a passive resistive load of 48W, use resistors or headlamp bulbs. Does it still shut down. If so it could be a faulty supply. If not then load up the PSU with your LEDs one at a time, how many can you power before it shuts down? You do not say what sort of circuit you have driving the LEDs it could be that you are drawing too much ripple current from the PSU, in which case you need extra reservoir capacitors on the PSU's output. It could be the LED drive electronics needs some supply decoupling, or if it has some already some extra decoupling. It could be you need to go to using chokes in the decoupling.

350 watt PC power supply, who's ratings are rarely even close to what they would like them, and where 350 watts = all the rails put together in a max situation

The 12v rail on PC power supplies only normally provide 17.5W max, I have not seen a power supply that provides more than that and as said, the regulators would be crazy.

I believe you are mistaking watts with amps here. On average a single 12V rail is rated to handle about 18A. Anything over 18A and the OCP kicks in and shuts the PSU down. So you can pull about 200W from a 12V rail at 12V. Plenty of power to work with. That is if the PSU in question actually provided 200W to the 12V rail. The specs on PC PSU labels can be very misleading. Like i said the amperage stated on the PSU per rail is the rated amperage before OCP kicks in. Not the actual amount of Amperage available to that rail.

I have tested several newer ATX PSU and have 18A to 20A on a single rail without any problems. Well the wires do get a little ware since i was pushing this a bit. The load used was a bank of wire round resistors. Here is the system i built. http://www.themodnation-forums.com/viewtopic.php?f=25&t=2703

There where allot of pics there but the image host i used seams to have shut down. Here is the final product though. 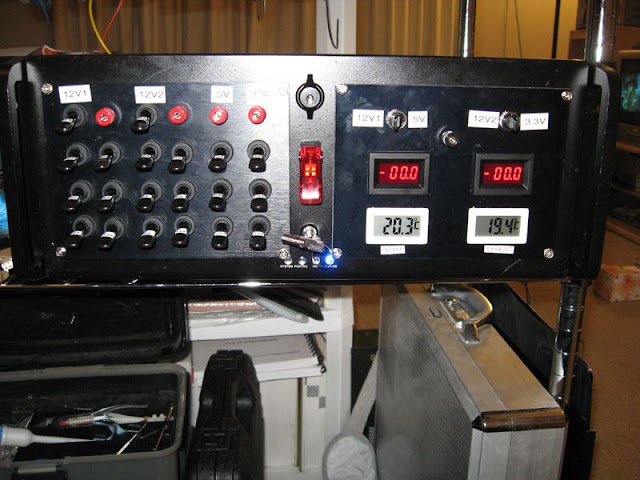 It seems no one jumped on the battery with a charger idea. Would it be possible to have some sort of battery act as a capacitor for the power supply? I haven't ever seen this in practice so I assume it's not the best of ideas. Another thought- one single 1/2 or 1 farad capacitor instead of battery.

I believe you are mistaking watts with amps here.

Oh sorry, I knew what I meant ;D
Yeah I meant to put A rather than W…

Checkout http://www.goldmine-elec.com They have a Vicor VI-LU0-EU FlatPAC on sale. 5V @ 40A for $40. These are low-profile 1MHz switchers with an integrated AC to DC frontend. You can also trim the output voltage with an external pot.

For an LED application I would trim the output to 4V (or your Vf max) and use a current-sink.

It seems no one jumped on the battery with a charger idea.

I have seen this done by radio hams when powering big amplifiers that take lots of current.

Still I wouldn't do it myself, taking large current while floating a battery charger is just asking for trouble in my book.

car audio nuts do it too, at my old job we would sell 2400 amp batteries just to supplement their amplifiers (80 lbs of juice in the size of a lunch box)

Thank you, jluciani! That power supply is just what the doctor needs to get around to ordering

The lights use between 4 and 25 feet of cable each (round trip). I used 24 gauge 3 line phone cord which provides 6 wires to work with. 3 for +5v from the PSU, one wire each for the colors. Each ground wire is also connected to a resistor on a transistor switched circuit.

According to AWG standards, 24 gauge wire is good for carrying .57 amps, or up to 3.5 amps in ‘chassis wiring.’ My quick calculations suggest there would be between .2 and .6 ohms of resistance total per wire. I do not have any capacitors in my circuit currently; where should I place them?