I have been around on this forum some while now but not really made any noise around here until now.

I have been working with automation of my home since 2008 and as we now built our house I decided to go all in with controlling it. Earlier I controlled everything wirelessly with the Tellstick but wireless is always wireless and as the devices I have used have no feedback signal you can´t really tell if the devices have the status you tell them to have, therefore I deciced to go with Arduino.

This is my first Arduino project, but I´m sure it is not the last one

For my house I need at least 35 inputs and 35 outputs which makes the I/O pins even on the Mega not to be enough and therefore I started looking for some way to extend the number of I/Os and ended up with designing and manufacturing a I/O expander card which uses the MCP23017 chip giving 8 inputs and 8 outputs per chip. On the current version (second version) of the IO expander board I have 2 chips but I might change this in some later version. The I/O expander board communicates with the Arduino through I2C and with current configuration I can chain 4 cards giving 64 inputs and 64 outputs. Every I/O expander board is connected to a 16 channel 10A 250V relay board. The garage has a similar setup but there I only use 1 I/O card and 1 relay card.

Schematic and how it looks installed you can see attached. I have a gallery for the I/O expander card too, this you can find here http://gallery.karpero.mine.nu/index.php?/category/170

This project will be extended with some sensor inputs like doors and other interesting stuff.

I plan to release the code for this too but feel that I need to get it more cleaned up before sharing with all you guys, if you have any questions please don´t hesitate to ask. 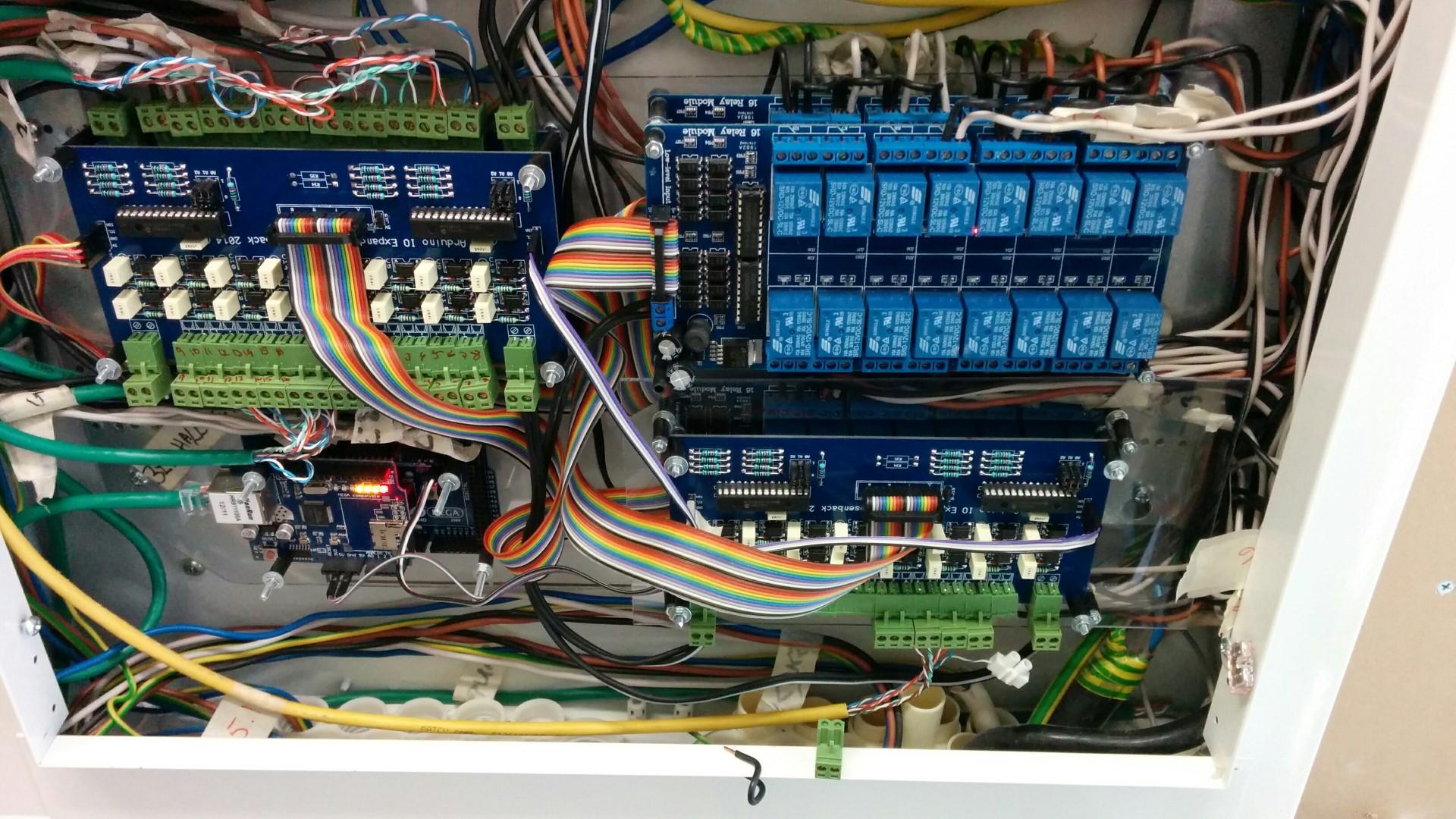 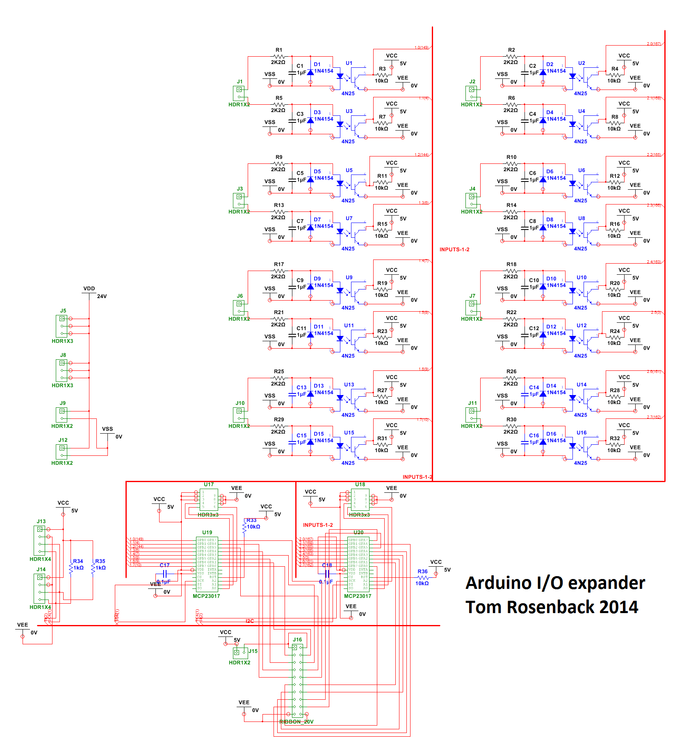 Nice !
I found this tutorial for anyone interested in learning how to use that I/O Expander chip. 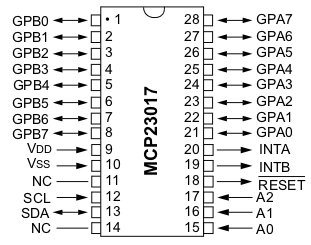 Learn how to control MCP23017 I/O expander with Arduino

raschemmel:
Nice !
I found this tutorial for anyone interested in learning how to use that I/O Expander chip.
Tutorial: Maximising your Arduino’s I/O ports with MCP23017 | tronixstuff.com

I have also used that guide as a guideline designing my board. At the moment I use I2C library instead of Wire library just to see if the communication would be more stable. Reason for this is that I have experienced some hickups during use of Wire library but I am not sure if it is my board or the library, and switching library is easier than designing a new board for test.

Hi gyz i am working on a Home automation project using Arduino MEGA 2560 and VRM-04 wfi shield(HLK-RM04) . So i m having a little trouble linking both devices. i have been connecting
Arduino pins VRM-04(DB9 pins)
RX2 TXD(3)
TX2 RXD(2)
GND GND(5)

From this connection serial monitor is showing "WIFI SHIELD NOT FOUND"
Can u gyzzz plzzz tell me a source code for arduino mega to control 8 relays and a temperature sensor.
I have been using this "DOMOTICHOME" app so help me gyzz.
plzz check that the code given below is correct for arduino mega and my project.

I don´t think this is the right topic to get the answer for that. I think you are better of in one the subsections of Using Arduino. Try searching and/or posting there. Here is one topic HiLink-HLK-RM04 modules review - Networking, Protocols, and Devices - Arduino Forum

I know it was posted a while ago now, but I am newly arrived on the scene, and you have obviously committed much time and effort into producing such a comprehensive project, so I am sure it's not something you've abondoned.

I've started doing an Arduino replacement for my now unsupported Homeseer plus Homevision system, and I was quite pleased with how it was going... until I saw your post! I hope you don't regret inviting questions pal, cos I have a few!

I can't blow up the circuit diagram sufficient to show much detail, so can you explain your 'Inputs' please... I assume the 1uF caps are to absorb spikes, but are the diodes just for negative V protection or are they zener 'crowbars', and most sensor outputs would have no-volts 'dry' relay contacts so how and where are you supplying signal power to the opto inputs?
Are inputs handled by interupt?
Can inputs be triggered by both On or Off states, ie: notify when a door is opened and also when it is closed?
Have inputs got some form of individual configurable non-retrigger timeout delays to prevent continuous repeat re-triggering, ie: when someone is stood under a PIR?
Can events be time or duration triggered, ie: turn a light On at a specified time, and turn it Off after a specified duration?
Have you included any other 'event' actions yet, such as voice announcements, IR remote control, or transmitting of event-triggered IR commands etc?
Are you loading/saving defaults from configuration file and saving event logs to file on the Arduino, and if so, what media storage is being used?
Is all the home-automation functionality autonomous to the Arduino, and therefore the use of computer web interface just an option?

I've got most of the things mentioned at least partially implemented (haven't tackled timer interupts or media storage yet) but it's all only crudely hacked together as proof-of-concept so far (this is my first Arduino project also) .... so how's your code-tidying come along, because I would love to be able to compare and perhaps combine functionality with you?

Hi, glad you like it! I have by no means abandoned this project, it has now been in use in my house for over a year, 1,5 years almost, still using it every day.

Maybe I missed some of your questions now, but don´t hesitate to ask again