How many of you trust auto-routing facilities in PCB CAD software?

Because I'm a relative noob I tend to just hit auto-route in Eagle and hope for the best ... but often I find myself in the situation where something that works on breadboard just falls over with an auto-routed board.

How could it get it wrong though? Surely it's just following one's schematic?

This was just recently discussed here:

What is wrong with eagle autorouter?

On the subject of the crystal, I always place it right up near the pins, I noticed that the dumilanove places it approximately 8 mm from the pins, so the question I now have would the crystal still function if it was placed at the end of the chip...

There are some things on a PCB that are critical and must be routed carefully (clock traces, decoupling capacitors for example) while others don't matter much and can be autorouted.

It's not a matter of trusting the autorouter not to be "correct", but....

I frequently use the autorouter as a starting point. Sometimes it's good enough. And if it fully routes the board, at least I know that it is possible!

I have found it best the other way round. Route what you thing is critical and then let the auto routing do the rest.

That too. Position parts and autoroute till it looks reasonable. Then rip up everything, manually route anything critical, and autoroute again to fill in the less critical pieces. Then clean up the ugly bits.

Careful, you can't "undo" an autoroute and get back to a partially routed board. Save the file before running autoroute, and you can revert if it's too unpleasant.

I prefer to hand route everything... but I find that laying out PCB's is relaxing.

but I find that laying out PCB's is relaxing.

I must say I agree, when I am laying out a PCB and get "in the zone" hours can pass without me noticing it.

I've had luck with Eagle doing an initial placement, seeing where autorouting failed, ripping up & moving parts, letting it route again. Saves a lot of time on fixing clearance issues and drill size errors and trace width problems.
Then go back and look for unreasonable traces and shorten them up.

Eagle seems to have the worst time at the end getting all the ground connections done. My recent designs, duemilanove size with more components added & bigger processors (1284), I've had to move signals around to expand ground plane areas and then add vias to connect them so all pins had access to ground where needed.

And one of them, the autorouter just couldn't do it, way too many unconnected signals, gave up & did it all by hand.

The thing that gets me is cleaning up clearance issues on the autorouted signals!

I enjoy the puzzle of tweaking signal placement to maximize ground polygon coverage (often leading to cleaning up clearance issues I created (: ).
Hardest part is managing to close the polyon in the corner I start it at. Am usually zoomed out enough to see all the corners of the board, makes the starting point hard to see. Just takes some practice I guess.

I always put my pour polygons well outside the board outlines, not exactly overlapping each other, and on a larger grid. It makes them much easier to draw and fiddle with... 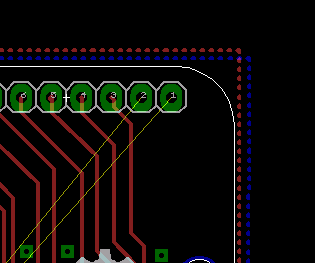 Thanks, that's a good tip.

westfw:
I always put my pour polygons well outside the board outlines, not exactly overlapping each other, and on a larger grid. It makes them much easier to draw and fiddle with...

Good tip! I had to click and pick them up every time I re-size my board. I'll do it your way starting next board.

Maybe the OP can share a design or two that worked on a breadboard but failed on a PCB so we can see what went wrong, the auto router or something else.