How to get rid of your users

Create a link to some part of your site (that's what the link says).
Have some other site get access to that user's account, and send unsolicited mails.

I recently tried all links in the menu bar.
Now i seem to have joined something called hackster.io and a "project hub".
I can't appreciate these things very much and i'm quite sure it's not in compliance with European law.
I'm not at all interested in "project hub" nor in hackster.io and don't need any association with either of them.

I have some sympathy for this. I seem to get emails from Arduino Create even though I never asked for them.

Hackster is a collaboration between Arduino.
Even your Arduino credentials can get you in there as they share the same SSO.

Project Hub is an Arduino offering sort of half way between Hackster and Arduino but all Arduino.
It is part of this site.

Have you checked your EMAIL settings ?
It can take a few days to unsubscribe so please don't expect immediate results.

Ps. IIRC parts of Arduino are hosted outside the EU so may not be subject to all the same laws.

Both areas have been in existence for quite some time too and I do know ARduino takes requirements quite seriously having included a specific privacy and security department a while ago.

You may also want to check out this page.
Has a couple of email address you can write to with concerns.

I use Hackster and just get a weekly email from them that's all.
You may also have to nip over there and unsub from thier list too (not 100% sure)

I realize I am a luddite and a crusty curmudgeon but I really wish every website was quite separate without sharing stuff.

I realize I am a luddite and a crusty curmudgeon but I really wish every website was quite separate without sharing stuff.

Well that was mY arduino giggle of the day

Well don't quote me on this Robin and as far as I know it was posted on the arduino blog but they are changing or have changed the sign in again.

So there may be some separation yet to take effect.
Last time they did it there were some minor glitches and I have not seen any yet so maybe the new one is not in place.

Thanks for responding ballscrewbob, but this is pure nonsense (i'm trying my best to be decent here, because then at least one side is).
I'm not shooting at you here (i know for a fact that you are at least decent, ballscrewbob), but at Arduino.cc and partners

If clicking a link at any site leads to some sort of subscription on another site without the link and / or its description telling anything about it, then those sites are misleading and tricking people in something they didn't ask for.
It doesn't matter whether you do that with the best of intents or the worst.

And to think that you will reach the entire world if you publish a blog, then get rid of those horse blinds and your tunnel vision.

I didn't want to subscribe anywhere and in fact i didn't do that at all.
So why would i have to unsubscribe now.

I trusted Arduino for 100 %
Now that's down to 20 % or less.
Who knows who gets my e-mail address and whatever data Arduino has on me.

Exactly this is the reason why i will create a new e-mail address for any site asking for one.
If some site leaks my address (which happens more often than you would like to think it would), i'll find it out because spam and other unsolicited mail will start to pour in on that address.
I'm smart enough not to publish my e-mail addresses.
I will not hesitate to dump and block that address for future use, and said site will be dumped right along with it.
Arduino is in no way an exception to this.

Don't forget that I don't actually WORK for arduino.
I get snippets of information and disseminate them as and where needed.

Almost 100% certain that there was some form of mention when downloading the IDE's and also in other areas about newsletters and the associated things.

Not fully defending Arduino here so take or leave what I say as you may.
You may even have unknowingly subscribed ? 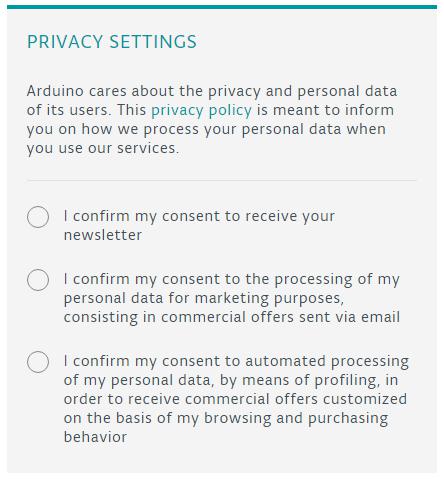 Many sites (not just Arduino) have the OPT out options where you have to actually go to unsub from services etc. Google and FB and all those take explicit permission unless you go into your settings and change them yourself. Not saying that is what Arduino do just giving an example.

Robin knows that if I see something that would not benefit users I will speak up and go so far as to back channel that information to relevant parties.

At the end of the day any concerns should ideally be addressed to the privacy / security officers for Arduino.

For additional easy reference I include this link. It covers some of the things you mention and is pretty much a boiler plate also found on so many other sites.

I know and there's no need for you to defend yourself.
I tried to tell you that my last post wasn't aimed at you, but at Arduino.

I am more than average aware of EULAs and opt out lists.
Opt out lists are a way to sneak yourself into some place no one wants you to go, but you want to go there anyway.
An opt in list should be used instead.
I'll never agree to receive newsletters, and certainly not to "process personal data" for whatever goals.
If that will lock me out of something, i won't go in at all.

None of the "radio buttons" you showed, are on in my profile.

There's nothing i did to subscribe to anything, only thing i did was clicking a link named community > project hub, which leads to a sub of arduino.cc and then to projecthub.
There's no way to know that this would activate anything and i never gave any consent to send me mails because i clicked whatever link.