how to intergrate centos 7 web server to web client arduino

Hi guys, i have a project to intergrate and control arduino from a web, the web has been created in centos 7 and connect to local network not internet access. i have finished the web in centos 7 but in arduino not yet. oh, the web server have been build from php and database.

can you help me to what must i do for the webserver and arduino, so i can control the arduino from the web server.

can you help me to what must i do for the webserver and arduino, so i can control the arduino from the web server.

If you want clients to make GET requests to the Arduino, the Arduino MUST be a server.
Forget EVERYTHING that you've done with centos 7; that was a waste of time.

Of course, getting PHP and MySQL running on the Arduino is going to be a challenge.

I suspect that you need to re-think what you are trying to do. At the least, you need to explain it to us.

Well, you have the option of controlling the Arduino, if the Web client running on the Arduino regularly makes GET/POST requests to the Centos Server to see if there are any commands waiting for it (turn on led etc.). The Arduino would then execute these commands and optionally use GET/POST to send a confirmatory message back to the server.
You would simply use a browser connected to the Centos Server to feed commands into the back end database, and have predefined PHP/HTML pages which the Arduino would call to see what it had to do.
If you want to do it this way, google Arduino Web Client.

i want to make like this scheme, if this possible?
but i don't know about what code program i must put in arduino to get "command" from php. 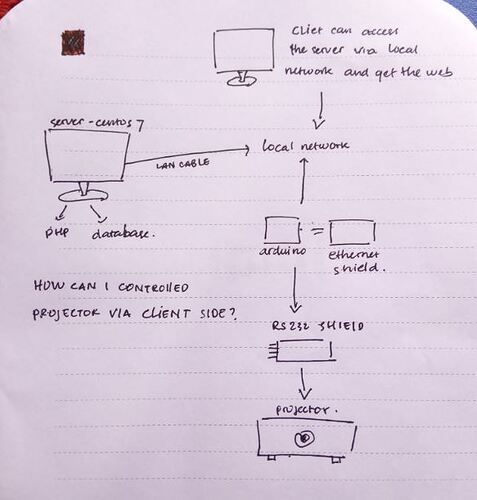 That could work.
Have you already tried some code to operate the projector from the Arduino via the RS232 shield ?

This is how it could work. For example, if you want to change the display resolution on the projector to 1024*768, you would open a web browser session to your Centos 7 server, open a menu etc. (all code which you have to write in HTML/PHP) and select the required resolution. This has the effect of putting the required resolution in the database in the form of a pending command for the Arduino to execute.

Your arduino constantly polls the server using a GET command which invokes a PHP script on the server which, in this case, returns a "pending display resolution change 1024*768" command. The Arduino then processes that command, sends the results to the projector through the RS232 interface, and that is it.

Maybe the Arduino sends back some sort of confirmation and the pending command is deleted.

For evey possible action on the projector to be carried out over this interface, you have to create your own command string which the Arduino can parse, interpret, and pass on to the projector.

Here is a very basic web client example. It is a bit out of date because google does not support plain http anymore, but you get the idea. It sends a request to the server and gets some results back, which you have to parse.