How to serial read blinking led?

Hi, I have a wireless charger & it has two LEDs- RED & BLUE.
I connected Arduino to it so I can check status on the serial monitor.

Now it's showing me when it's charging, charged, error or not charging. 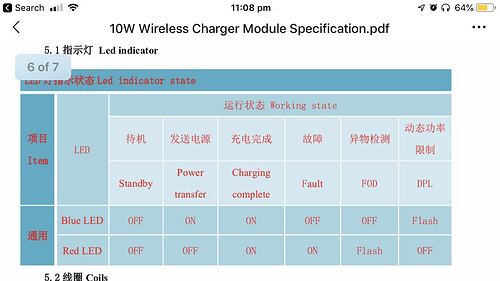 bujna94:
Now it's showing me when it's charging, charged, error or not charging.

Do you mean that you want the Arduino to use something like a photo-transistor to detect when the coloured LEDs are lighting and not-lighting and use that info to identify the state of the charger?

If not. what do you want the Arduino to do?

You need to know the current state of the pin and the previous state of the pin, and when the states change. If the state doesn't change, then the LED is steady on or steady off. If it does change regularly, then the LED is flashing. You'll need to determine what regularly means - once a second, twice a second, etc. If the state changes less often, then it isn't in a fault condition (or whatever the last two columns mean).