I have a panel spitting out bits, can someone help me with this?

First off I am new too this hacking stuff, programming, electronics in genral, and really consider my self to know nothing, am however always trying to learn, and try to ask questions as little as possible. OK on with the show.

I have a control panel that has a known series of functions. This panel plugs into a multi port reciever box. There are 4 wires 2 on power 2 on data. I am not sure if it is 2 way communication. I think it has to be.

there is rs-485 transciever in each unit.

I started looking at the data stream with my dso nano o-scope(brand new freaking out on me) and it is there with the hand unit plugged in or not, looked to be "patterned".

So I hooked it up to the open bench logic sniffer and started pulling samples. At 6 none 1 I got a no error uart analisys. But I'm not sure this means anything.
But with that in mind I took the signal wire and put it intu the rx port of the rs-232 adapter for my arduino bare bones. I got alot of gibberih.

So What software will I need to use on the computer end with windows so I can analize the com data better than hyper term?

I got High res shots of the board, but the main chip name is ground off.

So I know what the signals are supposed to look like. So I

I think my plan of attack this morning will be to frace out the board a little more and go from there. LOL I would laugh if my signal is just being sent with this rs-485 chip. I will try and post some screen shopt or pic or something if needed.

Is this the right place?

ok well the pics wont be online for a while so we'll see how that goes. never mind I found attachments

Hmmm... RS485 uses a differential signal on two wire for each direction. This might mean that it's only transmitting and it might mean it's using an RS485 driver but not for RS485. From the traces it looks like one pin is almost always the invert of the other which is normal and proper for a differential signal (one is high when the other is low). A closer look at those signals might help. The picture provided was too crowded.

johnwasser:
From the traces it looks like one pin is almost always the invert of the other

That "almost always" was bothering me, but I think it might be that the sender is tristating the driver in between bytes/packets. There's a fairly consistent pattern of both lines going high for a brief interval, then going back to being opposites for a while.

I agree with you that a more-detailed picture (at about 3-5 times the sample rate) might help. Ideally, it would be triggered by the two lines going high together, since that appears to be the beginning of the packet.

There's a Linux serial analyzer called scope that would work well for capturing the data, if it's really async bytes. It logs data and, optionally, handshake line changes and timestamps, to a plain text file. By generating a faked handshake line from an AND of the two data lines, you could get markers of the (presumed) packet starts in the log file. That should make it a lot easier to decipher the protocol.

Well I had a really crap day. I went to grab some signals fron tho bax, plugged in the open bus logic sniffer, and it would not register as a port, picked it up and what looks like one of the voltage regulatore were hot as hell.

I also have a bus pirate, but I have not been able to get that to work from day one. This is really the only time i have tried to use these tools.

I was able to use the scope to see what looks the extra bits on that shot.

I don't know what else to do at this point. My miny dso is also flakey, I have to squeeze it so that it will turn on properly. More than frustrating.

There's a definate pattern there, can you post (or link to) a larger version of the trace?

I will see if I can get each of the channels sepratley with the seedstudio nano dso, but it is really flaky. I have yet to get my bus pirate to work, I'v done all updates and such but alas no go. I was able to see with the scope one pair of the input side of the 485 chip going hi and low, and the other pair had the data. It is going to be a little rougher without an analizer. But I will also see if I can see what is getting sent from the control.
I'v got 2 mega arduino and 2 bbb, analize with one of those?

I'll get what I can

. I will see if I can do some snooping on the cable while it is powered with the panel on it. I did look into that scope software for linux. I honestly do not know what I am doing when it come to copiling from source and such. I'll have to keep looking for software for port work.

I have 2 usb serial ports. Could I tie my recieve line of each com line to the tx and rx. Run 2 intsances of some software stamping each side. This is assuming I find an actual rx tx seperate signals after tonight.

so far we got a few pics and a small vid. I will narate a little next time. 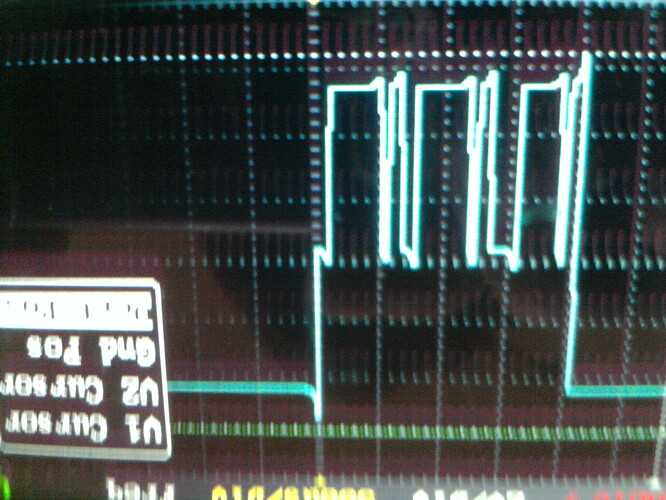 Sorry I can't make anything from that (and don't have bandwidth to look at videos).

The first pic was good (how did you get that?), I just couldn't see clearly because it was too small.

there is rs-485 transciever in each unit.

I would identify the 2 RS-485 signal wires and connect a 485 receiver. This should give a good 0-5v signal to look at. Having got that it might be possible to work out the protocol.

I have 2 usb serial ports. Could I tie my recieve line of each com line to the tx and rx.

these shots are all from before the 485 chip. Thats what I will try and use for my signals for the dual rx reciever. I will also post a picissa link for more pics.

these shots are all from before the 485 chip.

So they should be 5v presumably, yet the signal part seems to be about half the idle level.

I will double check on my polarity.

These are the other shots I was able to get. I am using the nano dso when it comes up and my phone for the pic.

other shots on web album