Hi,
I know there is such topic again and again but despite a lot of Googling I did not came to some conclusion so I ask for help. My setup is:
Battery powered transmitter outside - average consumption is < 10uA and I would like to keep this.
Something like 10-20 m distance with one wall and some bushes in line of sight.
Receiver with "unlimited" power inside.

Currently I am using the cheapest PCB antenna nRF modules for the communication (eBay fakes ofc). The range is "marginal" - for fixed RX location it is possible to find a location where the signal is good. But when RX is moved signal is lost. For improving the range I currently did:
I soldered 10uF ceramic caps directly to power pins of the module and I have a 1000uF electrolyte cap nearby.
While transmitting both RX and TX ATMega is in deep sleep with only timing crystal running to reduce switching noise. No other digital IC is present.
I have implemented a protocol which tries to find a frequency where communication is possible.

Other possible improvements I consider are:

EDIT:
There are pictures of my TX, maybe someone will see some stupid layout mistake reducing the range greatly. 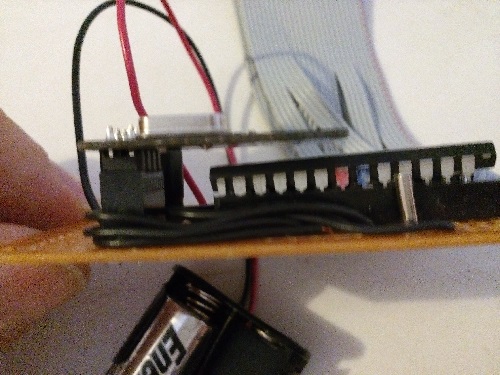 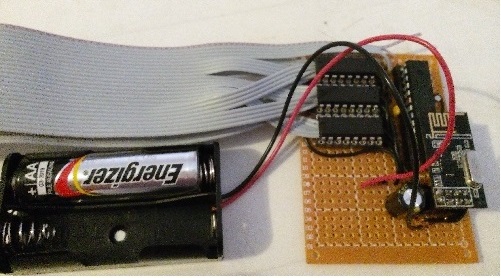 The way your antenna is mounted it is being shielded by the Atmega chip and the PCB. When I built a similar unit I mounted the nRF24 well clear of the PCB and at right angles to it. It is to the right of the red arrow in the photo (otherwise ignore the arrow 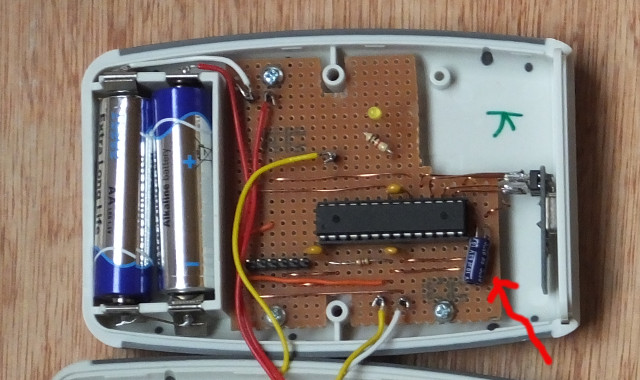 Smajdalf:
2) But other say it only introduces mismatch between antenna and nRF drivers possibly overloading and damaging the chip.

Indeed they do, and a better option is to get a high power NRF with the antenna supplied. They are twice the price but still cheap, and you only need one. I believe Stanley Sieow in KL gets about a kilometer.

Robin2:
The way your antenna is mounted it is being shielded by the Atmega chip and the PCB. When I built a similar unit I mounted the nRF24 well clear of the PCB and at right angles to it. It is to the right of the red arrow in the photo (otherwise ignore the arrow

As I said I know very little about RF. Do you think it is important and worth redesigning the board? I admit I tried to make the board small and SPI lines short and only when it was finished I realized the layout may be poor. I noticed you know a lot about nRFs - maybe you did some experiments how better layout improve range or I need to do it myself?
I think one advantage of nRF with external antenna would be fix of the layout problem.
BTW everyone says external antenna is better than the PCB one. Why? Is it more directional, does it consume (and radiate) more power or is it more effective radiating more power with the same power consumed?

Here is a link to a modification of the pcb antenna to replace it with a dipole antenna. I'm not sure if it fits with your layout, but the performance is claimed to be in between the standard module and the PA-LNA models. The project seems to be pretty well documented. 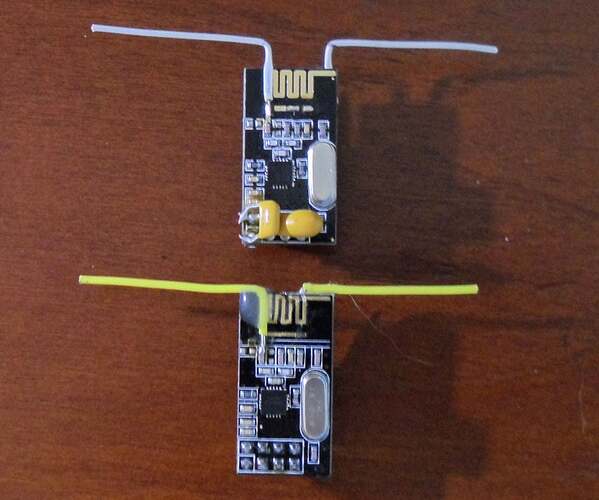 Enhanced NRF24L01 Radio With a DIY Dipole Antenna Modification.: The situation was that I was only able to transmit and receive through 2 or 3 walls with a distance of about 50 feet, using standard nRF24L01+ modules. This was insufficient for my...

If you can get the external connector on the standard module, its worth a try.

Smajdalf:
As I said I know very little about RF. Do you think it is important and worth redesigning the board?

Have you another nRF24 module that you could connect up on a breadboard to do some tests?

One of the high-power nRF24s would be better, if you have to buy something.

2.4GHz wireless and antennas are the next best thing to black-magic. I would not waste time trying to connect an external antenna to a module with a PCB antenna.