Just a quick question on best practices. I'm designing a simple hall effect sensor based circuit as shown below. 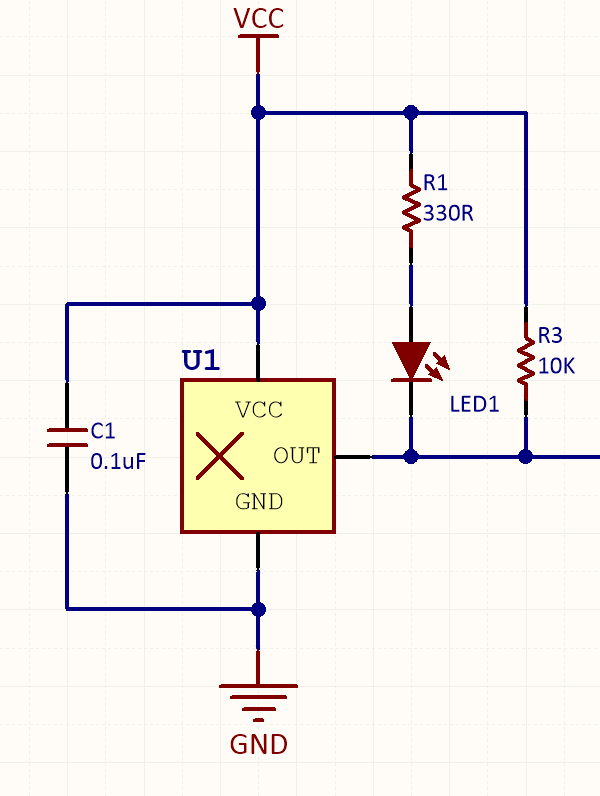 The output requires a pull-up resistor and I'm also adding a LED to indicate when the sensor is triggered.

The circuit got me thinking, is the 10K pull-up resistor redundant as the LED circuit is carrying out the same function?

It's more a just-wondering-keen-to-learn thing, obviously removing a single resistor from the BOM isn't a big issue but I'd be interested to know if there are any good reasons not to use the indicator circuit as the pull-up as well?

Yes, in that circuit the pullup resistor is redundant.

It is required if the output goes instead to a digital input with no pullup.

jremington:
It is required if the output goes instead to a digital input with no pullup.

I'm not sure I understand that last statement?

If the output is On/Off the 10K is optional.

If the output is analog, I recommend using the 10K as the LED is essentially open circuit until conduction occurs, but this could be argued otherwise.

If the sensor has an open collector or drain output, a connection from the output to Vcc via a resistor or other circuitry is absolutely required to determine the sensor state.

Which sensor do you have?