I'm an old flip phone user but I'm about to take the dive into the smartphone world. (Still don't think I need one, I'm beginning to give in to peer pressure!) Which is the better Arduino interface platform? iPhone, Android, or other? Why?

Thanks for your thoughts!

I have both an iPhone and an android based Nexus 7.

With both there are challenges:

The iPhone requires a Mac to program. I know some will scream that this isn't so because you can program through a Windows machine and port it but you will lose all of the support asosociated with the Objective C programming environment and I have read that it isn't stable. So trust me you will need a mac. I purchased a Mac Mini for this purpose. Then there is the problem of having to pay Apple for the priviledge of putting an app on your phone. This is where I have the biggest problem. This isn't just for the itunes store but even just to put a simple 'Hello World' app on your device you have to purchase a license. This is a major problem for me. Next you have the actual interface. There are cables you can buy that allow you to hard wire interface with an arduino and this is a good option. In order to use bluetooth, you have to purchase a bluetooth adapter chip through apple for the electronics side. You have to have this chip for every device you build.

The only real challenge with the Android system is learning a new language if you are unfamiliar with Java. From the time I installed the IDE to the time I had my first app on my Tablet was about an hour and that was mostly spent going over the code to understand what I was doing. You could put one of the sample apps on your device in about 2 minutes. You have full access to bluetooth without any special decoding chip. I don't know of a cable interface but I don't see the point when you can use bluetooth and keep it clean. I got a bluetooth module from Sparkfun for about $20 but have made no effort as of yet to use it.

Thanks, that is exactly the type of info I'm looking for. I don't own a Mac and I won't be getting one anytime soon, so I need something PC friendly. Also, it seems I've found more info that details the Android Bluetooth configuration. I wonder if anyone else has an opinion...

I've just looked at the RN-41/42 Bluetooth modules at Sparkfun, they seem fairly easy to work with. From what you have explained, I take it these will not work via the iPhone?

I've never coded with Java before, but I'd like to pick it up. So, do I write a program with Java to be used on the Android device then use that to talk via Bluetooth to my project? Whats the big picture of the process. I'm not currently working on a project, but I'd like to wrap my head around it.

I wasn't sure whether you meant to run custom software on your phone or just a generic app that handles communication. In terms of bluetooth, I've seen grumbles that on Apple you can't access the bluetooth device unless you pay $$$ to be an apple iphone developer. Since I don't own any Apple products, I can't say from personal knowledge.

On the Android side, there are various apps you can get from the Android store that can allow you to communicate to the device. Just this morning, I connected my Uno via the USB OTG cable to my Samsung S II phone. I used two apps:

Both allow you to monitor the text from Serial.println's in your Arduino, and can send text. You can even set it up so each time you plug in the Arduino, it runs the application. I found the Arduino USB Serial Monitor Lite application to be more polished, in that it starts in text mode, it recognizes linefeeds, and it has various options to control speed, etc. It also has a feature to email the contents of the screen to an email account. There are also various apps to control Arduinos via bluetooth, but since I don't have a bluetooth device on my Arduino yet, I have't tried them.

Wow. Sounds like Android is in the lead. I don't want to spend hundreds of dollars on a phone just because it can interface easily with my hobby, but what a bonus! I didn't know there were ready made aps for Arduino! Fantasitc! Thanks for the info.

As a side note, I just learned that iPhone5 can't use data and voice at the same time on the Verizon and Sprint networks...but Android phones can.

If there are any iPhone Arduino lovers out there, speak now or forever hold your peace

Which is the better Arduino interface platform? iPhone, Android, or other? Why?

Like other people said the iPhone development environment is available to Apple owners only, the android SDK runs on almost any OS and also offer many alternatives.

If you are not a java fun, ask google for Basic4Android. I don't like Java nor Visualbasic but b4A is a real RAD, easy to use, easy to learn and has a good library collection.

BTW, I didn't mention it, but when I tried out the serial programs on my Uno today, I was powering the Uno from the phone's battery. True it drains the phone battery faster, but it allows for you not to have a separate battery for the Arduino if you are going wired.

Then there is the problem of having to pay Apple for the priviledge of putting an app on your phone.

Is this a new policy? I signed up for a free Apple developer account after getting an iPhone 3G, and was able to upload directly to the phone.

I've never coded with Java before, but I'd like to pick it up. So, do I write a program with Java to be used on the Android device then use that to talk via Bluetooth to my project? Whats the big picture of the process. I'm not currently working on a project, but I'd like to wrap my head around it.

a simple (no code) way to build Android application, is AppInventor:
http://appinventor.mit.edu/
Here a simple app to turn on a led: 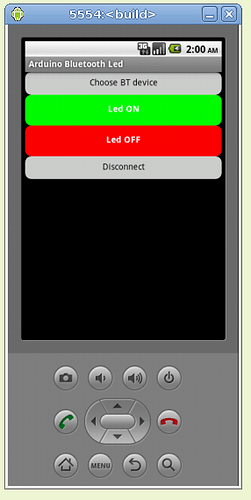 there's the Arduino code, and a link to a picasa web gallery with all the steps for AppInventor

You can use the RN-41/42 Bluetooth modules at Sparkfun, or the cheaper one (about 5 usd):