I’ve run into the same issues as the original poster in this thread (http://forum.arduino.cc/index.php?topic=139671.0).

Quite similarly, I followed: Gammon Forum : Electronics : Microprocessors : How to make an Arduino-compatible minimal board and got the boot-loader onto the 1284p without a hitch. The real trouble started when I tried to program the chip (no compilation errors so at least that checks out) and all I got in return was a sync_resp error.

Programmer: AVRISP
Board: “maniacbug” Mighty 1284p 16MHz using Optiboot (Jack Christensen’s v1.63 compatible variant)
The chip I have the is the Atmega1284P-PU1412 DIP.

Solutions I have attempted:

I’ve attached a picture of the circuit (it’s a bit scattered-looking but hopefully legible enough). Is there anything I’m doing that’s obviously off?

These are the fuse setting I used when burning the optiboot bootloader on a 1284P:

In my setup I have a JTAG interface so you may want to change that.

Check the resonator - the wiring to it looks a little off. But it could just be the picture angle.

Do you have Reset on the Arduino connected to Gnd so the 328 is not interfering?
Open File:Preferences and select Verbose outputs. Makes it a lot easier to get the timing down for a Reset press on the 1284. You can't use the Arduino Reset for this, need a separate Reset button.

I offer 1284P boards in a few configurations when you want to move on to something more stable.
http://www.crossroadsfencing.com/BobuinoRev17/
Example, a Duemilanove style board with FTDI module, can be onboard as shown (MIKROE-483), or offboard with FTDI Basic kind of module, I use one from www.tinyosshop.com.
(vs Uno style with Atmega16U2)

Thanks for the replies!

@ron_sutherland: I'll give that go and get back on how it goes as soon as I can.

@CrossRoads: The resonator's wired correctly (I just double-checked) so it is the picture's angle (whoops). As far as the Arduino Uno goes, I took the picture because I had it handy but I'm using an FTDI breakout board to upload sketches (well, at least trying to) so I'm fairly confident the 328p's not interfering.

I do also, indeed, have an external reset button set up (which I expertly managed to cut out of the picture). Using it seemed to make little difference to my plight.

I've been browsing through the forums and I've seen a couple of people claim that using a 12 MHz crystal helped them upload sketches or at least mitigate a lot of their problems? Is there any credence to this?

Odd, I've done similar, had a problem but full swing solved my problem.

I’ve only ever used 16 MHz crystals.
The closest I have to a breadboard is this wirewrap setup: 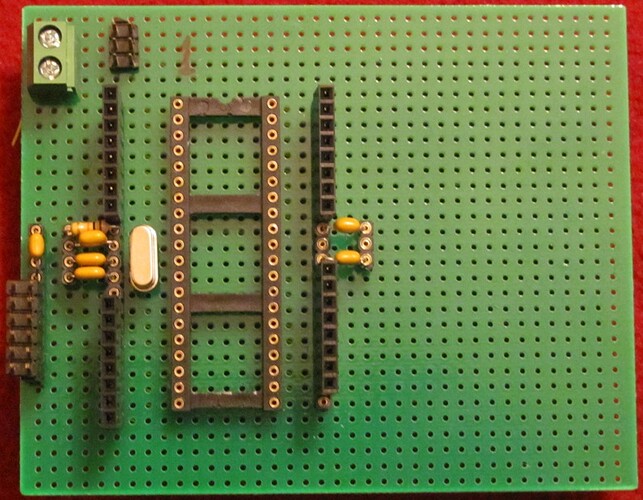 @Larry: quick question--did you use the same setup from the link I posted or was it somewhat different?

@CrossRoads: I think what I'll do is rebuild the circuit using your reference (thanks for those by the way!). I have this niggling feeling I might be missing something so it doesn't hurt to retry.

I'll be a bit busy until Monday, so I'll get back on how it goes as soon as I have something built.

I also wired up a 1284 on a breadboard.
I used a 16 MHz crystal with two 22pf capacitors.
Used 10K, 1N4148 diode and .1uf DTR cap on the rest pin.
I had decoupling caps on VCC pins.
I, however, used the Bobuino variant with FullSwing enabled.