I have some that are like strings with booted ends and others that are stiff solid insulated copper with bare ends bent at 90 degrees. 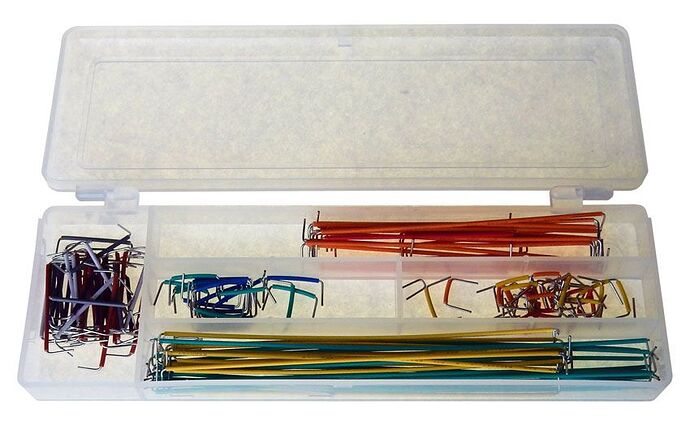 What I find is the 2nd type are harder to use but placed pretty much flat on the board are more dependable as well as a good way to avoid rat-nest wiring. But they suck going from breadboard to off-breadboard (like to the Arduino).

The 1st type are easier to slap something together but generally work or once made to work will stay working if not disturbed by more than a hard stare.

Anyhow I mostly ever see the string type and wonder how many people even know of the others?

I've been using jumpers like those in your first link (although from a different supplier). They're just OK. I've had a few issues with them breaking at the end, or worse, going intermittent with no outward sign. OTOH, I've put a few miles on them. I've just ordered some of these, which I think are a more robust version. That might not be the absolute best price out there, but I was ordering anyway. As for just plain wires, I typically get out the wire stripper and use what I have laying around, solid-core CAT-5 cable (24 AWG) or some old 4- and 6-conductor telephone station wire.

I have begun to lust after some Dupont cables....

the first type is a pretty new thing, the basic cheap ones seem to work better for me, I originally got the sparkfun premium wires and they were flat out garbage. Those were based on a molex style connector, but the pins were flat metal squashed in a U shape, bent easy, constantly popped out of the housing and just fell apart. The stupid cheap ones with a round wire poking out of a glued round housing like the ones you linked to seem to be doing much better for me.

The old staple type has been around for quite some time, before me I know that, what ends up happening to me though is I never have the exact length of wire to keep them flat, so I started making my own for a little. Then I just didnt care grabbing the 2+ inch jumpers and looping them. Thats still better than 6 inch loops though. 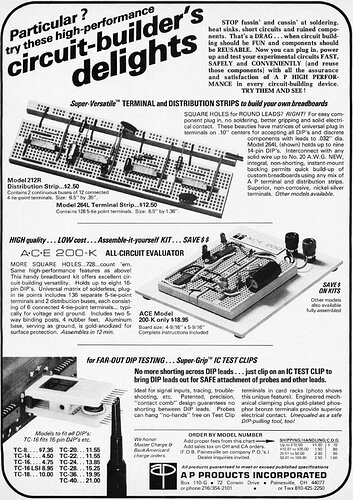 I've been using the premade cables from Pololu to make my own jumper cables: Pololu - Cables and Wire. I use them in finished products now too since the labor charge for me to solder up 100 of those is more than if I just buy premade ones.