I'm super pissed! I had a Nano on a breadboard and the +5 connected to one rail and ground to the other and I ACCIDENTALLY connected the ground lead of a HANTEK USB scope probe to the +5 rail and immediately the light went out on the Nano and I have absolutely NO USB access to it and the light does not come on when I plug it into USB. However when I power it from VIN, it powers just fine ... which I assume means I can still program it with USBASP, but that sucks because I can't interact with it over USB anymore ...

I apologize, but it's total bullcrap that this doesn't have better protection than what it has ... a simple accidental mistake like that should NOT fry an entire function of a micro controller. I love Arduino's don't get me wrong ... but this is just frustrating as hell ... their USB functionality seems to be their weakest point in terms of their hardware design.

I disagree with you blaming the Arduino's design for your mistake. Make such a mistake on other devices and see how many survive.

Since you're playing with Arduino's you should be able to find the fault on such a simple circuit and repair it.

If you don't know how to fault find, now is the perfect time to learn because you won't get many circuits simpler than the nano.

Yes, I agree. This is a good thing. Just flip that nano over on it's back and look at the diode under the USB connector that you may have fried. If it is a cheap Chinese knock off Nano that looks like this, here is the layout: 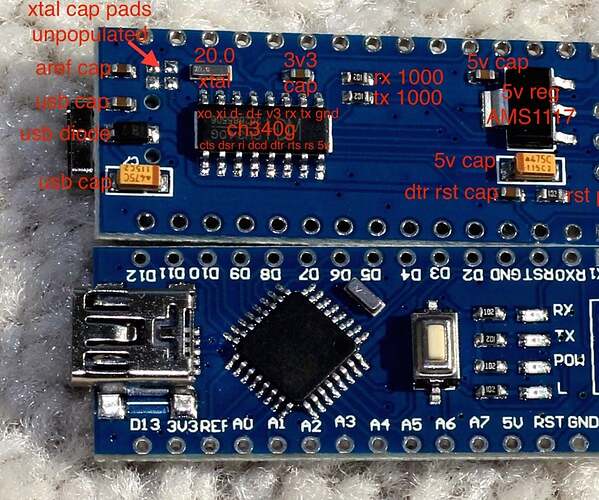 If it is a genuine Nano, the USB-to-serial chip is probably different and some of the other components may be in different places. You can just follow the traces and see where they go, and compare to the schematic to figure it out. Use an ohm meter to check components, unless there is an obvious smoking hole in a diode or something like that. Visual inspection, and electronic troubleshooting. Order any parts you need from Mouser or Aliexpress. If you don't fix it, put it in a bone yard bag or box like I do, then you'll have boards you can salvage parts from to fix other boards.

Finally, just because you can't program it from USB any more doesn't mean it is useless. You can use an external FTDI adapter, or an ISP programmer or another Arduino loaded with the Arduino as ISP script to program it. More stuff to learn about.