I'm playing around with the examples on the internet of using a toy laser pointer and photo resistor to make a trip wire. Everything works fine. My question or problem is that I want to have maybe 30 trip wires controlled by an Arduino, but each trip wire requires an analog input. All the Arduinos that I find don't have that many inputs.

Is there a way I can use a digital input for the trip wire. To give me a high 5v or low 0volts signal. I've used a pot in series with the photoresistor in stead of a 10k resistor. To see if I can adjust the threashold of the voltage drop to give a low or high digital signal.

I don't know if I'm doing something wrong or if its possible to use a digital input. I don't care if I use a analog or digital input, but most of the Arduinos have more digital inputs to use for my project.

I would think you would use a pot in series with the photo resistor instead of a set resistor, so I can calibrate the trip wire. Without adjusting the arduino sketch for different lighting conditions.

Would it be possible to use an analog card like the 4051 to get amount of analog inputs that I need?

Can't you use a photo transistor instead of a photo resistor? Than it will be a digital on/off signal instead. Than you can use any number of shift registers, or I2C multiplexers. Or I think there is an analogue I2C multiplexer but I can't remember the number off hand. Check the Playground I think it is mentioned there, it's like a PCF 9535 or something. 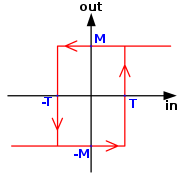 In electronics, a Schmitt trigger is a comparator circuit with hysteresis implemented by applying positive feedback to the noninverting input of a comparator or differential amplifier. It is an active circuit which converts an analog input signal to a digital output signal. The circuit is named a trigger because the output retains its value until the input changes sufficiently to trigger a change. In the non-inverting configuration, when the input is higher than a chosen threshold, the output is...

and second one is multiplexer.
With a multiplexing you can get unlimited quantity of sensors (photoresistors)
on 2 digital input of arduino.