Just got my new Arduino UNO, and are starting to refreshing my basic electronics knowledge.

I've made a few prototypes already: LED blinker, click button to step through 3 LEDS and fade between 3 leds.

Now i'm trying to figure out how capacitors works, and what to use them for when i (hopefully) start building bigger projects.

I'm trying to build a prototype where i have two buttons, one that charges the capacitors and one that releases it to a LED.

Clicking one button does light up the LED (to indicate the capacitors gets power), but clicking the other button doesn't do anything unless i press button 1 as well (Then the LED lights up and fades out - this behaviour i'm looking for but without pressing button1)

I made this circuit: https://www.circuitlab.com/circuit/rer73z/capacitor/

I think the problem is that once i release button 1 the power floods back to the green LED, am i'm wrong? Is it even possible to use capacitors this way?

Thanks lot for your help!

Ohh, I see.. Ofcourse the capacitors won't charge since they are not connected to ground.

Would i need to include some transistors so that when pressing button1 the connection to button2 is cut and instead a connection is made to ground? Please see my updated circuit https://www.circuitlab.com/circuit/rer73z/capacitor/ (Not sure if it was the correct components used for J1 and J2, but they should be "Activated when signal" and "Deactivate when signal")

What do you mean about the 1.7v vs. 3.3V and missing head room? I noticed that i'm missing a resistor for the red LED.

What resources for learning basic components with examples can you recommend?

I'm confused by the FETs in that circuit - are you really using one n-channel JFET and one p-channel JFET? JFETs can be depletion mode or enhancement mode IIRC?

Or did you use the symbol for a JFET by mistake and they are really MOSFETs?

I am not at all sure what that circuit is trying to acheave. Maybe if you explained what you expect it to do I could point you in the right direction.

A good place for seeing what components do is Wikipedia.

Sorry if my explanation was vague. As mentioned, i was not sure the symbols was correct.

I'm trying to step on step back, and instead of capacitors getting used to the transistor before making the above circuit (ButtonA = Charge batteries, ButtonB = Release charge to LED)

I tried drawing another circuit: https://www.circuitlab.com/circuit/j6h9sh/transistor/

This circuit is very untested, but made with inspiration from http://www.youtube.com/watch?v=gp1LK6nfzdQ I'll have to order some more components before i can tinker with this setup.

I'm trying to step on step back, and instead of capacitors getting used to the transistor before making the above circuit (ButtonA = Charge batteries, ButtonB = Release charge to LED)

Sorry I have absolutely no idea what that means.

The video seems to be nothing to do with what you are asking.

I would recommend Collin Cunningham's capacitor video series he made for Make Magazine: http://www.youtube.com/watch?v=ZYH9dGl4gUE Check out ALL THE COLLIN VIDEOS! Seriously, he is very knowledgeable on all things electronic. He has a lot of videos on simple electronic components like resistors, transistors, LEDs, and even project videos like 8x8 LED Matrices, Color Organs, and many Arduino projects.

The specific task you are trying to accomplish is more difficult than I initially thought. I spent about 15 minutes trying to figure it out by drawing up a schematic; no dice. However, once I tried putting together some components on a breadboard, it clicked. I then drew a schematic using everything I had on my breadboard. Here is it: https://www.circuitlab.com/circuit/3mt4q6/two-button-solution/ 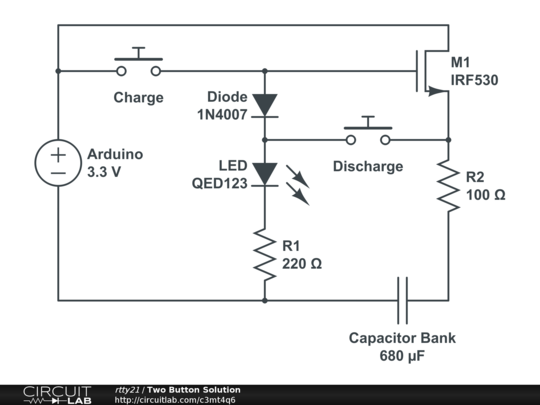 I like to avoid using the diodes and the MOSFETs when dealing with simple tasks such as this one, but I couldn't see how I would do it without them.