So I've got a 3x3x3 LED cube with a quirk that I just do not understand. My cube has 2 TLC5940s controlling the columns, and 3 PNP transistors controlling the rows and works fine until I start to run out of power. Since I was powering the cube from the 5v and GND pins on the arduino this was understandable, so I go to move things to my homemade bench top supply and for some reason my SMD Arduino TOASTED =(

I know there is something seriously wrong with my circuit that isn't becoming a problem until higher current is applied...but what? I've found I can disconnect the ground to the cube and it still works (gets a little dimmer) so that means the current is going somewhere else.

My guess is current is somehow flowing through the base into the pin on the arduino, but how and and why?

Excuse the mess, haha....I used what I had laying around. 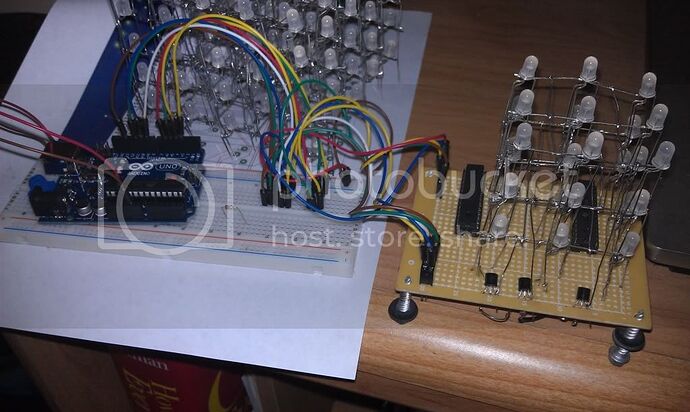 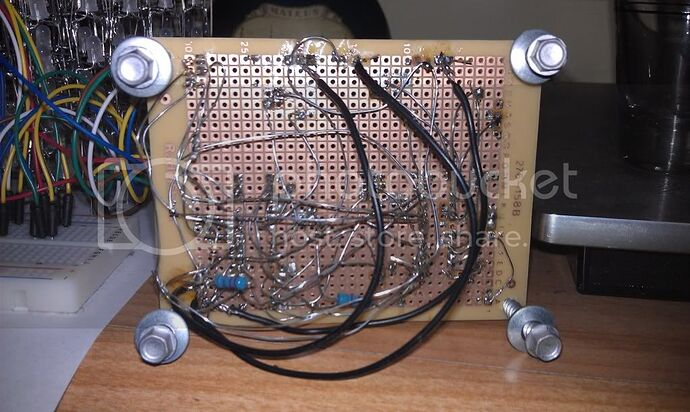 I should probably mention I'm using 2N3906 transistors, do I need a resistor on the base or something? It was my understanding that the TLC would limit the current anyways so I should be able to leave these wide open...

Also I forgot to mention this is an RGB LED cube, and I can light up the entire cube with single colors, but when I start turning multiple colors on to mix and get different colors besides red green or blue I run into power issues.

Since the pictures are probably more confusing than helpful, this is wired just like in the picture for the tlc library for 2 tlcs with just 3 transistors added. The transitors collectors attach to the same +5v as the tlcs are, then the emitters to the row they control. The base goes to a pin on the arduino I set to low to turn the row on. When I unplug the GND from the cube, it still works just slightly dimmer.

Yes, need resistor between arduino and transistor base.
Base will try and go to around 0.7V (basically 1 diode drop), so:
Resistor needed = (5V-0.7V)/20mA = 215 ohm
(adjust for the spec'ed Vbe-saturation of the transistor)

Can go to maybe 35mA, will be harder on the arduino long-term.

So I think what killed my chip was something entirely unrelated (and I think I know what it was). I carefully hooked everything up 1 pin at a time with my multimeter and found no shorts, but I ran into a new problem...

The draw of the LEDs on the cube should be about ~540ma (20ma per channel) worst case, which is all leds on in a single row. When I try to do this I only get red leds lighting up which means there isn't enough power. If I skip the transistor, the LEDs turn blindingly bright white, as they should....

So measuring the current between the base and pin on the arduino I get ~80ma, whoops

If I understand the spec sheet correctly, that's saturating the base yet this transistor is only capable of 100ma (or is it 200ma?) so that's all that's getting through? Sorry guess I'm pretty new to this stuff

CrossRoads I believe you are calculating for a single LED, am I correct?

No, I am calculating limiting the output current for an arduino pin driving the base of a transistor.
The current thru the transistor from collector to emitter will be limited by other factors once the transistor is driven into saturation.

I noticed you're not using a resistor on the TLC5940's?
You need to put one on the Iref pin of 2Kohm (if I remember correctly).
Also, You have 9 columns, why use 2 TLC5940 chips? You have 16 channels to play with so you only need one.

Can you post your schematic? I think you're not hooking up the chips correctly.