im new to this and i just bought 3 led strips ws2812b with 300 leds each, after received them two of them just lit 2 or 3 leds the third one works fine for a day, after that it turn on the fisrt 2 leds normal and the 5 and 6 dimmed.

im using 5v from a computer power supply (the same source i used when it was working), after looking on google i found out that i need a resistor and a capacitor to complete the connections.

im wondering if there is a problem on three strips or the power supply.

i have tried with differents power supply with no success.

any help will be preciated.

You need the resistor in part to help protect the strip for if the supply drops to lower than 5V and you are still pumping out a 5V signal to the chip. So it is possible the strips have been damaged, especially as you said it worked for a day.

Fortunately this damage will be confined to the first LED so one thing you could try after you fit the resistors is to remove the first LED in the strip. The capacitor will also help keep up the power supply voltage and prevent damage.

this is a picture from the 3 strips. 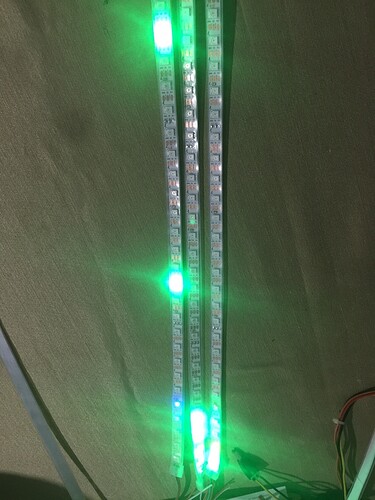 johndlcg:
this is a picture from the 3 strips.

I don’t see how this changes anything I have said.

was just to show you the condition of the strips.

im negociating with the one i bought the strips, i think i will return them thats why i cant do nothing what you told me.

i have a nother question:
as you can see in the image one of the strips lit the fisrt two leds one of them receive the signal from arduino and a control i bought, the next two leds are off and then the next two are dimmed.

in ther other strip the fisrt two are off and led 3 and 4 lit up.
the third strip as you can see in the picture.

can all of then be fixed? if they can be fix i could get a partial refund.

can all of then be fixed?

Sorry I can’t tell from a photograph. You would need to look at the signals along the length with an oscilloscope.

just like you said, it was confined to the first led on the strip, i had to cut more than once, cause they had many damaged leds, but i got them working.

Thank you very much for your help

But the question is - why?

If it is not useful to increase the voltage, look at the LED strips for other components, it is likely that there is a component with virtual welding.