I want to illuminate my staircase with a LED strip so when I put the leg on the first step , the strip start to glow continuously till the end and when i reach the end of the stairs , the LED strip start ( from beginning) to goes off.
I know it is a little bit ambitious because I never work with an Arduino, but does anyone know if these is possible ?

Can you give a link to the strips you want to use?

How wide will the strip on each step be and how much current will each need?

Did you have a method for detecting when you step on the first & last steps? PIR perhaps?

Do you want the strips to fade on and off or just switch on and off?

You will probably need a type of transistor known as a logic-level power fet to control the current to each step's strip.

Hi!
If the staircase is between two walls, I suggest you motion sensor(s). And also I suggest you some "Arduino friendly" relays, to turn on and off the LED strip.
Hope I helped u vitothelegend

Hi! Here is link on topic just like this one: Led Automatic Stairs Lighting - LEDs and Multiplexing - Arduino Forum

Here is a link with the photo of the stairs : http://tinypic.com/r/jjblo3/8

I think is simpler ( for programming and also for woodworking ) to insert the LED strip into the handle bar of the stairs, witch is about 8 meters long. If the strip work at 12V and one meter need 12 W , in total I need a 100W power supply.

I think it would be interesting , as I said , if the LED strip ( only from right side of the picture , or the handle bar near the wall) start to glow from the beginning till the end, something like each LED start to glow one by one and stay on for some seconds or minutes.

Can I obtain a continuously glow with a normal strip light ? or it is simpler to just add some switches to the stairs and maybe a little fade on and fade off .

I forgot to mention, the LED strip will be mounted under the handle bar, something like here http://st.houzz.com/simgs/2151618c0d6c2fef_4-4621/contemporary-staircase.jpg

Generally, 12V strips can be cut after every 3rd led. This could be done but would mean implementing individual control of a large number of sections, maybe 60 to 100. So I would aim for around 12 to 15 sections of around 15 to 20 leds each. This would mean you would have enough Arduino outputs to control each section, plus a few for pir sensor inputs (although it may be possible to connect multiple pir sensors to a couple of Arduino inputs, as long as you do not need to know exactly which sensor has been triggered). Each Arduino output could control a transistor which in turn controls the 12V power to a section of strip. You could fade eqch section up or down, even though they are not all pwm capable, under software control, given that only one section would be fading at any instant.

Do you think it is a good start to learn the programming language by buying the Arduino Nano ?

I prefer Nano over Uno because I like to prototype on breadboards, and Nano is more convenient for this and enables neat wiring which improves the chance of finding any wiring errors. I have attached an example.

In terms of programming, Nano is identical to Uno. They both have the same mcu chip. They have different usb to serial converter chips, which I have read can cause driver problems with some operating systems. Having realy only used Nano but never Uno and only on Ubuntu, I can't claim to be an expert on those problems. 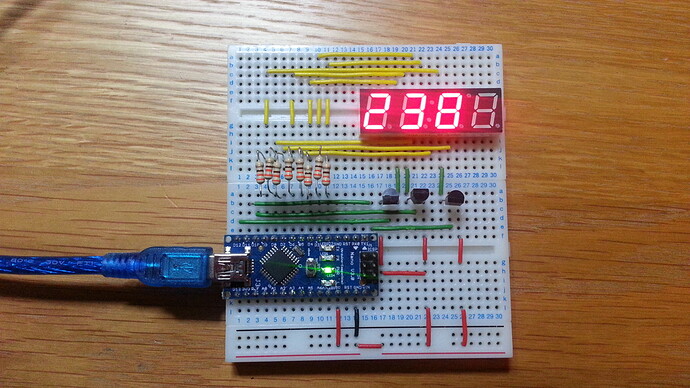