I think I've finally sorted and perfected a code for reading a simple LDR and calculating a lux value.

Here's the basic circuit: (sorry about the simpleness)

All self explanatory, the v and (A5) below it is the connection between 10k and LDR to analogue pin 5 on the arduino.

The code is tuned to the circuit you're using, to be as precise as possible, so where it says 10.72 that is the 10k resistor in kOhms that I checked using a mulitmeter. Likewise I double checked the 5v, which was exactly 5v on my voltmeter. The very small long number (0.00488...) is 5/1023, again use the true voltage to get accurate results.

I have a very cheap lux meter and I've worked out the percentage difference between my arduino light meter and it as an average of 5.56% over 7 different lights (from dark to sunlight) so I pretty certain that, that's as close as I'm going to get to a true lux reading using a tiny LDR and my arduino.

Hope that helps someone

That's a lot of decimal characters, and the arduino floats don't support near that many. From the arduino reference of floats:

Floats have only 6-7 decimal digits of precision. That means the total number of digits, not the number to the right of the decimal point. Unlike other platforms, where you can get more precision by using a double (e.g. up to 15 digits), on the Arduino, double is the same size as float.

Is there anything I can use? "int" wont work, will it?

Is there anything I can use? "int" wont work, will it?

There are ways of using long variable types and scaling the equation, but you best let the software gurus look at it and see if it would give you an improvement over using floats. I think your basic limitation is the 10 bits of precision from the analog D/A conversion.

I just tried 9 digits instead of however many and made no difference!

Hi everyone ! i got a problem with tihs part of the code, i don't get a correct value in return. I'm using the brand new Tinkerkit LDR sensor wich doesn't have any information about the serial resistor. So i'm a little confused with this formula.

Could anyone help me or redirect me to more inforamtion about this product ? (Ref. http://store.arduino.cc/ww/index.php?main_page=index&cPath=16_19 )

Chalky:
I just tried 9 digits instead of however many and made no difference!

3 digits of accuracy is more than you need given the granularity of the ADC, the temperature dependence of the sensor and most especially the fact the sensor's spectral response is WAY OFF the standard response needed to accurately measure light intensity! 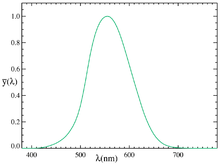 Luminous efficacy is a measure of how well a light source produces visible light. It is the ratio of luminous flux to power, measured in lumens per watt in the International System of Units (SI). Depending on context, the power can be either the radiant flux of the source's output, or it can be the total power (electric power, chemical energy, or others) consumed by the source. Which sense of the term is intended must usually be inferred from the context, and is sometimes unclear. The fo Not all ...

Unless your sensor's spectral reponse matches the standard curve you'll be lucky to have 1 digit of accuracy, hence the 5% error doesn't surprise me, but using more than 3 digits of precision in the code does(!)