Hello,
I have a bit of a problem... For some reason LM2931AZ50R LDO voltage regulator does not regulate to 5V as it is supposed to... I'm using 12V for Vin (with approx 20mA load between Vout & GND)

Everything is connected according to the datasheet guidelines (link: http://www.st.com/internet/com/TECHNICAL_RESOURCES/TECHNICAL_LITERATURE/DATASHEET/CD00001885.pdf)

I though it might be a bad regulator, so I tried another one. And the same thing. Does not work.

Gee...there's not much that can go wrong here. The only thing I can think of is you have it backwards. Did you notice the pin diagram on page 4 of the datasheet is a bottom view of the part (not looking at the part from the top)?

You're absolutely certain about your pin-out (Fig. 2), using the circuit in Fig. 3?

runaway_pancake: yes, I'm using the circuit from Fig.3 with capacitors as specified.
RuggedCircuits, runaway_pancake: The pinout shout be correct. (the regulator is in TO92 package), if I look at it with the leads pointing towards me and flat part to the top the pinout should be as in the Fig.2 (left pin: Vout, Gnd, right pin: Vin)? Isn't this correct?

Sounds right...I'm stumped. Could you have 2 bad parts??? Are you sure it's the right part (look at the markings....)

Tell us more about the load, where the input voltage is coming from, etc. Can you post a picture?

--
The Aussie Shield: breakout all 28 pins to quick-connect terminals

How expendable are the parts? Maybe try reversing one to see if it is a wiring issue. (Doesn't sound like it, but not much else to consider.)

Yes we need to see a photograph.

Thanks for replies, I'll post the picture tomorrow when I get home. I have more of them, so I'll do some testing with a third

I'm using 12 V just for testing. The device is going to be powered from some lipo batteries and I need it to work to close to 6V... Could not do it with simple voltage regulators...

Ok, this is the image of how I have it connected... 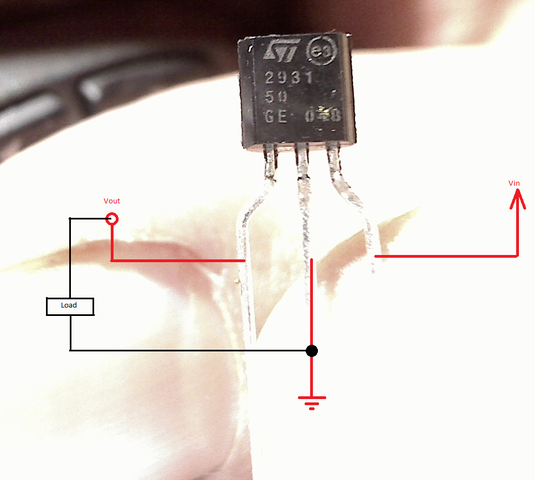 Tried with the third one. The same thing. I even picked up a lipo battery and tried it from it (7.5V). The same thing.. 6.3V out. Strange things are happening... I do not get it. I thought maybe my multimeter is wrong, but it isn't. Tested with two of them (MT-1820 and DVM1400) and the readings are the same.

P.S. There are 100n capacitors going from vout to GND and Vin to GND. Forgot to add them to the picture.

SadiaV:
P.S. There are 100n capacitors going from vout to GND and Vin to GND. Forgot to add them to the picture.

What is the load?

What is the load?

I've noticed that, but I hoped it had no serious influence. Isn't the purpose of the capacitors just to clean up the output?

The load for now is an LED and 470ohm resistor, so the current should be approx 4mA.

But, as mentioned before, even with no load it does not regulate properly...

Wow, lo and behold... I changed the output cap to 2.2 uF electrolytic (had some of those laying around) and guess what... 5.05V. Thanks for help guys!

EDIT. connected the output to the scope. 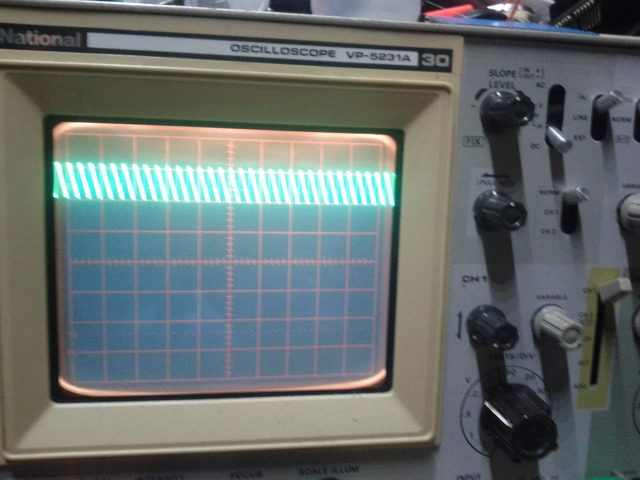 SadiaV:
I've noticed that, but I hoped it had no serious influence. Isn't the purpose of the capacitors just to clean up the output?

Your definition of "clean-up" may very well differ from the person who designed the regulator. As mike suggested, LDOs are FAR more sensitive to oscillations. A LDO isn't as forgiving on a demanding output-load.

You can't fault a design if you don't follow the recommended guide.