Hi,
I’m trying to build a standalone sensor reader, that logging data for each minute.
The sensor takes much more amps that arduino can supply (over 30 Ma for sure).
Relay takes a lot of power, so I think of another idea.
connect the sensor Vcc directly, and the sensor ground, to one of the gpio.
(schema attached).

Is that idea can damage my arduino?
Any other solutions? 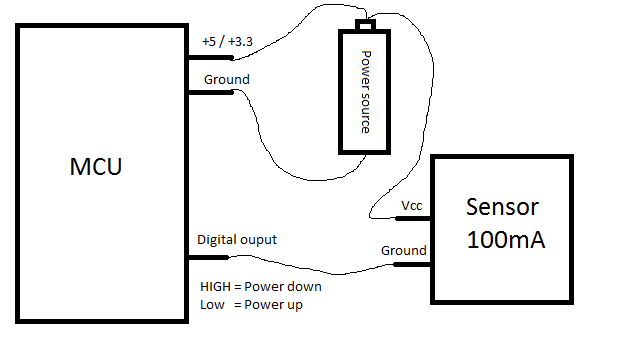 Yes, it will damage the pin.
Use a MOSFET.

This will not isolate the Arduino from the current draw of the Sensor. If you need to turn the sensor on and off a transistor would be appropriate.

PLEASE POST A LINK FOR THE SENSOR or a datasheet !

"SENSOR" tells us nothing.
There is no problem powering a 100mA load from the 5V pin on the arduino, however your "schematic"
does not indicate what type of interface the sensor will have with the arduino.
You have not indicated if the sensor output is analog or digital.

"sensor 100mA does not tell us if that is operating current or the interface current, which are totally different.
If you give us more information we can go from there.

Hi, thanks.
I’m willing to use Arduino 3.3v connected to 60mA ultrasonic sensor (but I’m not sure about peaks).
The output can be analog or rs-232. (No idle state).

WHERE is the link for the sensor ?

I don’t know where you are getting your information
because you have not posted a link for the sensor . What’s up ?

aviplot:
Is that idea can damage my Arduino?

Just do the job properly, rather than fantasising absurd connection schemes which you have not seen in any tutorial.

OK, it uses nominally 15 mA, but you are well to suspect it may have a higher peak current. This means that you need to connect a capacitor of say, 470µF across its supply terminals. It requires 5V, so you need to connect it to the same 5V Vcc that runs your Arduino - a 5V Arduino version (which most are). A 470µF capacitor may be a slightly excessive start-up load for the 5V supply if you are using the internal regulator, so if you are, you should probably have a 22 ohm resistor between Vcc and the supply to the sensor with its capacitor in parallel.

15 mA is no problem in itself, but you do need to be concerned about the total current draw of the sensors and output devices (such as LEDs) you connect.

rather than fantasising absurd connection schemes which you have not seen in any tutorial.

(that was really funny ! But that's what NOOBs do isn't it ?)

I'm willing to use Arduino 3.3v connected to 60mA ultrasonic sensor (but I'm not sure about peaks).

You need to open your eyes or drink some coffee or SOMETHING .

The sensor takes much more amps that arduino can supply (over 30 Ma for sure).

but your drawing shows this :

Then for some strange reason you suddenly decide it's 60 mA (STILL WRONG)
You repeatedly omit the data sheet link for the sensor (even though I guessed it) and then when you
do post it you didn't read it !

What does it say for working voltage of the sensor on the data sheet ? Does it say 3.3V or 5V ?
Oh, and before I forget, what about this comment ?

Where in the world did this come from ? What would possess you to think that an ultrasonic sensor would output analog or RS-232 ? (why not WIFI or GSM or 2.4 Ghz or Morse code for that matter ?)

If this continues we are going to revoke your license to practice electronics….