MB85RS64V FRAM connections to DUE

Not sure if this is the right Forum for this question, but it is about a DUE, so here goes...

I have a MB85RS64V FRAM) from Adafruit I would like to connect to my Due.

There is a wiring diagram for the UNO (nod DUE) here.

A summary of the pin connection for the UNO is:

I'm already using SCL1 and SDA1 for a RTC module. The SDA1 pin is also labelled as SCK0. If I need to use that pin for the FRAM as well, can both modules share the connection?

mlucas:
On the DUE, it looks like the SPI connector is in the middle of the board close to the CPU chip, correct?
So that means I want to connect the MISO, MOSI, SCK and power there, right?

mlucas:
The SDA1 pin is also labelled as SCK0. If I need to use that pin for the FRAM as well, can both modules share the connection?

No. It is written (see Greynomad pinout diagram): SCK0 allows Serial1 to be used for SPI, because USART0(Serial1) and USART1(Serial2) can be programmed in SPI mode, but they don't use SPI pins of the SPI connector.

Connected FRAM now works and I can read/write using the Adafruit_FRAM_SPI library and example provided by Adafruit.

Thanks for the help ard_newbie!

I would like to read/write a double which is the same as a float, however, on the Due, doubles have 8 - byte (64 bit) precision.

I'm converting the double to a byte array using a union:

There has to be a better way to write the bytes without using a loop, right?

The Adafruit library has this function when you want to write several bytes:

Since your double values are positive values, something like this code should work( Note that printf and Serial.print can sometimes give weird ressults when you print 64-bit values, depending on the compiler version your are using...):

I have one Adafruit SPI Non-Volatile like this: https://www.mouser.es/ProductDetail/Adafruit/1897?qs=%2Fha2pyFaduggLwrL12g9PfakPkXfQUUjxIBvbu8idJc%3D

and I want to use it with an Arduino Due.

I would like to test and understand the operation of the FRAM with the Arduino Due.

Once this is done, I would like to do tests with it and be able to understand how it works.

But I do not know how to do it, I can not find any help reference.

I only have this one here: 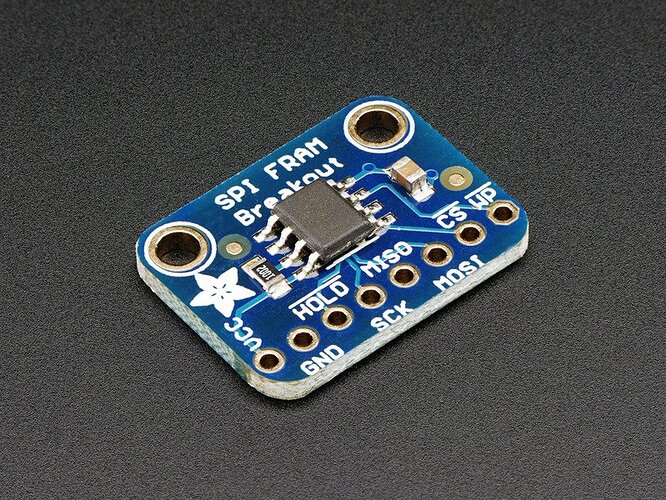 You're probably familiar with SRAM, DRAM, EEPROM and Flash but what about FRAM? FRAM is 'ferroelectric' RAM, which has some very interesting and useful properties. Unlike SRAM, FRAM does not lose the data when power is lost. In that sense it's a...

I would appreciate your help.