missing resistor on 433mhz transmitter. which one is it?

having some issues with my 433mhz modues. yes they are the cheap ones. however I have had similar modules working.

After some playing around I did some google searches and all the mx-rm-5v modules I see have a big bulky resistor on top and mine don't.
However i cant figure out which value it is supposed to have so i can solder my own on there. 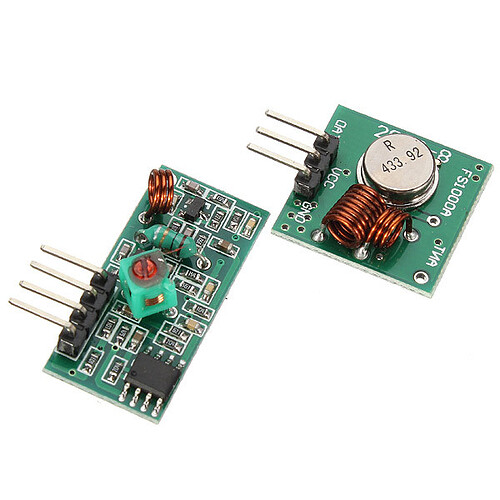 the thing is when i look up schematics of this receier module i can not find any resistor in there confirming this value. I must confess that reading those is not my strongest point.

Anybody that has one of these laying around and would be able to measure it's value for me?

will have to google a bit more and do some research to figure out what it's doing there and if missing it is a big problem.

All of my 3 modules are missing this piece so hard to believe it's an error. However i only have 4 centimeters of reach before i loose signal. these can do better i know!

What are you using for antennas? At the very least you need 17 cm of wire connected to the ANT terminal on both TX and RX.

The pot looking thing on top does not have the loctite glob on it like most of the modules showing on the internet have.

But will it work at all without that conductor?

Thank you all again for the replies

Bringamosa:
However i cant figure out which value it is supposed to have so i can solder my own on there.

What makes you think that soldering a component on yours will make it become the same as those other ones? Is it a trying luck thing?

Yes it is, unless i get some ideas from you all here on the forum.

It is not like burning 1000 of dollars if this trial and error thing is not working.

So far i tried putting an antenna on like so suggested here and on the internet, still only a couple of centimeters reach

I also have a set of the ones that were in the picture, and i actually think it's silver-gold-blue-brown, but if it's an inductor it is actually used as attenuation of a signal (maybe for setting the band) it shouldn't be missing i would open a dispute regardless. you could even try just shorting it out (maybe not the best of ideas, but it is actually shorted out to DC, just cutting out some part of AC)

Looks like there are two versions. I’ve found examples online without the inductor link

Is it possible the antenna is not correct? Or power? Is there noise on the power? I’m guessing it should be able to receive much further even if it’s poorly made.

Try another set of those radios. The better quality receivers are superhets (with a crystal), like this set.

I get 300 meters range, line of sight, with "balanced dipole" antennas as shown below and the receiver is not even of the superhet type!

Connect one 17 cm wire to ANT, the other to GND (the other antenna terminal).

yeah i get meters easily as well with my bathroom in between. i also suspect the antenna is not connected or the carrier wave isn't.

If you look closely i think you will see that they have replaced then thru hole inductor with a smd one, google smd inductor and look at the small dark gray component in the middle of where the other inductor was. and yes these suck, with a good antenna and the right orientation i get maybe 2 meters range and then i catch 1 in 5 messages...
The transmitter are OK thou, but look for another receiver.
Best of luck.

jremington:
Try another set of those radios. The better quality receivers are superhets (with a crystal), like this set.

I get 300 meters range, line of sight, with "balanced dipole" antennas as shown below and the receiver is not even of the superhet type!

Connect one 17 cm wire to ANT, the other to GND (the other antenna terminal).

Well the second module does give me about 30 meters. Will try the dipole antenna. Where do I solder this ground antenna? Any ground or a specific "antenna" ground?

Bringamosa:
Well the second module does give me about 30 meters. Will try the dipole antenna. Where do I solder this ground antenna? Any ground or a specific "antenna" ground?

Generally, the closest ground you can find to the antenna terminal.

Thanks for the responses. Got about 50 meters range now. Missing just 5 more meters. Oh well, at least I got it working and I learned a lot again. Happy new year to you all!

Search ebay/etc for the RXB12 recevers. Little yellow circuit board with one black chip on it, about a buck a pop shipped from china. They are pin compatible, and in my testing got around 20x the range at Vcc=5v, worked about as well at 3.3v as they did at 5 (whereas the green ones had a range on the order of a few feet at 3.3v), and didn't get stuck in bad states when receiving at really short ranges like the green ones can. Anything with a SYN470 or SYN480 is comparable, but the RXB12 is cheap, abundant, and pin-compatible. (there's the RXB14 which I often use - it's smaller, but eliminates one of the redundant data pins, so you can't plug it into a socket you built for the green ones or RXB12.

There's a red one that looks almost identical, but the chip is a knockoff that sucks (and they're not sold as RXB12), don't buy those.

As an aside, I have made my own SYN470-based receivers - performance was slightly worse than the RXB12 - I think due to non-ideal values on the matching network - but damn it looked sexy with everything on one PCB (I'd post a pic, but the only one I know the whereabouts of is mounted in a box and the component side is facing away from the front, so it would be a pain to take the pic)

Same problem here... until reading this topic, I thought that the receiver was damaged... I put together the TX with the RX and boom !! I see communication.. so the question is.. what was the solution ¿? or this is a bad version of 433 devices ¿?