Motor works only when ammeter is in series

I have a 12 volt motor (car antenna motor) and a 12 volt power supply rated at 5 amps. When hooked up directly to the power supply, it only grunts every second or so, and the LED indicator on the power supply flashes on, then off. (It's normally on). So it would seem that the motor is asking for just a little too much current for my power supply. BUT, if I put my Fluke 117 ammeter in series with it to check the amperage, the motor works great! Starts right up, again and again. So the ammeter shows the motor draws about 4.5 amps, running. I used the min/max record feature of my meter to check the max amperage that it draws on startup, and its about 6.3 amps.
I can understand the power supply being under rated and not kicking the motor off, but WHY would putting the ammeter in there make it work so well? It must slow down the initial surge of current somehow, to a point just below the threshold that trips the power supply???
I'm stumped...
Here's the power supply:
http://www.ebay.com/itm/New-60w-12v-5amp-AC-Power-supply-adapter-UL-Certified-for-LCD-Monitor-/190712103276?forcev4exp=true&forceRpt=true#ht_2930wt_689

It must slow down the initial surge of current somehow, to a point just below the threshold that trips the power supply?

You could try an LC filter to test your theory. I suspect a large inductor would be necessary.

Since the power supply LED comes on, then turns off, I suspect the current is a little too much without the additional resistance of the ammeter. Maybe measure the voltage drop across the ammeter to see how much it reduces the power/current when in series?

That 5A rating for the motor will be normal running current - stall current could be ten times greater, and that's what is causing the supply
to cut-out. Its not designed for low resistance motor loads, its an LCD monitor power supply after all.

When a motor is stationary and you connect it to a fixed voltage all of that voltage is across the resistance of the windings (since there is no back-EMF till the motor is turning). Once up to speed only a small fraction of the terminal voltage will be across the winding resistance, the rest is overcoming the back-EMF.

You might consider a soft-start switch for the motor - a 3 ohm power resistor is initially connected from supply to the motor, then once it is up to speed a switch is closed to bypass this resistor. 3 ohms will limit the current to a max of 4A, within the range of the supply. Conservatively rated that would need to be 20W resistor, but if its only used briefly at start up a 5W one will probably work. 2.7 is the nearest standard value of course.

SurferTim:
I suspect the current is a little too much without the additional resistance of the ammeter.

No it is the inductance of the ammeter that is slowing down the rise time of the current that is preventing the motor from cutting out. A small inductor would emulate this.

I guess I am incorrect. Last I checked, an ammeter is a "shunt bar" (low resistance in series) with a bypass circuit. The inductance/capacitance on the bypass circuit would not affect this much. But I have been wrong before...

SurferTim:
I suspect the current is a little too much without the additional resistance of the ammeter.

No it is the inductance of the ammeter that is slowing down the rise time of the current that is preventing the motor from cutting out. A small inductor would emulate this.

I don't know anything about inductors, but would like to learn more. What specs do I need to look for and what size inductor would you consider good? It's a 12 volt motor that draws 4.5 amps on run. I'm going to bump my power supply up to a 14 volts 6 amp, supply, but expect I'll still need an inductor. The motor only runs for a about 4 seconds at a time, to raise lower a car antenna, (in a different application, though).
Thanks,

What specs do I need to look for and what size inductor would you consider good?

The value of the inductor is not terribly critical. I'm thinking 100uH should do the trick. Something like this... 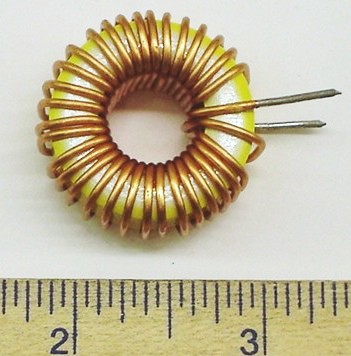 If you can find a toroid to use, it would be the best choice. They don't radiate a lot of EM. The definitive solution would be to use a bigger power supply.

I found this. It's 100 uH, and it current rating it 7 amps. I assume I put it in series with the motor, which means it has to handle the motor current of 4.5 amp continuous?

That coil looks good to me, if indeed the inductor would solve the problem. More empirical evidence would be needed to say for sure. So, rather than ordering a part, perhaps you could find something to cannibalize. Computer power supplies are chock full of inductors, as are old TVs.

Still... A much larger power supply that's meant for inductive loads would be the best measure. Check the following link for another possible solution regarding NTC resistors

I'll be powering this motor via PWM from the VNH2P30 motor controller, and the motor will never start at full PWM, because of the joystick control I'll be using. It will turn on at 10% PWM. Maybe this will solve the problem altogether? Will starting a motor via 20Khz PWM @ 10% cause this inductance field of the motor to have less of a current rush? 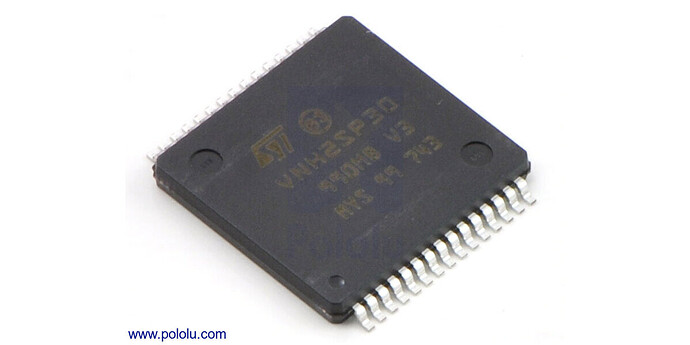 The VNH2SP30 is an improved version of the VNH3SP30 motor driver, featuring current sensing, increased drive capability, and a higher maximum PWM frequency of 20 kHz. Note: This driver has been discontinued by ST. We recommend the newer and very...

It may work, depending on the inductance of the motor. Low duty cycle PWM may make the motor look like it's starting softly, but there could still be a lot of reactive power in the windings. 20kHz seems like a high enough frequency to cause a decent amount of impedance in modestly inductive motor windings. I'd still run the test with the inductor first, and add it to the final design if the power supply continues to fail without it.