I'm new here and have no idea what I'm doing...

I have these 2 .ino files for a midi footcontroller with an Arduino Uno board in it. I did not build this but bought it.
I installed the Arduino app to compile them but I get all sorts of error messages. Like I said, I have no idea what I'm doing, and this stuff really is way over my head.
So I was wondering if one of you fine people might be able to compile it for me... I would be very thankfull.
I've attached the files to this post.

The files are two *.ino files. They should be in the same project folder.
In the Arduino IDE (the software environment with the sketch and compiler) you should have both files loaded, each in a tab. You can use the drop-down button on the right to create a new tab.
You could upload a screenshot of that, so we are sure it is right.

When you start compiling, first set the right Arduino board that you will be using.
The first error message is the most important. You could tell what it is, or upload a screenshot of that.

To learn about Arduino, it is best to start with the Arduino Uno board and try a few examples like a blinking led. You want to start with something more advanced. Perhaps you can try that blinking led example, to see if you can make that work.

Thanks for the quick response.

The midi footcontroller is a Disaster Area DMC-6. It’s a small company that builds custom midi footswitches.
It came with a firmware already installed, and the source files (the 2 i attached before).

Here’s the screenshot after an attempt to compile: 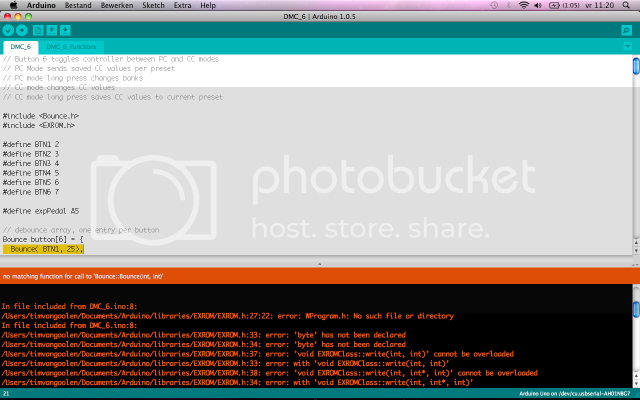 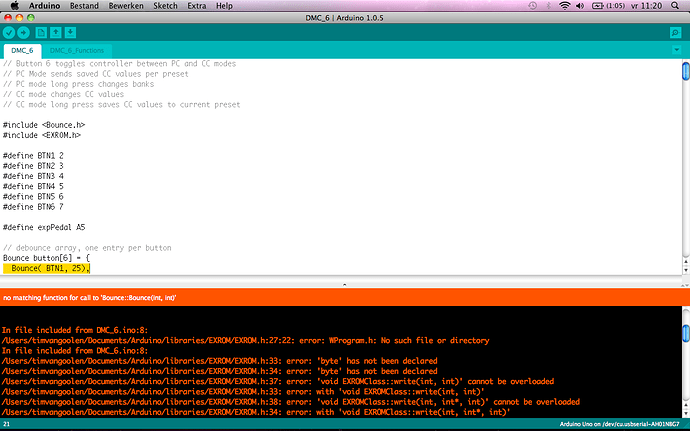 Got it to compile!

Apparently I had a wrong version of the libraries installed.

Thanks for having a look.