First I want to say two things:
I have practically no experience coding. Please bear with me.
I really really appreciate you for reading this very long post and helping me.

The project:
I want to use an analog RGB 5050 LED strip to simulate a sunrise, daytime, sunset and nighttime lighting atmosphere in my fish tank.

I will wire it to the PWM ports on the following Arduino controller:
http://www.amazon.com/SainSmart-ATmega328P-CABLE-Included-Arduino/dp/B006GX8IAY/ref=sr_1_1?ie=UTF8&qid=1391650203&sr=8-1&keywords=sainsmart+arduino

The wiring schematic is as described on this site: 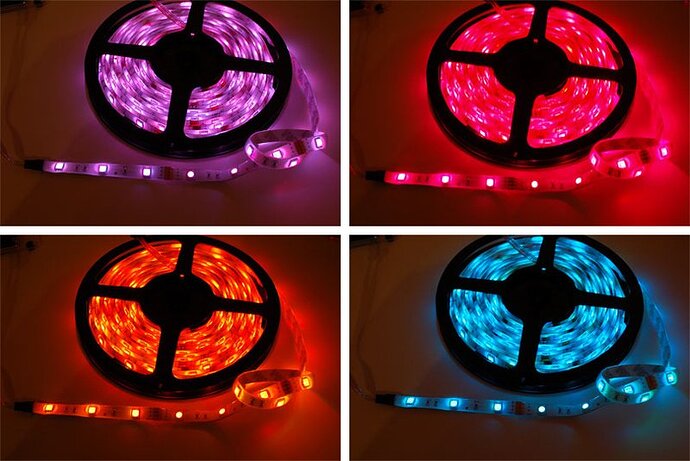 We love some good LED blinking as much as the next person but after years of LED-soldering we need something cooler to get us excited. Sure there are RGB LEDs and those are fun too but what comes after that? Well, we have the answer: LED Strips!...

I plan to use the VaRGB library and take advantage of the linear and constant transition curves
http://flyingcarsandstuff.com/projects/vargb/

In the VaRGB guide it mentions using a callback to communicate with the RGB strip.
http://flyingcarsandstuff.com/projects/vargb/using-vargb/#programming-vargb

I'm not sure how to get this callback done.

I also plan to use an RTC module such as this:

How do I integrate this RTC module electrically to the Arduino and also through the code so I can program my VaRGB linear/constant curves based on time.

I'd like to program various curves to run simultaneously for very smooth fading and transition. But I can also run the curves sequentially as I've outlined below.

Basically the color transition would be:
Sunset (opposite for Sunrise)
Start at the end of the constant white curve.
The lights change to a bright yellowish white, then a medium brightness orange, to a dark red, to a twilight blue down to very dim dark blue as a moonlight.
In the morning the RGB spectrum would be (on a 0-256 scale)
Red 0, Green 0, Blue 10 (Moonlight)
I would ramp up to Red 20, Green 0, Blue 10. (Dark Red)
Then I would ramp to Red 30, Green 0, Blue 10. (Medium Red)
Next would be Red 40, Green 30, Blue 15 (Medium Orange)
After that would be Red 50, Green 50, Blue 20 (Yellow)
And from this I would ramp to Red 100, Green 100, Blue 100 (White)
I will be playing around with these colors. This is just an example

Then I would add all the transitions to a schedule:

Then I could set the desired schedule into the driver as:

I don't know how to do the callback but this is what is on the site:

This is assuming I use the TinyBrite library. Would I just remove the "the_brite"?
I don't know what library I would be using.

After setting up the callback you set up the driver like this:

I just found this thread and noticed it is quite old. I was wondering if you have figured out any of your questions on your own, and how is the project progressing?

I am interested in doing a very similiar project. I am looking to create the same kind of dawn to dusk to night time scenario for my model train layout. The only difference is I want to have the program run on a model railroad fast clock time table where a 24 hour period can be run through its cycle in a 4 hour time frame.

I too am very new to this venture, and you seem to be way ahead of me in knowledge. Right now I am searching the web for someone who has tried to accomplish the same thing I am in search of. I found yours and hoped you have had success in proceeding. Any updates would be appreciated.