Gang,
I need some help finding a new laptop.
What I have now: Sony Vaio. 15.6" screen. Intel Dual Core T6400 2 GHz. 3 GB RAM. 240 GB hard drive. Win Vista SP2. 32 Bit operating system. Nice, standard keyboard, not one of the new chiclet style. No number pad so the keys/touch pad are more or less centered with the screen. You've probably seen it in pictures with some kind of processer board sitting on it.
Surface wraps around the corners nicely, no sharp edges.

I am looking for something faster now. Intel i7 quadcore processor, 8GB of RAM to go with it. 15.6" screen is fine with me (8.5" x 13"). 1 Terabyte solid state drives I think are becoming the norm.

I had a Samsung that I thought was gonna do the trick, but I took it back. I really tried to like it, but it had flaws.
The 15.6" screen was actually less high. The edges were 2 pieces, and had a sharp inner edge that grated on the forearms. The keypad had a number pad on the right, so the keys were really off center when being used. And the keypad- one of the chiclet models. I tried if for 5 days and gave up. The keys had no feel, they were off center, ended up using the backspace key more than any other.
(No DVD drive either, external needed to listen to CDs, watch DVDs, install older software).

Back to Best Buy, looked over every i7 model they had, Not One Good Keyboard! Apparently the new style is the chiclet keyboard so the keys can be backlit.

So: who's seen a good i7 laptop with a decent keyboard? Sony.com is only showing chiclet style now. 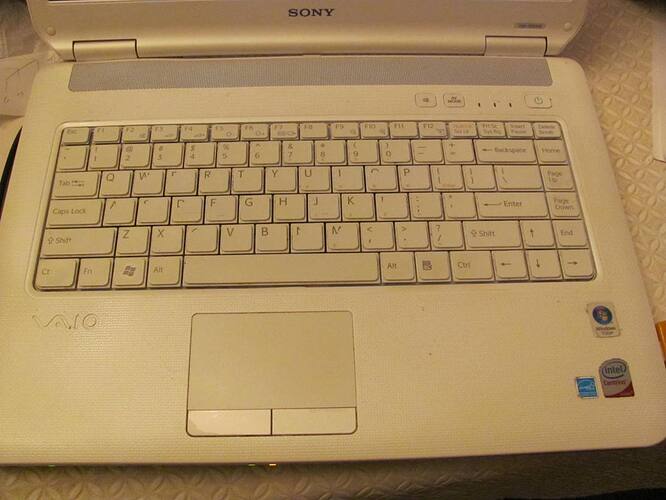 I went through something similar recently --just couldn't identify anything I liked in a price range I could justify. So I bought a not-too-old second hand business class laptop from one of those places that deals in ex-lease machines. No OS, so I save a bit of money of there. Having to pay pay for Windows 8 (even indirectly) would just add insult to the injury!

Lenovo. Hands down best laptop keyboards on the market. I have one of their Y500 series laptops. Core i7, 8gb of ram, 64gb SSD/1TB HDD, Nvidia 555m GPU, blu-ray reader/writer combo. It also has really nice power management software that throttles down the CPU and disables the GPU when you don't need it. I get roughly 6 hours of battery life while taking notes (after a one year break in period), yet I can still play the newest video games on it, run multiple VMs, do image and video processing, etc.

And just in case you didn't know, Lenovo is the arm of IBM that used to make Thinkpads. They split off from IBM a while ago.

wizdum:
And just in case you didn't know, Lenovo is the arm of IBM that used to make Thinkpads. They split off from IBM a while ago.

And now Chinese owned, in fact.

1 Terabyte solid state drives I think are becoming the norm.

If you don't mind spending $600 for the drive

"chicklet" keyboards seem to vary quite a bit; I was really worried when my Mac arrived with such a keyboard, some years back, but I got used to it pretty quickly and I think it's one of my favorite keyboards... It doesn't really seem to have less key travel than the average laptop keyboard, and the keys are a bit further apart, which I seem to like.

At work we have used Lenovo and Toshiba laptops for years (a total of a few dozen computers). Lately we have been leaning Lenovo. With the exception of a Toshiba Netbook that overheated and a Lenovo with questionable video driver they have all been good computers. We always buy directly from the manufacturer.

be sure to reserve some budget for a good backup solution.
If solid states fail, rescue is not as straightforward as HD's

At my sons college all students are required to have a common laptop with selected software. Lenovo T430. Played with it a few minutes today while visiting. Think I will get similar, but W530 instead, lite bigger screen and step up the processor. Keyboard is nice for typing on and does
ot have number pad to skew the letter/touchpad spacing to the left. Nice front edge too.

Hi, ACER ACER ACER, I've had toshiba, hp, lenovo and none stand up to ACER.

If you use Processing Open Project be very careful, try and run a 3D sketch on the laptop or desktop.

My works toshiba will not run Processing 3D because of the fact that the video chip set does not support the graphics set that Processing uses, even though it says so in the specs and documentation.

My ACER is Aspire V3-571 with spread keyboard keys, that is each key has a square hole in the keyboard panel for that key.
Not keys stuck close together with gaps.

It also has a decent power plug on the side, the plug is a right angle, I've seen too many straight power plugs and the damage that they do to mother boards as they apply torque to solder joints that are not designed for it.

Too late for me, is already being shipped.I tried my sons T430 and I think I'm gonna like the W530.

CrossRoads:
Too late for me, is already being shipped.I tried my sons T430 and I think I'm gonna like the W530.

Sounds like a good choice to me.
I had a couple of lenovo's now. They are not the fanciest looking when you buy them. But compare them to a similar aged laptop in a couple of years and you'll be really happy. I have a T410 now with 8 megs of memory. If I could increase that I wouldn't want to switch it. (I'm running multiple vm's at the same time)
The only drawback of a W530 is that it is a portable pc in spirit of the original means of the word. ]

Lenovo W530 arrived. Had to connect a cable to download Intel drivers for "Centrino Ultimate N6300" wifi, seems to be working well at the moment.
Installed Chrome, IDE 1.0.5, Eagle 6.5. Need to move my design & library collection over next ...

Ohhh, the joy of setting up a new system ,nice and clean and orderly, for how long.......

TomGeorge:
Ohhh, the joy of setting up a new system ,nice and clean and orderly, for how long.......

I bought a big nas. It wasn't cheap but it really helps.
Best regards
Jantje