Need help getting a small motor to operate

Hi everyone! New to your community, brand-new to electronics and programming in general. It's a field that I've always admired but just never had the head for. Hopefully, somebody can help me out with what I'm sure is a very basic task:

I've recently been asked to perform a demonstration at the end of the week using a Duermilanove board and the small motor that I have pictured. It's really simple: I have to turn the motor on and off. It doesn't have to run at any particular speed or pulse or anything at all; it just has to fire up when I run the code. Besides the motor itself, these are the only materials at my disposal:

Unless it's something readily available at say, Radio Shack, that's all I'll have to work with. I'm a sculptor by trade, and I use nonfunctional electronics in my work, so I have soldering skills and tons of wiring, but that's about it. My knowledge of coding is very limited, as well. I'm kind of the wrong guy for the job, but it can't be helped.

Any help would be appreciated. I'm on a timetable, and it's my butt if I can't get this running, so any advice would be a serious act of kindness. Thanks, guys!

The motor. No idea about what type it is. It has a gearbox attached that I can probably remove:

Well, 9 times out of 10, you'll need some sort of external power source. I know I've said this at least 50 times to various people (I don't mind repeating :)), but the Arduino can only power the smallest of motors alone.

What I recommend is using and external power source (experiment with the motor alone to see what it requires), regulated by a Transistor (radioshack has some). The transistor will be controlled via a pin on the Arduino.

I know there's a transistor/motor tutorial around here somewhere....

Killer! I know I can pick up an external power supply and a transistor tomorrow. Now, here's the first dumb question: do I need like a specific, dedicated adapter or plug to fit the Arduino jack? It looks like a 2.5 mm x 5.5 mm jack on my board, or am I horribly wrong..?

So, other than power supply, are there going to be any other issues? Am I missing some crucial component? Please let me know; been plugging away at this without much luck..

You will also need a diode to protect your Arduini against back emf spikes from the motor, this is very important.

Check second schematic on this page: 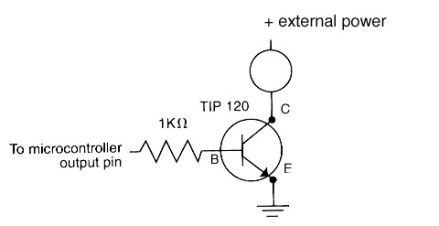 tip120 transistor: controlling dc motors and lamps from the arduino

Some diagrams illustrating how to use the tip120 transistor to control 12 v (actually up to 60v dc) 12 v lamp: DC motor (only difference is the diode connected between collector and emitter. A deta…

Ah, okay. Any particular type of diode? I see that there's tons of different ones, and I'm unsure what the energy requirements are for this motor (though I suspect it's a 9v.) Like I said, I'm pretty much completely unfamiliar with these items.. :-[

Hi. I'm relatively new to Arduino also, but have managed to make other functioning electronics 'nonfunctional' :-/. However, my intentions were not scupturistic.

plug to fit the Arduino jack?

Yes, if you are not going to demo the Arduino while plugged into PC/MAC etc USB, then supply external power thru the jack. Look for your board's specific datasheet on the main site www.arduino.cc, or search a little on the forum. You can use an AC Adapter to supply DC (check the datasheet, I'm using 7.5V). Some people use a 9V battery thru that jack (limited life in batt). Use a separate power supply PS for the transistor to motor (but connect the PS ground back to Arduino).
http://www.arduino.cc/playground/Main/ArduinoCoreHardware

You might want to have some extra resistors on hand. It seems 1K ohm and 10K ohm are commonly called for, depending on project. Most 'starter kits' recommend/include a few LEDs... easy way to confirm something's working/happening on the pin you target.

Thanks, guys! It was tough, I think mainly because I'm using an electric motor, but with your help I've puzzled it out and achieved success. Much appreciation to you three for your help!