Hello,in the past i successfully built a 2 axis cnc machine with a servo moving the z axis of the pen (using ld293 as stepper motor driver for the dvd steppers).

I now bought 2xpololu drv8825 to use with 2 stepper motors from dvds.
I have successfully built the cnc machine and axis but i have questions regarding current.

I know that using dvd Stepper motors voltage is not the crucial thing to work as current is.
I know that the drv pololu 8225 works in the vmot in the range of 8 to 45 volts.
And it has a current limiting trimmer.
My question is what is maximum current those dvd steppers can work with ?
I know there is a way to find out the watts that would be dissipated as heat if i use the formula to calculate if i know the resistance of the coils. i found this online from ti http://www.ti.com/lit/an/slva504/slva504.pdf in chapter 2.2 power calculation it has a drv8825 but i cant find info regarding dvd steppers to calculate how much heat will it produce.

2)would it be possible to attach a small heatsink or fan located somewhere to cool down this motor?
Thank you!

What size (in mm) is the stepper motor - that will probably be a major clue to how many watts it can use.

What is the resistance of the coils?

its stepper motor i took out from dvd,a bipolar stepper motor,the only thing i found online is this
,are all dvd steppers like this one ?
http://robocup.idi.ntnu.no/wiki/images/c/c6/PL15S020.pdf

I measured around 9.6 to 10 Ωm resistance on the two pins,and 5.6 to 6 Ωm οn the remaining 2 pins.Now regarding size it is like this 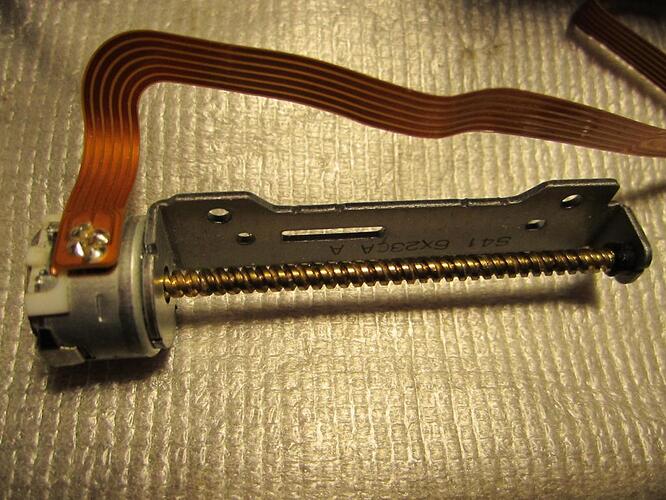 That datasheet says 5v and 10 ohms so my guess is that its max is about 500mA. I suggest trying it at 200mA and seeing how hot it gets in use. If it is not too hot then you could try a higher current. It should be OK up to the point where it is just about uncomfortably hot to touch with your fingers.

Obviously settle for the lowest current that will give you adequate torque.

I connected my dvd steppers according to this diagram Connecting Grbl · grbl/grbl Wiki · GitHub the last one where it has the 3 pololu drv 8225.I set the current limit to 0.2amps everything is connected,it should work,i uploaded arduino sketch.But i cant move the stepper motor.The grbl is connected the commands $ work but there is no movement.

/i know that pins 2-3-4 are the step pulse for xyz and 5-6-7 are the direction axis,am i doing something wrong?what should i do to make the stepper motor move?

Have a look at this Simple Stepper Code and use it to get one motor working.

Use the wiring diagram on the Pololu DRV8825 web page. Fritzing diagrams look very clever but they are very easy to misunderstand.

Are you sure you have correctly identified the wires for the two pairs of motor coils - don't relay on wire colours, chck with your multimeter.

Be VERY CAREFUL not to allow a wire between the driver and the motor to disconnect while the driver is powered up. The driver can be instantly destroyed.

the wires are connected correctly ,i used the connectivity test and they match,Each of those making a beep is connected to the correct pair of pins,but nothing the dvd motor does not move at all.could i have killed the pololu?the vref pin shows the correct voltage though i can trim it up and down.Now it is around 0.20V.that would allow a maximum of 400mA which is the max this dvd stepper can take.

i tried to connect a pm42m 048 bipolar but this requires 24v and i dont have a 24v volt only 12.And after raising the limit of vref to 1.3 amp for the pm42m it did nothing.am i missing something?maybe the fritz diagram needs the other pins that are not connected?

So the sleep and reset signals were missing and not connected when i connected them the motor started to move.

Now i need some help regarding stepper motor configuration,i know that this dvd stepper has only 40mm or so that can move,how do i define the grbl so it moves within the limits of that dvd stepper?other stepper motors like the neam17 are documented for the rods steps per rod etc.Has anyone done something for dvd steppers?

Nikodr:
the wires are connected correctly ...

Have you tried my simple stepper code?

Robin2:
Have you tried my simple stepper code?

In the fritz diagram 2 pins were not connected ,one was the sleep,when i connected them to 5 volt logic power,the steppers worked fine.Then i installed the grbl 1.1 firmware on the arduino
Now i need to find the correct information regarding dvd steppers.to setup the grbl 1.1 configuration,any idea where to find info regarding steps/mm step/rotation for such steppers?

Nikodr:
In the fritz diagram 2 pins were ...

It doesnt work.And i dont know why.But i am able to move motors by using the grbl firmware uploaded and the program universal gcode sender.

Nikodr:
It doesnt work.And i dont know why.But i am able to move motors by using the grbl firmware uploaded and the program universal gcode sender.

First of all, what doesn't work?

Second, because of the way you quoted my question in Reply #12 and did not answer the question I did not notice that you have managed to get the motors to move.

Now that I have read Reply #12 more carefully I still don't understand which software you were using when you got the motors to move. It reads as if you had them moving and then uploaded GRBL and then they did not move. But, from reading your Reply #14 it seems that they are working with GRBL.

If you are now at the stage where you need help with configuring GRBL you may get more useful info on a CNC Forum or on the RepRap Forum where there are people who use GRBL regularly. I have never used it myself.

Sorry for the misunderstanding.
I could not move the motors because 2 pins were not connected (the wait and sleep),when i connected them they started to move with the grbl firmware 1.1 and universal gcode sender.I now need info regarding the steps per rotation and etc.

Your program is not working unfortunately,though i think yesterday it did work.
Maybe it has to do with current limit,i had it at 0.5 amp yesterday but that would mean over 1amp (because dvr8225 and 4988 vref if it is x then it is 2xcurrent),those dvd motors are maxium at 400-500mA so i lowered to 0.25V.Grbl works but your program not.